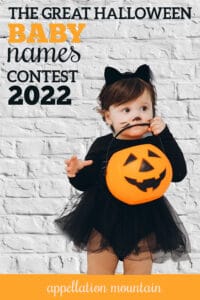 We’ve made it all the way to the SemiFinals in the Great Halloween Baby Names Contest for 2022!

That means that we’ve reduced our list from sixteen contenders to eight to now just four last names standing.

Before we move on to this week’s competition, let’s look back at last week’s results.

Eleonora ousted Madeline, claiming over 59% of the total. While Madeline is more popular in the strictest sense, Eleonora has the markings of an AM reader favorite. It’s traditional with a twist, a name with just enough history and backstory to feel grounded. But it feels surprising and unexpected, too.

By just a single vote, Lenore snuck past Annabel. On paper, it’s 50.25% versus 49.75% … but that works out to exactly one vote different. You know what they say about every vote counting … So while Annabel might be the quintessential Edgar Allan Poe name, immediately bringing to mind his mournful poem, it’s spare, tailored Lenore that advances.

Camille took over 58% of the tally, knocking Helen out of the contest. These two names both have a capable, serious side. But Camille, blending gently French style with a tragic backstory, might be the better representative of Edgar Allan Poe names. It also helps that Camila is a fast favorite in the US right now.

In another close match-up, Eulalie triumphed over Alessandra by fewer than ten votes. We’re more likely to hear Alessandra on a playground, but Eulalie is an irresistible rarity. While this contest was close, with 51% of the total, Eulalie is the name that advances.

TIME FOR THE SEMI-FINALS, BUT FIRST …

If the opening round eliminated the most unusual names, then the quarter-finals knocked out the names that feel a little predictable.

No matter which name ultimately wins the Edgar Allan Poe edition of the Great Halloween Baby Names Contest, it will hit a sweet spot. Different enough to feel literary and dramatic, but still wearable for a real child.

Once again, it’s time to vote!

Choose the name you love most, either because you might consider it for a child. Or simply because you’d love to hear it more!

The contest remains open until Thursday, October 20, 2022. Come back on Saturday, October 22nd to see if your favorites advanced. And, of course, to vote in the next round.