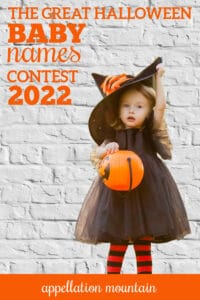 The final round is here!

We’ve voted our way through Edgar Allan Poe’s most haunting character names. Some of the most obvious picks have fallen over the past three rounds. We’ve bid farewell to Annabel and Raven. (Which, okay, isn’t a character name. But is undeniably forevermore connected to the poet.)

As of last week, we had four names still remaining. Your votes have narrowed it to just two, and now it’s (almost) time to vote and choose a winner.

Let’s look back at the results from the semi-finals.

Eleanora triumphed over Eulalie. That seems like an obvious choice. Eleanora is just different enough, an elaboration of popular classic Eleanor. Still, Eulalie making it all the way to the semi-finals suggests that the lovely, rare French name might have potential, too. The final count was nearly 67% for Eleanora.

Camille won over Lenore. But this time, the margin was razor thin. A mere two votes took Camille over the top, with just over 50% of the tally. Like Eleanora, Lenore is another name related to the chart-topping Eleanor. Camille, likewise, is cousin to current favorite Camila, but also shares the sophisticated French style of Top 100 Josephine and Charlotte.

In terms of how the names fit into Poe’s tales?

Eleanora is at the center of a short story. There’s a tragic death – it’s Poe, after all – followed by an uncharacteristically happy(ish) ending.

Camille, on the other hand, is one of the two victims in “The Murders in the Rue Morgue.”

Neither is especially associated with Poe in the popular imagination, but they share a sort of antique charm that marks many of his character names.

And that, of course, brings us to our final match.

Which will win the Great Halloween Baby Names contest 2022? Your vote decides …

Voting remains open through Thursday, October 20th. Please check back on Saturday, October 29th to see if your favorite wins!