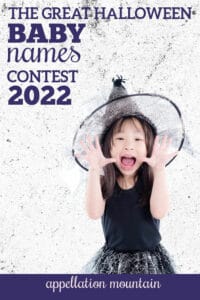 Time for the Quarter Finals in the Great Halloween Baby Names contest!

The Opening Round is over, and your votes have narrowed our list of dramatic, romantic Edgar Allan Poe-inspired names from sixteen to just eight.

Madeline swept past Ulalume, with almost 68% of the vote. That’s a win, but it’s not exactly a landslide. A number of these haunting choices from Edgar Allan Poe’s works of fiction fared better than you might expect – even if they didn’t advance.

With nearly 81% of the vote, Camille trounced Ligeia. Erm … maybe the Poe-specific names do have a hard time against more broadly popular choices?

In the biggest win for the night, Alessandra took nearly 86% of the total against Lalage. This was a heart-breaker. I was really pulling for Lalage! Still, Alessandra is the kind of name that’s just different enough to have serious appeal, while Lalage would be a nearly unique choice.

Eulalie triumphed over Raven, with almost 57% of the total. Proof that not every mainstream name won out!

By a similar margin, Helen won over Jacinta, with just under 57% of the votes. The contest between these two names was close, but classic Helen ultimately won out.

Lenore defeated Rowena, claiming just under 59% of the take. A few years ago, Rowena was the runner-up to Luna in the Harry Potter edition of this contest, so I thought it might win. But nope. Lenore, a variant of traditional favorite Eleanor, topped the contest.

With over 80% of the votes, Eleonora advances against Berenice. Maybe there’s a theme here? Because another Eleanor cousin, Eleonora, carried the day in our final match-up.

As is often the case at Appellation Mountain, the most unusual names are voted out early. Not because we don’t love them, but simply because we love other names more. A name’s association with Edgar Allan Poe didn’t helm or harm it, necessarily. After all, Annabel is strongly associated with Poe’s poem, but still triumphed. While Raven, another strongly Poe-centric possibility, couldn’t win.

So once again, it’s time to vote!

Choose the name you love most, either because you might consider it for a child. Or simply because you’d love to hear it more!

The contest remains open until Thursday, October 13, 2022. Come back on Saturday, October 15th to see if your favorites advanced. And, of course, to vote in the next round.