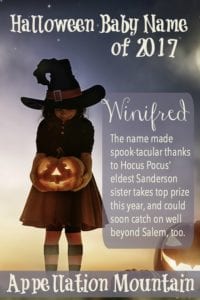 Our Halloween baby names showdown has come to a close for 2017. The witches win!

Winifred was the last witch standing, beating out Hermione, Sabrina, Tabitha, Thessaly, Millie, Willow, and Piper to compete in the big final showdown.

The bewitching name faced off against Amelie, the vampire queen of The Morganville Vampires fame. Amelie bested Esme, Elena, Claudia, Drusilla, Sophie-Anne, Mavis, and Lucy to make it to the final round.

What explains the victory?

Some of it comes down to the witch herself. Hocus Pocus wasn’t a smash hit when it was released in 1993. (In July, believe it or not!) But since then, it’s become a go-to Halloween movie for a generation, earning a place with classics like It’s the Great Pumpkin, Charlie Brown. In 2015, Disney World introduced the Sanderson sisters stage show as part of their annual Halloween festivities. And now there’s even an all-day Halloween viewing of the movie on at least one cable channel. (I’m watching Bette belt out “I Put a Spell on You” as I write this.) 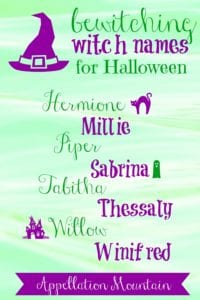 So I think the Sanderson sisters are enjoying a renaissance, probably because children of the 1990s are now parents.

But Winifred also wins because we’ve been falling in love with Win- names, from Winnie to Winter, in recent years. And it fits the vintage name-with great name nickname style of Abigail and Eleanor and so many other favorites.

For now, Winifred remains well outside of the current US Top 1000. But the name has been given to more than 100 girls over the last three years, up from a low of just a dozen or two during the 1990s and early twentieth century. That makes me think that this name is showing signs of revival.

Of course, Amelie put up a good fight, too. That reflects the ongoing appeal of all the Emily-Amelia names, as well as Amelie’s specific popularity. It re-entered the US Top 1000 in 2003, and has consistently charted in the 600s in recent years. That’s no Sophia or Isabella, but it’s a solid showing from a lovely, imported name.

But this year’s contest goes to the bewitching baby name Winifred.

Thanks for voting, and Happy Halloween to everyone!