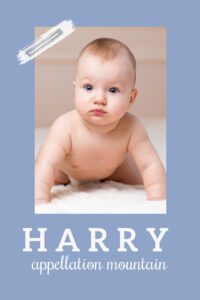 British parents are wild about the baby name Harry. It’s cozy, traditional, cool – a brother for Jack, an alternative to Charlie. American families haven’t quite caught on. At least not yet.

Thanks to Charlotte for suggesting our Baby Name of the Day.

HENRY, BUT MAKE IT COZY

Many will recognize Harry as a traditional nickname for Henry. But it’s not obvious why.

We know that Henry has Germanic roots. The original form was Heimrich, then Heinrich. It means “home ruler.” The meaning of the name Harry is identical.

The Normans invaded England in the eleventh century. They brought Norman French names with them, which often had Germanic roots.

Pronounce Henri in French today, and it sounds almost like on ree.

It quickly became smoothed out to Harry in medieval England, as the Norman Conquest took hold and names changed accordingly.

Now Henry – and especially Harry – sound as British as can be.

That British vibe has lots to do with Prince Henry Charles Albert David, second son of Prince Charles and Princess Diana, born in 1984 to world-wide applause. It was quickly announced that the new prince would be called Harry.

With red hair and a reputation as a fun-loving, relaxed member of the royal family, the prince was a favorite with the public from early days. And the world has always called him Prince Harry.

Many a royal sibling fades from the spotlight, but the opposite is true. Prince Harry’s marriage to American actor Meghan Markle, the couples’ struggles within the royal family, and their eventual decision to leave England behind for a life in the US has attracted much attention. The births of their children, Archie Harrison Mountbatten-Windsor and Lilibet Diana Mountbatten-Windsor, have also attracted headlines.

Now known as the Duke and Duchess of Sussex, the couple is likely to remain in the spotlight, along with Prince Harry’s preferred name.

Of course, not every Harry is a Henry.

The baby name Harry has ranked as an independent given name in the US from 1880 into the 1910s.

It can also be short for Harrison, Harris, and Harold, to name just three. Maybe Horace? Sanskrit offers us Hari, a name related to the Hindu god Vishnu, which potentially makes Harry a culture-spanning choice, too.

Upbeat anthem “I’m Just Wild About Harry” was originally written for the Broadway musical Shuffle Along.

Much-revised – and almost jettisoned more than once – the song became a hit in 1921, and again when future president Harry Truman chose it for his campaign’s song in 1948.

We’ve mostly forgotten Shuffle Along, though it has a fascinating history. In brief, composed by Eubie Blake, it would become the first all-Black hit Broadway show. It helped usher in the Harlem Renaissance of the 1920s and 30s, launching the careers of many a performer, including Josephine Baker. A 2016 adaptation focused on the difficulties of bringing the show to Broadway in 1920s America, and the way it changed theater.

Odds are you know at least the refrain of the song.

Judy Garland covered it. So did lots of other famous singers.

It time stamps the name in the past, a sepia-toned antique.

And so it would take a solid century before the baby name Harry returned to its prominence from earlier days.

A century … and a few famous figures.

In June of 1997, the world learned all about young Harry Potter, an unfortunate orphan living with a truly awful uncle and aunt. But he’s really a wizard, destined to attend Hogwarts School of Witchcraft and Wizardry, under the watchful eye of headmaster Albus Dumbledore.

And while they hope it’s not the case, from that very first book onward, it’s clear Harry’s also meant to eventually confront the dark wizard who killed his parents and almost conquered the entire Wizarding World, the self-styled Lord Voldemort.

The tale unfolds across seven bestselling books, which became eight equally successful movies. That’s not including countless related projects, from Universal’s Wizarding World of Harry Potter in their theme parks to Halloween costumes to the Fantastic Beasts franchise.

Here’s the thing about the baby name Harry. Long before we’d ever heard of Hogwarts or Hermione Granger or Gryffindor House, English parents had embraced cozy, casual nickname names.

Harry ranked in the England & Wales Top 20 in 1997. Alfie, Billy, Max, Sam, and Joe were Top 100 picks, most of them gaining in use. Jake outranked Jacob; Charlie was slightly more popular than Charles; and Jack topped the charts at #1. No surprise that the baby name Harry outranked Henry by quite a bit.

Sometimes fictional characters boost a name. But quite often, they simply have the names that are already popular. For an English audience, the name Harry represented the latter.

In fact, future One Direction member Harry Styles was born in 1994, meaning that his given name was very much in step with 90s favorites.

Harry Styles entered The X Factor competition in 2010 as a solo artist, only to be paired with four other teenagers. Together, they became One Direction.

The group went on hiatus in 2016. While all five have since launched solo careers with some success, it’s Harry that has become the mega-star. In addition to best-selling albums and #1 songs, he’s branched out into acting. He won accolades for his part in 2017’s Dunkirk.

Since then, he’s even cameoed in The Eternals, setting him up to appear as Thanos’ brother Eros in future films. His next movie is Don’t Worry Darling, due out in late 2022.

A noted fashionista, he’s also the first man to appear solo on the cover of Vogue.

So if you thought Harry was your granddad’s name, Styles has done quite a bit to shake off the dust.

Except not the US.

But the baby name Harry languishes at #722.

The fictional hero and the successful singer haven’t changed parents’ opinions about Harry, at least not in the US.

One possible reason? Pronunciation. Some insist that Harry sounds too close to hairy, or just plain quarrel about exactly how to say it. The differences, however, are slight – and it hasn’t stopped Olivia from reaching the top of the charts.

So maybe that’s an opportunity.

As casual as Jack, as cozy as Charlie, Harry is a name that everyone knows but few families are choosing.

You could name your son Harrison – or Henry or Harold – and call him Harry as a nickname.

But it’s also an appealing possibility in full, a brother for Max or an alternative to Gus.

What do you think of the baby name Harry? 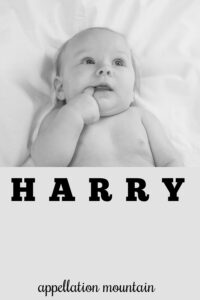