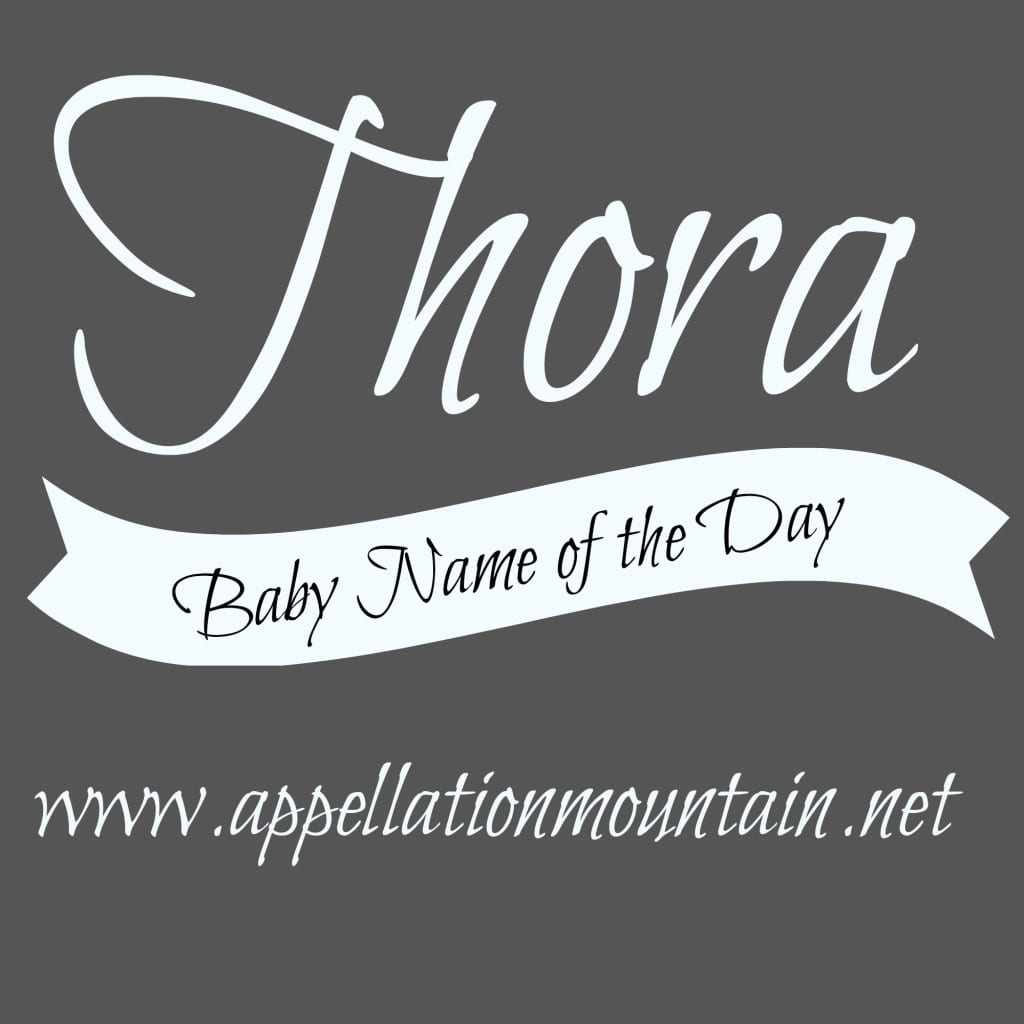 Thor is a thunderbolt-wielding Norse god.  But add an ‘a’ and you have the feminine form, and a very different vibe.

Thanks to Bertram Bergamot for suggesting Thora as our Baby Name of the Day.

Maybe Thora isn’t the most obvious pick for a daughter in 2014.

But 21 is actually an increase – Thora averaged fewer than ten girls given the name per year for the last few decades.  Another factor in her favor?  The rise of -ora names, discussed in Nameberry’s Floradora Girls post.  There’s Downton’s Cora and the wildly popular Nora.  So maybe Thora has a chance.

She’s a forceful choice for a daughter.  Thor means thunder, and he’s also in charge of tough guy things like strength and war.

While there is no goddess by the name, she appears in Norse myth and folklore.  Thora Borgarhjort was a lovely young woman given a pet snake.  When the snake gets out of control, a hero arrives to slay it.  They marry and live happily – for a while.

While we’re in Scandinavia, let’s pause for a note on pronunciation.  She’s pronounced without the ‘h’ – Tora.  But in English, you’ll almost inevitably hear the thunk-thud-think Thora instead.

Part of that credit goes to young actress Thora Birch.  She’s been acting since she was quite young.  Her breakthrough role was in 1999’s American Beauty as Jane, the damaged daughter of Lester and Carolyn.  She’s also known for her role as Enid in 2001’s Ghost World, followed by a string of indie flicks.  She has a brother named Bolt, so presumably her parents were aware of the name’s power.

That’s not much use.  Maybe some dismiss Thora because she shares her first syllable with thorax and thorn.

But when I hear the name, I get a very different vibe.  I think more vintage black-and-white Theda Bara, born Theodosia, known as a vampy, glam femme fatale of the silent film era.  I think Theda and Thora could both be contracted forms of Theodora.  They share a certain vintage shimmer.

If Thora seems tough for a small child to say, Tori might be a nickname option.  But only if there’s a need.

Overall, I suspect that Thora would make a solid choice for a name that fits in with Stella and Ava, but remains distinctively different, too.