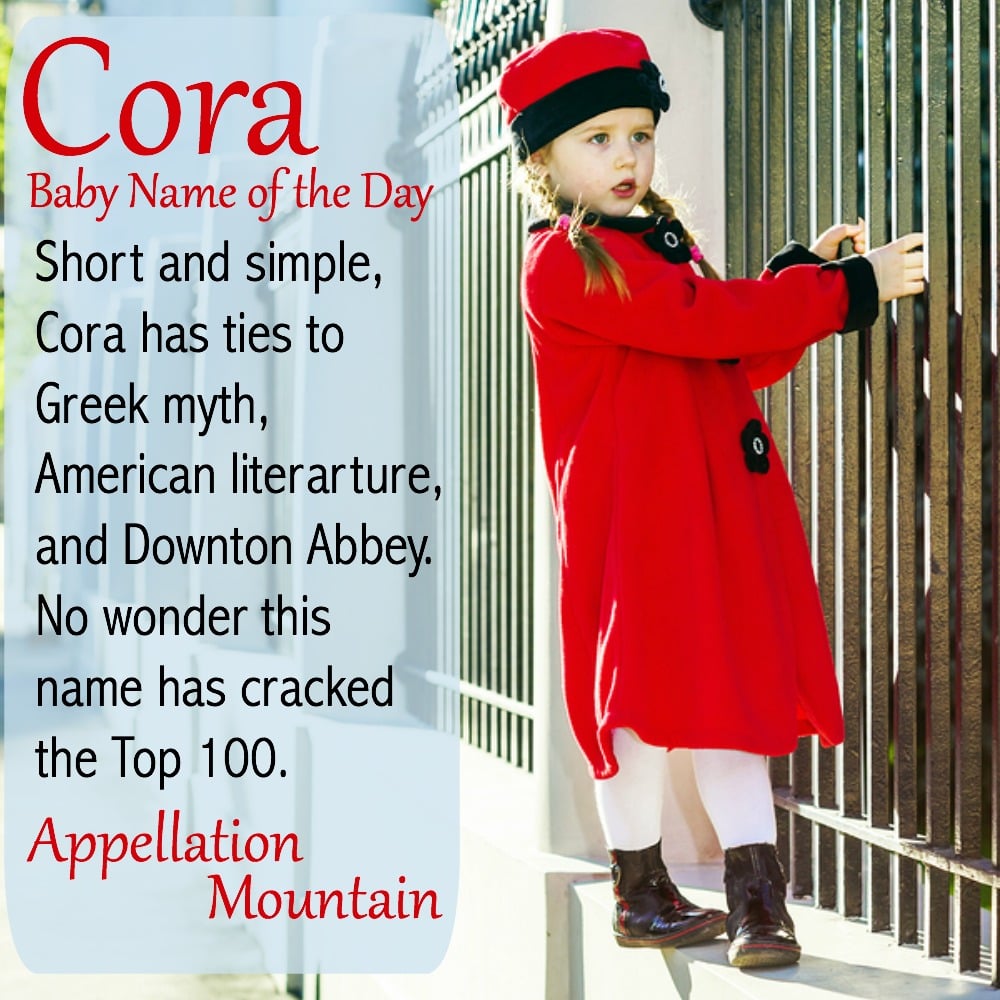 Cora has cracked the US Top 100, and shows no signs of slowing down.

Cor- appeals as a sound. We think of core strengths; the Latin word for heart, cor; as well as vintage names like Nora and Eleanor that share similar sounds.

It comes as no surprise, then, that a whole family of Cor- names is gaining in use. In addition to Cora, Coraline, Cordelia, and Kora all gained last year. Beyond the Top 1000, Coralie is rising, too.

But it’s the simple, vintage Cora that leads the way.

The name was first used in English by James Fenimore Cooper for an ill-fated character  in The Last of the Mohicans.

The novel was published in 1826, but set seventy-five years earlier.  The name fit Colonel Munro’s dark-haired daughter. While it isn’t widely known, Miss Munro is of mixed-race descent.  The Mohican warrior, Uncas, falls in love with her.  Adventure and romance follow, but neither Cora nor Uncas live happily ever after.

Cooper’s book became a success, and his heroine inspired plenty of parents. By the late nineteenth century, it became one of the most popular given names for girls born in the US, remaining in the Top 100 through 1912.

The author probably took inspiration from the Greek kore – maiden. Kore served as another name for Persephone.

Persephone’s tale of living in two worlds makes sense for Cooper’s tragic character. Persephone married Hades, the god charged with the ruling the underworld. Her heartbroken mother, the goddess Demeter, insisted that Persephone spend half the year in the world of the living, with her. When Persephone returned to mother, she brought spring. When she left to return to her husband, winter came.

In ancient days, Corinna was bestowed as a given name. There’s an ancient Greek poet called Corinna, and Ovid called a character in his Amores by the name.

Seventeenth century poet Robert Herrick brought the name into wider use in the English-speaking world with his poem Corinna going a-Maying.

The French form, Corinne, has enjoyed steady use in the US, but usually ranks #250 or high. At the moment, Corinne sits much higher, in the 700s.

Downton Abbey debuted in the UK in 2010, and followed a few months later in the US.

The smash hit period drama detailed the lives of the aristocratic Crawley family, as well as those who served in their grand house, for which the show is named.

Elizabeth McGovern played the kind-hearted, American-born Countess of Grantham. Born Cora Levinson, her fortune saved the Grantham estates when she married Robert, the Earl of Grantham.

Lady Grantham commands respect, but also love. She tends to do the right thing, regardless of class distinctions. She brings an optimism that seems particularly American. Those two characteristics lead her into frequent conflict with her blue-blooded mother-in-law, Violet.

Cora: By the Numbers

Cora peaked in the late nineteenth century, plummeted towards obscurity, but then enjoyed a modest revival beginning in the 1990s.

There’s every reason to believe Cora will climb farther. The name fits nicely with other two-syllable, ends-in-a vintage choices like Emma, Nora, and Clara.

For now, the name remains rarer than Emma. Though the days of this feeling like an undiscovered gem are over, Cora remains a strong, straightforward choice for a daughter.

Would you consider Cora, or do you prefer one of the other Cor-  names?