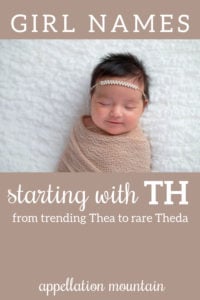 With Thea racing up the charts, could more girl names starting with Th be next?

It wasn’t always this way. One hundred years ago,  vintage charmers like Thelma, Theodora, and even Theola all ranked.

Then again, girl names starting with Th face a pronunciation challenge. Is Thalia’s TH like Theo or Thomas? Many names offer a clear answer. Others, like Thalia, require input from the bearer of the name.

This list is packed with rarities, girl names starting with Th that could be perfect for parents looking for a stand-out option.

A short name in the key of Leah and Mia, the rise of Thea follows logically from so many boys answering to the latest white hot classic, Theodore. If that wasn’t enough, superhero television series Arrow added to the name’s appeal.

Just as girls can be Charlie for Charlotte and Alex for Alexandra, feminine forms of Theodore have opened the door to Theo for girls.

If Theodore has returned to the US Top 100, and Thea is a fast-rising favorite, shouldn’t Theodora be right behind? Maybe. Except it has never ranked in the US. Dorothea, the name in reverse, peaked in the 1910s. And Dorothy ranked in the Top Ten from 1904 through 1939. So while Theodora sounds like a vintage favorite, it would actually be a new discovery for American parents. But with nicknames galore, it might be Theodora’s moment.

Unlike Theodora, Theodosia dipped a toe into the US Top 1000 back in the nineteenth century. And today? It’s a Hamilton baby name, thanks to Aaron Burr’s daughter, the subject of sweet lullaby “Dear Theodosia” in the Broadway blockbuster.

The nineteenth and early twentieth centuries were big on -ola endings. They were the -lyn or -lee of their day. If Leola and Viola were big, Theola fit right in. It’s a long-shot for a comeback today, but then again, Lola and Nola do sound quite stylish.

In tales of the Trojan War, Theone was part of the royal family of Troy, sister to Queen Hecuba.

This Greek name became 1980s chart-topper Tiffany, but the original holds some appeal.

There’s a third season character in Amazon Prime series The Man in the High Castle who answers to Thelma – but the show is set in midcentury America, so that sounds about right. From 1900 well into the 1930s, Thelma ranked in the Top 100. More -elma names from the same era include Scooby Doo’s Velma, Marge Simpson’s sister Selma, and as well as Zelma, Delma, and just plain Elma.

Mash together the first and final syllables of Theodora, and you’ll (sort of) arrive at Theda. Theodosia Bara made waves in the silent film era as Theda Bara.

File Thankful under Puritan virtue names. It may be familiar to some today because of The Witch of Blackbird Pond, a YA novel set in 1600s New England. Thankful is a minor character; it fits right in with other word names used in the story, like Mercy and Prudence.

While Teresa remains in the Top 1000, long-time favorite Theresa has fallen out of favor. That’s true even as Tessa becomes a twenty-first century favorite. French form Therese remains in use, likely thanks to an influential Catholic saint.

A feminine form of Thomas, Thomasina is rare in the US. A 1960s Disney live action movie gave the name to a long-lived cat in The Three Lives of Thomasina.

In Greek myth, Thalassa is a minor goddess of the sea. She’s described as mother to Aphrodite in some places, but most of the time? We just plain overlook Thalassa. It’s more subtle than Ocean, far rarer than Vanessa. A moon of Neptune is also called Thalassa.

A streamlined version of Theokleia, Thecla remains familiar thanks to a martyr-saint from the first century.

Another goddess name, Themis managed both law and custom. She’s considered the mother of more goddesses, the Hours and the Fates.

A sea nymph, we remember Thetis as the mother of Achilles.

A powerful literary choice, doomed lovers Thisbe and Pyramus suffered centuries before Shakespeare’s Romeo and Juliet. In our age of Penelope and Chloe, plus girl names starting with Th, Thisbe seems more wearable than ever.

An ancient region of Greece, Thessaly seems like an unusual – but wearable – place name possibility.

A name well used in Greek myth, Thalia was one of the muses. She presided over comedy.

Samantha mentioned this name, from a Libba Bray novel. If you know your Greek alphabet, you’ll recognize Theta as the eighth letter.

Romy brought up Thera, inspired by an ancient name for the Greek island of Santorini.

A great suggestion from Leah, Thistle could be a great Scottish heritage pick. Or it might simply fit with so many unconventional nature names.

A name from the ancient world, it appears in the annals of Alexander the Great, as well as a fourth century saint. It’s been popular in France recently, where it’s pronounced ty ees.

Thandie Newton pronounces her name like Candy with a T; the ‘h’ is silent. It’s an appealing sound that fits with vintage picks like

We all know that Thor reigns as the Norse god of thunder. (Thank you to Marvel.) But feminine form Thora feels far less familiar. And yet, Thor might be a lot to live up to. Thora, on the other hand, fits right in with favorites like Cora, Nora, and Aurora.

Thema means queen in Akan, a language spoken primarily in Ghana and the Ivory Coast.

What are your favorite girl names starting with Th? 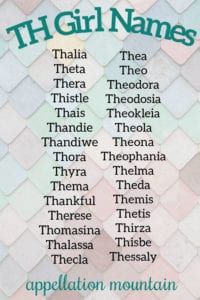