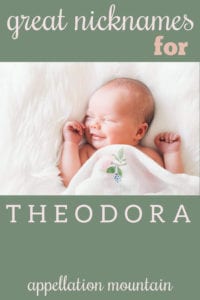 Even though it recently entered the US Top 1000, Theodora combines lots of appealing qualities. It’s as classic as Katherine, as nickname-rich as Margaret, and yet still nicely underused.

Some of these choices feel easy and obvious. Others might be more of a stretch. But if you’d like to combine long and lovely Theodora with something simpler for everyday use, one of these should fit.

Just as Theodore naturally shortens to Teddy and Ted, so does Theodora. After all, Alexandra, Charlotte, and Samantha all share default nicknames with their masculine counterparts.

Thea recently blazed back into the US Top 1000, bounding into the Top 300 in 2019. Part-Theo, and part-Leah and Mia, Thea stands alone. But it also works beautifully as a Theodora short form.

Of course, if boys and girls can share Teddy, why not Theo? Theodosia Burr Alston – of “Dear Theodosia” fame from the musical Hamilton – answered to Theo.

If Dorothy shortens to Dolly, can’t Theodora, too? It feels slightly less connected, and yet, Dorothy is simply a medieval English form of Dorothea – the same elements as Theodora, reversed. Molly remains a powerfully popular pick for girls in the US, so Dolly should wear every bit as well.

Chop off the second half of this long, compound name and you’ll have Thea. But drop the first half, and it’s Dora. If not for the cheerful explorer of Nickelodeon fame, Dora might be following Nora and Cora up the charts. Instead, it’s been ages since Dora cracked the Top 1000.

There’s something elegant about reducing long, lovely Theodora to just Dot. Like Dolly, Dot traditionally attaches to Dorothy. But there’s no reason it doesn’t work for Theodora, too. Dot feels spare and sparky, an unexpected choice that charms.

Contracted nicknames have a long history. Thora might not be obvious, but it’s a natural.

TORI and TORIE and TORY

It’s short for Victoria, but the T-or sound is very much present in this name, too.

What are your favorite Theodora nicknames? Any I’ve missed? 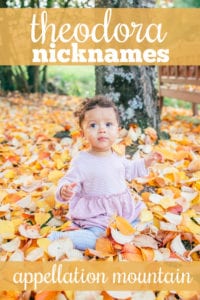 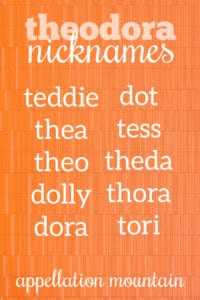