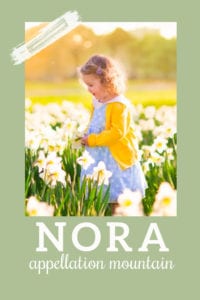 The baby name Nora makes for a smart classic, a traditional choice perfect for a modern girl.

Not only is Nora timeless, but it’s culture-spanning, too.

That’s thanks to two distinct, but complementary, origins.

First: the baby name Nora evolved as a short form of Eleanor. While Eleanor’s origins are fascinating – it comes from a phrase meaning “the other Aenor,” to distinguish a mother from a daughter – we tend to mix it up with Helen. Some sites borrow Helen’s meaning – torch or shining – for Eleanor, too.

Of course, other girl name end with -nora and -ora, including Honora.

But then there’s the Arabic Noor, which does mean light. In some cases, it’s written Nura, Noura, or even Nora.

Between the widespread use of Eleanor names across Europe and the English- and Spanish-speaking worlds, and the many countries using Arabic names, that’s quite a reach.

One of the places the name surfaces: Albanian folklore.

It’s said that Nora of Kelmendi was a beautiful young woman – and also a warrior. She caught the eye of an Ottoman pasha. The Ottomans had ruled much of the region beginning in the 1400s. By the time her story takes place, in the seventeeneth century, generations had been at war.

While the story varies, Nora ultimately kills the pasha through a mix of cunning and her fighting skills.

In 1879, Henrik Ibsen’s A Doll’s House gave the world a very controversial Nora.

Spoiler alert: she leaves her husband and children to live an independent life at the end. It was wildly controversial in its day – so much so that some early performances added a more ambiguous ending.

It’s said that Ibsen based the character Nora on a real-life woman he knew named Laura.

Ibsen was Danish, and Nora has a long history of use in Scandinavia. It comes from Eleonora, but also nods to a masculine name meaning north. According to Nordic Names, the baby name Nora enjoyed quite a bit of use following A Doll’s House, becoming popular around the turn of the century in Sweden, Norway, and Denmark.

Indeed, the baby name Nora must’ve felt quite stylish in the US at the same time. It ranked in the US Top 100 in 1880, the first year for which the popularity list is reported.

Along the way, we met a significant number of Noras.

Nick and Nora leapt from the pages of 1934’s The Thin Man to films, radio, television, and even a Broadway musical.  Plenty of other fictional couples were modeled after the duo, with their playful banter and mutual respect. The stories continue to inspire new adaptations into recent years.

And there’s something about saying Nick and Nora together – just ask the pajama company, or the Michael Cera-Kat Dennings 2008 flick, Nick and Norah’s Infinite Playlist.

The author James Joyce’s wife was named Nora. So were a handful of early twentieth century actors and other figures. Charles Darwin’s granddaughter was Nora, later Lady Barlow. She studied botany at Cambridge and continued her grandfather’s work.

Another possibility is Norah Jones, the Grammy-winning singer-songwriter. Jones’ 2002 album Come Away With Me earned five Grammys, including Album of the Year.

Jones also highlights the name’s culture-crossing appeal. The daughter of Indian musician Ravi Shankar and American concert producer Sue Jones, the name is at home in both cultures.

In the year 2000, the baby name Nora ranked a chilly #501. It represented an all-time low on the US popularity charts.

And then, just as quickly, parents rediscovered the name.

That’s the year that the biopic Nora debuted, telling the story of James Joyce and his wife, Nora Barnacle. While it was an indie Irish film with minimal reach, perhaps it lent the baby name Nora some literary sheen.

Nora – and the spelling Norah – also fit nicely with favorites from the late 1990s and early 2000s, like Sarah and Emma.

And then along came Norah Jones, raising the name’s profile even further.

It’s an irresistible combination – a name at once classic and culture-spanning, nickname-proof but distinctive sounding, too.

There’s something about Nora that feels classic and capable. It’s a smart choice, one that embodies plenty of strength and creativity, but also offers roots and connection to traditional names at the same time.

No surprise parents have embraced this brief, appealing name.

What do you think of the baby name Nora? 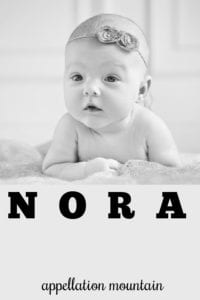