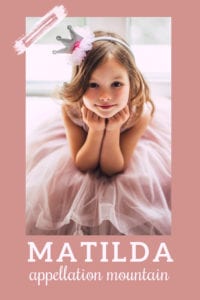 The baby name Matilda blends traditional roots with bohemian style. It’s less classic than Katherine, not as daring as Lilou.

Born to a noble family, the future Saint Matilda became a queen by marriage. Their son, Otto, would become the first Holy Roman Emperor after a break of several decades.

Several other well-born Matildas wore the name, including the wife of William the Conqueror. Born Matilda of Flanders, the future queen brought her name to England with the Norman invasion.

A list of European royals and nobles answered to the name, and various forms are heard in other languages.

It changed quite a bit in English, too, becoming Maud and Maude in everyday use.

So how did the baby name Matilda travel from Europe to become the unofficial national anthem of Australia?

Packed with deliciously strange slang and memorable lyrics, the folk song “Waltzing Matilda” isn’t actually about a girl. Instead, to “waltz matilda” is to travel with all of your possessions on your back.

Poet Banjo Patterson wrote the lyrics in 1895, rich with Australian slang and language from the era: billabong (a river bend), billy (can for boiling water), and jumbuck (sheep).

If not Australia, this name might make you think of Roald Dahl’s Matilda Wormwood.

Published in 1988, Matilda is the story of a whip-smart and very kind five year old, born to neglectful parents. She starts out as a prankster, using her abilities to get the best of her obnoxious older brother and uncaring parents. But ultimately she lives happily ever after. A 1996 movie adaptation remains in rotation, and a Tony Award-winning musical debuted on Broadway in 2010.

It’s an enduring story, one that makes Matilda an appealing choice for a daughter’s name.

While we’re talking about fictional girls by the name, you might also recognize Mafalda. The Portuguese and Italian version of Matilda, Mafalda is the star of an Argentine comic strip from the 1960s, one that led to books and an animated series. She’s a little like Charlie Brown – an enduring cultural touchstone.

What does it mean for the baby name Matilda’s popularity?

From 1880, the first year for which US data is available, into the 1910s, the name ranked in the US Top 250. It was more popular in the late nineteenth century, and waned as the twentieth century began.

By 1965, the baby name Matilda exited the rankings entirely.

Then actors Michelle Williams and Heath Ledger welcomed daughter Matilda in 2005. The trend reversed, and the name slowly started to gain in use.

There’s something about the baby name Matilda that feels Bohemian chic. It’s just a little bit different, a name that sounds like few others.

Then again, the baby name Matilda feels almost traditional, too. It boasts history galore – saints and queens and historical figures, too. The name is in use across the world.

And Matilda almost feels like an alternative to the long-time favorite Madeline – choose your spelling. After all, Mattie could easily hang with all of those little Maddies.

Overall, it’s easy to imagine the baby name Matilda appealing to parents today. It’s sweetly old-fashioned, but with plenty of sparky, modern spirit, too. And much as Matilda fits right in with favorites like Sophia and Evelyn, it’s distinctive and different, too.

What do you think of the baby name Matilda? 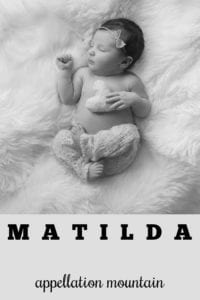