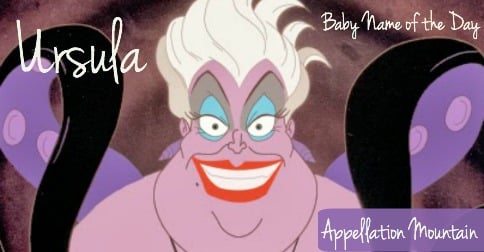 This post was originally published on March 15, 2009. It was substantially revised and re-posted on October 26, 2015 as part of Villains Week.

It could be a clunky-cool choice for a daughter, but instead, it’s a Disney villain name.

Thanks to Natalie for suggesting Ursula as our Baby Name of the Day.

Disney’s The Little Mermaid propelled the name Ariel to new heights in 1989.

But it did no favors for Ursula.

The traditional version of the fairytale includes a sea witch, who uses magic to turn the mermaid’s fish tail into legs. Disney named her Urusla, and made her a purple-skinned, white-haired, tentacle-waving menace. Technically, she’s a cecaelia, a woman-octopus hybrid.

In the fairytale, the witch casts her spell and retreats to the background. But in the movie, she’s a major bad-guy with a thirst for power.

Ursula: Beyond the Sea 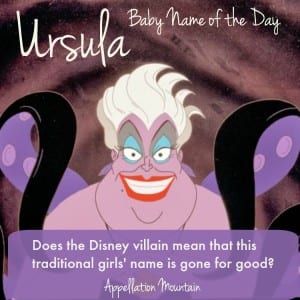 But there was a sharp drop in the name’s use after The Little Mermaid debuted. In 1989, Americans welcomed a mere 105 Ursulas. By 2014, that number was just 23.

Despite the name’s association with a power-hungry half-octopus, it actually comes from the Latin ursa – bear – think Ursa Major and Ursa Minor.

The name was made famous by a legendary saint. The saint’s story begins in England, sometime around the fourth century. The story goes like this: Ursula was a Christian princess, set to marry a pagan ruler overseas. When her ship landed, the devout princess announced that she wished to make a pilgrimage to Rome prior to her marriage.

Ursula made it as afar as Cologne, where she met her death at the hands of the Huns.

Here’s where things turn unbelievable. It’s said that Ursula sailed with 11,000 handmaidens, and the Huns dispatched all 11,001 of them. Their bones are still on display in Cologne’s Basilica of St. Ursula.

The bones are real, but it appears that Ursula’s party was far smaller – perhaps eleven handmaidens. An inscription reading XI. M. V. – eleven martyred virgins – may have been misinterpreted as eleven thousand. It’s a heck of a medieval typo! The story became quite popular in the Middle Ages, so while the bones likely come from many of the deceased over the many years, the story of 11,001 martyrs remained popular.

There is a historic Saint Ursula, born Julia in 1865, and the founder of a religious congregation.

Ursula: Beyond the Saint

Honey Ryder – the first Bond girl in 1962’s Dr. No – was played by Swiss-born actress Ursula Andress. Ursula saw a brief resurgence in the 1960s thanks to the Swiss starlet.

Disney’s sea witch and Friends‘ psychotic twin came at a moment when no one was naming their daughter Ursula. It seems unlikely that the name will make a comeback.

And yet, if you’re all about clunky-cool, and frustrated that Olive and Margot are gaining in popularity, Ursula remains beautifully obscure. (Elea calls them funky-clunky!)

It’s an unconventional choice, but one with fascinating roots and an interesting style.

What do you think of Ursula? Is this name gone for good?