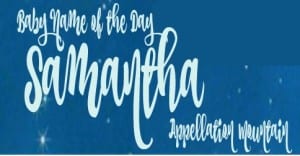 This post was originally published on November 10, 2009. It was substantially revised and re-posted on December 14, 2014.

This has been a steady favorite since Elizabeth Montgomery twitched her nose on television half a century back.

Thanks to Kelly for suggesting Samantha as our Baby Name of the Day.

Samantha tends to appeal to parents who like Alexandra and Isabella. Classic, elaborate names with long histories of use, worn by saints and queens and other notables dotting the history books.

And yet this name isn’t quite like the others.

It’s a feminine form of the Old Testament Samuel, from the Hebrew for “God has heard.” The -antha likely comes from the Greek word for flower, which also influenced the name Anthony.

Samuel has a long history of use, but there wasn’t a common feminine form for years.

Folk music’s Samantha Baumgartner was born in 1878 in North Carolina, and became famous as a fiddler – perhaps the first notable use of the name. By the 1880s, the name charted in the 500s in the US. By the 1900s, the go-to girl’s version of Samuel appears to have been Sammie, a sister for Bobbie and Billie.

1939’s The Philadelphia Story gave us a heroine called Tracy Samantha Lord. You wouldn’t think a middle name could matter, but the play became the musical movie High Society in 1956. Grace Kelly played the lead, and one of the songs? “I Love You Samantha.” There was an uptick in the name’s use, but it didn’t last. 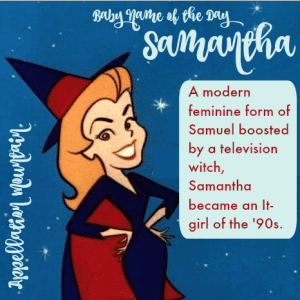 Then came 1964’s Bewitched. The series ran until 1972, and can still be seen in re-runs all over the planet.

In brief: there are witches, but keep a low profile while amongst mortals. Until one falls for an ordinary Joe called Darrin, and decides to quit magic to marry her true love.

Except inevitably the beautiful witch has to rely on a a combination of quick-thinking and spell-casting to save the day.

The writers chose unusual, witch-y names for all of their characters: Endora, Serena, Enchantra, Hagatha, Esmeralda, and, of course, the witch who started it all, Samantha.

American parents noticed. Bewitched debuted in 1964. Just look at the popularity of Samantha.

At the same time, the UK’s Top of the Pops featured Samantha Juste, the “disc girl” who put the needle down on the record. (Remember those?) Juste was born Sandra. This name sounded must have sounded terribly exotic in the 1960s, everywhere in the English-speaking world. It wasn’t all witchcraft. Molly Ringwald answered to the name in 1984’s Sixteen Candles. More characters ranged from Tony Danza’s tomboy daughter on Who’s the Boss to Kim Catrall’s confident, ambitious New Yorker on Sex in the City. The name was heard on soap operas. An American Girl doll with the name was introduced in 1986.

But in more recent years, just Sam has gained favor for girls (Tiger Woods and Denise Richards both have daughters named just Sam.) The exotic Samara, boosted by a horror film, has also enjoyed success.

In recent years, celebs have flocked to simple Sam for their daughters. (Think Tiger Woods and Denise Richards.) Exotic variants Samiah, Samira and Samara are also options for parents seeking a fresh take on Samantha.

While there’s nothing unexpected about Samantha, she still wears well today – even if she can’t quite claim to be a classic.

What do you think of Samantha? Does it seem like a classic? Or is this name too dated to consider in 2016?