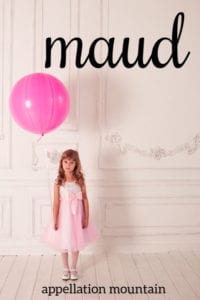 Straightforward and strong Maud peaked in the late nineteenth century. Could that make it overdue for a comeback?

Matilda comes from the Germanic Mathildis – maht, or might, and hild, or battle. That’s a fierce and powerful name.

In the tenth century, Mathilda of Ringelheim became a queen, and later a saint.

More royals followed. Matilda of Flanders descended from King Alfred the Great of England. She married William the Conqueror, and returned to the land of her great-great-great-great-grandmother to reign as queen.

No surprise that Matilda became one of the many Norman names adopted in England.

But, like many a Norman name, it evolved in England.

Mahald or Mahaut served as informal versions of the name. Shorten either one just a little, and you’ll eventually arrive at Maud.

For centuries, the two names were interchangeable.

William’s last surviving granddaughter was called Maude. While still a child, she married the future Holy Roman Emperor. More titles followed, including Queen of Italy, but she was known as Empress Maude. After a succession crisis in England, her son would claim the throne as King Henry II.

The pattern repeats for many women over the centuries, with both names used depending on the circumstances.

The name might’ve faded into obscurity with Godelieve and Griselda and so many other medieval choices.

Then came Alfred, Lord Tennyson. He penned an 1885 poem called “Maud,” a romantic tale ending in heartbreak. It’s the kind of thing that can make a name appeal to parents. He wasn’t the first; Christina Rossetti wrote an 1859 poem named “Maude Clare,” but it’s not one of her best known works.

Though it appears the name was in the midst of a revival when Tennyson embraced the name. Maud peaked at #68 in 1883 in the US, while Maude reached as high as #20 in 1882.

One more literary note: 1874-born Lucy Maud Montgomery, author of Anne of Green Gables and many more beloved works, was known by her middle name.

The final ‘e’ feels consistent with feminine names from Claire to Brooke to Sloane, so perhaps that explains the success of Maude over Maud.

Pop culture has given us more of the -e ending ones, too, at least in the twentieth century:

A handful of stylish parents have embraced the name for daughters. Gabrielle Blair, the blogger behind Design Mom, has a Maude. Director Judd Apatow and actor Leslie Mann are also parents to a Maude, who started out acting in her father’s films and has graduated to a career of her own.

As of 2018, just five girls were named Maud, plus an additional 25 spelled with the ‘e’. That marks the most Maudes born since the 1960s.

That’s still far too few births to call it a comeback, but it might signal an opportunity. If you’re all about undiscovered vintage gems, maybe this is the name for you.

Do you think Maud is due for a comeback?  Do you prefer Maud or Maude – or maybe Matilda? 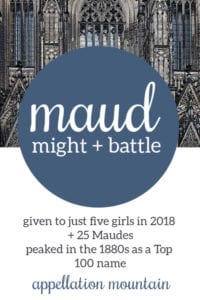