All about the wild blue yonder?  This name could be for you.

Thanks to Photoquilty and Jill for suggesting Jett as our Baby Name of the Day.

This sounds like a twenty-first century name, and indeed, Jett first cracked the US Top 1000 back in 1999.

But you’ll find a steady trickle of boys given the name starting in the 1940s.  That’s probably because Jett has history as a surname – though the story isn’t a happy one.  In French, abandoned children were traditionally given the surname Jetté, from the verb jeter – to throw.

Jett Thomas, of Georgia, fought in the War of 1812 and later served in Georgia House of Representatives.  Thomas was born in 1776, so there’s plenty of pre-1999 history for this name.

Jett’s profile was on the rise throughout the twentieth century, thanks to:

The jet engine was developed in the 1920s, entered in military use during World War II, and by the 1950s, carried passengers. It was the Jet Age, complete with a Jet Set.

John Travolta’s late son Jett was named after dad’s love of aviation.  Plenty of high profile parents have embraced the name, including:

I’ve also heard Jett suggested as nickname for Juliette, and Jet is traditionally associated with Dutch feminine names ending in -ette, too.

Drop one ‘t’ and Jet becomes a gemstone, formed when wood decays under pressure.  It’s dark in color – jet black.  Queen Victoria favored jet while in mourning, and strands of beads made from the material were all the rage during the Roaring Twenties. 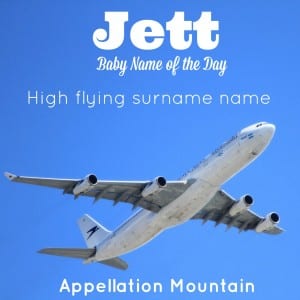 Heading into 2013, Jett climbed to #324.  For a name that was nearly unknown fifteen years ago, that’s quite the rise.

Jett just plain hits all the marks – a single-syllable name that feels distinctly different than Aiden and Noah.  It’s a modern choice, but one with enough history to feel grounded – while remaining in the bright blue sky of possibility.

What do you think of Jett?  Is this a great modern pick for a son – or maybe a little over-the-top?