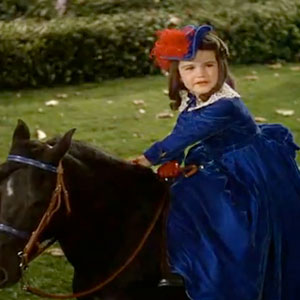 She’s a word name from way back, a pretty appellation boosted by a Hollywood classic.

Thanks to Chandler for suggesting Bonnie as our Baby Name of the Day.

Bonnie has been a word far longer than it’s been a given name.  Shakespeare used the phrase blithe and bonny in Much Ado About Nothing.  It probably comes from the Latin bonus – which originally meant good or well.  The Old French was bon, with bonne as the feminine form.  From bonne, it’s just a hop, skip, and a jump to bonny and bonnie in English.

The Scottish usage of bonnie was just a little different – it meant pretty, just like bonita means pretty in Spanish.

She probably started out as an affectionate nickname.  That’s the case with the most famous fictional Bonnie – the daughter of Rhett and Scarlett in Gone With the Wind, Eugenie Victoria, known to the world as Bonnie Blue Butler.

Scarlett chose the regal names for her little girl.  It was dad that nicknamed her, after a flag used by the Confederate army during the Civil War.  The flag inspired the popular song “The Bonnie Blue Flag.”

There are a handful of women named Bonnie born in the years immediately following the Civil War, so perhaps Margaret Mitchell wasn’t just inventing the fanciful nickname.

In any case, the name was on the upswing before Mitchell’s smash hit 1936 novel and the equally successful 1939 film.

Then there’s Bonnie and Clyde.

Miss Parker was a real person, and she really went on a crime spree with her boyfriend Clyde during the Great Depression.  Pop culture has given her a sort of gun moll persona, and the pair died in a gunfight with law enforcement.  It’s not really clear if she was a cold-blooded killer or just along for the ride.  What we know is that their life on the run wasn’t nearly as glamorous as we remember, and the gang’s acts were horrific.

Despite that, she does lend something to the name – a balance to the sweetness, a sense of edginess.

Men have been Bonnie, too, but as a nickname.  Bonnie Prince Charlie claimed the thrones of England, Scotland, and Ireland in the eighteenth century.  His grandfather had been deposed in favor of the Protestant rulers William and Mary in 1688.  He tried to reclaim the throne several times, but was consistently thwarted.

Today Bonnie is sweetly retro.  Her heyday was the 1940s, but she feels even more vintage, thanks to the old nursery rhyme.  Sunday’s child is “bonny and blithe and good and gay.”  There’s also Shakespeare’s Sigh No More from Much Ado About Nothing, which also uses the phrase blithe and bonny.  And I’m humming “My Bonnie Lies Over the Ocean” as I write this.

Bonnie Bennett on The Vampire Diaries is one modern bearer of the name, but overall Bonnie feels like a retro name.

If girls can answer to Sadie and Daisy, why not Bonnie?