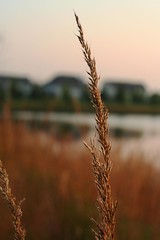 Praise and Promise were names given to dozens of girls in 2011.  But this lovely nature name is impossibly rare.

Thanks to Deanna for suggesting Prairie as our Baby Name of the Day.

Prairie sounds like classic girls’ names like Mary and Carrie, but her spelling is slightly more elaborate.  She comes from the Latin pratum, which became praerie and then prairie in French.  The word was known in English once upon a time, but we discarded it until the late eighteenth century, when we needed new words to describe the vast American wilderness.

In some ways, this makes Prairie a patriotic name, too.  Post-Revolution, the new nation started aggressively expanding west.  Daniel Boone was blazing trails, and we were about to seal the Louisiana Purchase in a few more years.

Strictly speaking, there are similar environments all over the world.  The Argentine Pampas are prairies, and so are the steppes of Eurasia.  But the word is usually reserved for the American Midwest – think of Kansas and Missouri, Wisconsin and Oklahoma.  There’s also an architectural style called Prairie School, used to describe the type of buildings that evolved in the region.  Up until then, quite a bit of our architecture was based on European design aesthetics.  By the late nineteenth century, we were looking for something specific to our habitat.

Prairie features in place names and animal names, but the most famous person named Prairie is fictional – and not completely human.  She’s a seven year old Muppet called Prairie Dawn.  She’s not one of the most famous Muppets, but she has been around for ages.  Perhaps the hot pink puppet is the reason Prairie really does seem more common than she is.

Despite all of these wholesome associations, Prairie feels more hippie chic.  Other than the Muppet, the only figure to wear the name was, indeed, the fictional teenaged daughter of an aging hippie in Thomas Pynchon’s 1990 novel Vineland.  A smattering of real people have answered to the name – mostly women, but apparently a man or two, too.  Some of them are Native American, but others are clearly not.

What does this mean for Prairie circa 2012?  With nature names at an all-time high, there’s really no barrier to using Prairie.  She sounds like an established name, too.  So if you’re fretting that Meadow is too popular and Autumn too obvious, why not Prairie?