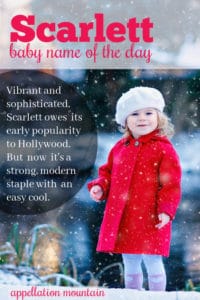 Scarlett makes for a vibrant color name with plenty of Hollywood glam.

Thanks to Ivy for suggesting our Baby Name of the Day.

We all know the beautiful, headstrong Scarlett O’Hara as the central figure in Gone With the Wind, but Mitchell nearly named her Pansy instead.

Mitchell had a last minute flash of inspiration, and you know the rest.

The 1936 novel put the name on the map. It debuts in the US Social Security data the following year.

A very few people did have the name before the bestseller, almost certainly thanks to the surname.

Turns out that it was an occupational surname first, given to dyers of woolen cloth, or possibly those who sold it.

Way back then, scarlet cloth came in colors besides red – though red was among the most popular. The word probably comes from the Persian saqirlat – fine cloth, via the Late Latin sigillatus – elaborately decorated clothes. The word became scarlata in Late Latin, escarlate in Old French and Spanish, and scarlatto in Italian.

You might find some magic in the word. It shares roots with sigil – a magical symbol – but also signal and sign.

As colors go, scarlet reads bold, even dangerous or forbidden.

It appears in the Book of Revelation. Sir Arthur Conan Doyle writes of “the scarlet thread of murder” in a Sherlock Holmes case circa 1887. And, of course, Nathaniel Hawthorne’s 1850 novel The Scarlet Letter makes the color synonymous with sin. Or maybe just disease, as in scarlet fever, so called because of the distinctive red rash that characterizes it.

Then again, The Scarlet Pimpernel rescued French aristocrats from the guillotine. That was 1905, so the name’s reputation wasn’t all bad.

Today, the color remains vivid and dramatic, but not quite so scandalous.

It fell in use, but appeared from 1962 to 1963. That’s likely due to the book’s twenty-fifth anniversary in 1961, and the publicity surrounding the event.

But a few other uses could get credit, including a Canadian soap opera and a character from 1961 Billy Wilder comedy One, Two, Three featuring an American exec tasked with keeping his boss’ Southern belle daughter out of trouble in Europe. (He fails, but all ends happily.)

In 1991, for the book’s fiftieth anniversary, Margaret Mitchell’s estate commissioned a long-awaited sequel. Novelist Alexandra Ripley penned it. Critics savaged the story, but it still topped bestseller lists for weeks, and a can’t-miss miniseries quickly followed.

A handful of other uses bolstered the name, like Hugh Grant’s quirky red-headed roommate in Four Weddings and a Funeral.

Color, nature, and noun names were rising at time, too. By the mid-1990s, Ruby was climbing; not long after, Violet would return to the US Top 1000.

But one woman deserves most of the credit: Scarlett Johnansson. Her first Independent Spirit award nomination was for 1996’s Manny & Lo. In 2003, Lost in Translation transformed her into a major celebrity.

Despite all that popularity, I think this name still feels edgy and cool. Maybe it’s the color that does it. Perhaps it’s the unexpected sound. Or maybe it’s Hollywood – the combined weight of ties to a legendary fictional character and a major star of our time, too.

Either way, this remains a name that feels bold and confident, a modern choice with style to spare.

Originally published on June 29, 2011, this post was revised substantially and re-published on April 10, 2019.