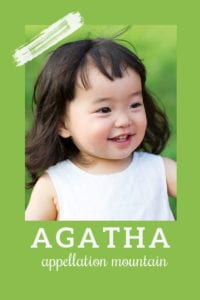 Back in the 200s, the well-born Agatha converted to Christianity and planned a celibate life. Instead, a frustrated suitor had her arrested and tortured when she wouldn’t change her plans – or deny her faith, even when it resulted in her death.

She’s been venerated as a saint ever. In fact, Agatha was among the most revered of saints in the Middle Ages.

That means the baby name Agatha occurs in nearly every European language, though many of them drop the ‘th’ for a ‘t’ – Agata.

Since Saint Agatha was popular during the Middle Ages, the baby name Agatha likely followed. The Dictionary of Medieval Names from European Sources confirms this – but it’s not terribly common, at least not in the eleventh century.

Because the 1000s is where we meet one endlessly intriguing medieval Agatha.

Back in 1016, Canute of Denmark routed the armies of King Edward II and took over England. Edward’s young son, also named Edward, was sent off to be murdered but instead ended up living in Kiev and Hungary. Known as Edward the Exile, he eventually became the official heir to the English throne – but met his end before he could be crowned.

Somewhere along the way, he married Agatha. Historians can’t confirm her parents or her place of birth. But her relatively unusual name suggests that she might’ve been from Hungary, Kiev, Bulgaria, or a German kingdom. She named her daughters Margaret and Cristina, also unusual names for England at that time.

It’s also said that William the Conqueror named one of his many children Agatha. She would’ve been born around the 1057 death of Edward the Exile, but before the Norman invasion in 1066. The princess died young, and few mentions of her survive.

In later centuries, a handful of high born women answer to the name. There’s a Russian royal in the thirteenth century, and a German princess born in the late 1800s.

Fast-forward to the year 1880, when the US first records popularity data for given names.

But this name has been in serious decline ever since. Since the 1930s, there’s only a single year when more than 100 baby Agathas were born.

And yet, it marks a plateau, too. Because the name has never really dropped off the radar, either. Even at the name’s lowest usage point, in the mid-90s, just over a dozen girls were still given the name every year.

Unlike many relatively uncommon names, everyone recognizes the baby name Agatha.

Born in 1890, her first published novel came in 1920. The Mysterious Affair at Styles introduced the world to detective Hercule Poirot, and launched a career that is still inspiring adaptations and imitators a century later.

Her life even included a mystery: in 1926, with her marriage on the rocks, Christie briefly disappeared. It made headlines around the world. No complete explanation has ever been given – by Christie or her biographers – for the eleven missing days. But we continue to wonder, in movies and books, including the recent bestseller The Mystery of Mrs. Christie.

Overall, though, we simply remember Agatha Christie as the best-selling fiction writer of all-time, a master of the mystery. And Then There Were None remains one of the highest-selling books of all time, and The Mousetrap holds the record for longest initial run of any play.

The most famous real-life Agatha makes a worthy namesake, but the fictional Agathas? They are a challenging lot.

On a brighter note, Poldark’s Aunt Agatha is fierce and insightful character.

And Rainbow Rowell’s novel Carry On gives us a young and beautiful Agatha – though she’s a witch at a Hogwarts-like academy. Which brings us to the most famous Agatha of 2021.

WandaVision fans have another association for the name: Agatha Harkness.

If you know your Marvel Universe, you might see Agatha as a benevolent mentor to the Scarlet Witch. She’s even heroic at times. Her bio makes her one of the witches tried at Salem way back in the 1600s. She’s been casting spells ever since.

But WandaVision gives us Agatha Harkness as a villain, so that’s possibly a strike against the name. Though the series is still very new … and anything can happen in the MCU.

The result is a name that feels a little off-limits. Some likely put the baby name Agatha in style limbo, along with Mildred and Gertrude.

But at least one quality sets Agatha apart: Aggie. If we’ve embraced Abby and Maggie for our daughters, then Aggie tracks.

If we’ve revived Hazel and Edith and Flora, is Agatha really off-limits? It could be the perfect familiar rarity to give to a daughter now.

Do you think the baby name Agatha is ready for revival? 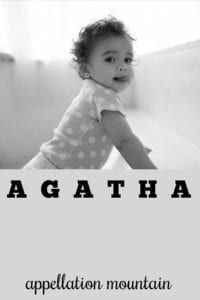