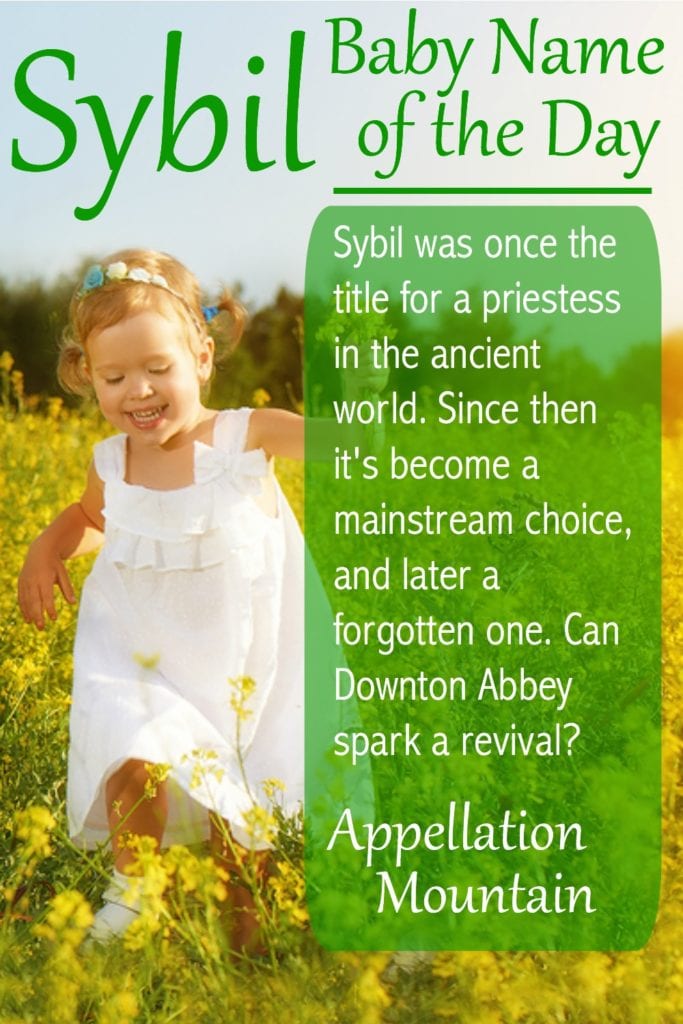 Looking for a stylish – but rare – name for a daughter? Consider Sybil.

Once upon a time, Sybil wasn’t a given name at all.

It was a title.

In the ancient world, it referred to a prophetess. While their personal identities remain largely unknown, their cryptic pronouncements influenced the course of history.

Certain shrines were especially well-regarded. At Delphi – arguably the most famous site – the head priestess was known as Pythia, and channeled the predictions of Apollo. The priestess at Cumae might have predicted the birth of Jesus. Plato, Virgil, and Heraclitus all recorded tales of their prophecies.

In the Middle Ages, Sybilla became the preferred form. The Dictionary of Medieval Names from European Sources lists dozens of variations, including Sibilia, Sibella, and Sibly. Surname Sibley evolved, too.

How could a pagan prophetess inspire medieval namers? Because at least one revelation involved the birth of Christ, the name became acceptable in a Christian context.

By the Renaissance, the ancient oracles had become a popular theme in art. Michelangelo’s Sistine Chapel includes five.

The Reformation cooled enthusiasm for this name.

The name was rediscovered in the nineteenth century. Benjamin Disraeli called his 1845 novel Sybil, or The Two Nations.

In 1920, when the name reached peak popularity, the y-first spelling ranked in the Top 300, while Sibyl languished 200 or more places behind.

1973’s Sybil was said to be the true story of a woman with multiple personality disorder. The bestseller became a made-for-TV movie in 1976.

Sybil served as a pseudonym for the patient, Shirley.

Cybill Shepherd – named for grandfather Cy and father Bill – played Jacy in The Last Picture Show in 1971, and later dominated the 1980s as one-half of the duo in Moonlighting.

The combination led to a small uptick in the number of girls given the name, as well as the debut of Cybil and Cybill. But by the mid-1990s, it teetered on the edge of obscurity.

Today’s parents will see Sybil in a very different light.

But it’s Downton Abbey that remade the name. The BBC breakout hit centered on the Crawley family, including idealistic youngest daughter Sybil. She’s a suffragette and a nurse during the war. She elopes with the chauffeur, only to die during childbirth. Their daughter – usually called Sibby – is named after her mother.

Downton Abbey has done wonders for Cora, so it comes as no surprise that the name is trending. 90 girls were named Sybil in 2015, the highest number since 1980.

That’s still far outside of the current US Top 1000, which makes this a great choice for parents seeking something just as simple as Alice or Evelyn, as ancient as Penelope, but far less expected than any of the current favorites.

Do you think Sybil will return to the US Top 1000?

This post was originally published on September 18, 2008. It was substantially revised and reposted on August 25, 2016.