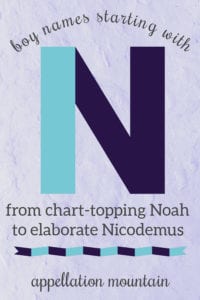 While some boy names starting with N can be heard on any playground, others are instantly familiar – but still fairly uncommon. After all, even Nasir and Nehemiah rank in the ten most popular N names. They’re not exactly Ethan and James.

In terms of popularity, N was the twelfth most popular letter for boy names in 2019. That puts it well behind J, A, L, and even M … but comfortably ahead of less common initials, like P and Z.

But there are still countless handsome and wearable boy names starting with N. Read on for some of the nicest!

He built the ark in the Old Testament. Millennia later, this Biblical boy name topped the charts in the US.

Another Old Testament name, Nathan feels less Biblical and more like a modern traditional choice for a son. In the age of Aiden, it’s a stands-out/fits-in kind of choice.

A friendly Irish surname name, it means famous. Which is fitting, since baseball legend Nolan Ryan put in on parents’ radar.

With a great meaning – victory of the people – and cool nickname Nick, Nicholas has been a Top 100 staple in the US since 1972.

Yet another Biblical boy name, Nathaniel feels more like a classic. Maybe that’s thanks to literary giant Nathaniel Hawthorne. It’s a brother for Theodore, an alternative to Alexander.

The French form of Nicholas, nearly as popular as Nicholas.

A cool Nicholas nickname, with a certain amount of European flair.

A handsome Arabic name with an appealing meaning: helper.

Another Old Testament name with a strong meaning – God comforts. Nehemiah has followed new favorites like Isaiah and Elijah into the mainstream over the last two decades.

Three of the ten most popular boy names starting with N actually start with Nic. Turns out that more options follow!

An Italian form of Nicholas, and the given name of the philosopher Machiavelli.

A surname name that summons all the cool of legendary actor Jack, as well as our love of boy names ending with -son.

A literary option, thanks to Charles Dickens’ Nicholas Nickleby.

A New Testament name, Nicodemus means “victory of the people.” If you know the children’s novel Mrs. Frisby and the Rats of NIMH, it’s also the name of a wise old rat in the story.

Another Greek Nick name, it belonged to a first century saint. In Italian, it’s just Nicomede, hold the s. But with names like Atticus in vogue, Nicomedes might feel more appealing.

In India, Nikita is feminine – and perhaps it sounds that way in English, too. But Slavic languages turn ancient Niketas – victor – into Nikita.

Speaking of Slavic languages, Nikolai is the Russian version of Nicholas.

Another surname name, derived from Nicholas and company. Former president Richard Nixon muddies the name’s associations, but Nixon fits with favorites like Jaxon.

The capital of Kenya, Nairobi comes from a Maasai expression meaning “cool waters.” Now that Cairo ranks in the US Top 1000, it’s the kind of name that could follow.

An Edward nickname seldom heard today, but could fit right in with Max and Gus.

An Ethiopian name with an irresistible meaning: “he will wear a crown.”

Neil comes from Niall, a Gaelic name meaning champion. Also spelled Neal, it was a midcentury staple, but has faded in recent decades.

It sounds like Neil-with-an-s, but it’s actually short for Cornelius. The Dutch nickname name does fit with rising favorites like Hayes and Wells.

A name straight out of Homer’s Iliad, this ancient name has a modern vibe.

A Harry Potter name with plenty of polish.

If Miles ranks in the Top 100, why not this similar surname name?

A brother for Asher and Felix, this Hebrew name means pleasant.

A virtue name and an aspirational one, too.

What are your favorite boy names starting with N? 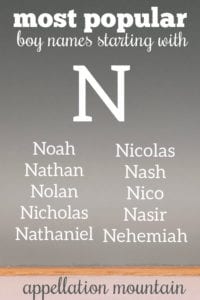 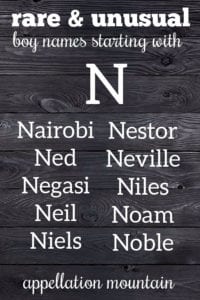