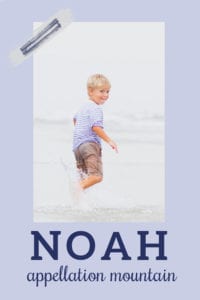 The baby name Noah comes from one of the best-known Old Testament tales. But it also offers a bright, modern sound.

Even if your knowledge of Christianity is limited, chances are you’ve heard the story of Noah.

He gathered the animals two by two and survived a great deluge.

Stories about devastating floods are common to many cultures. This one unfolds in the Book of Genesis, and involves an angry God and a faithful servant. Noah builds his ark according to divine instruction. He and his descendants survive, and God promises to never destroy the earth again.

Images of wooden boats and paired giraffes and monkeys abound in children’s stories. It’s easy to see the baby name Noah as something of an environmentally-inspired choice. After all, the story tells us that Noah’s bravery and tireless effort saved the animals.

Like many Old Testament names, the baby name Noah entered more general use among Christian families following the Protestant Reformation.

It comes from the Hebrew noach – comfort or rest.

Founding Father Noah Webster is among the most notable bearers from Colonial America. He’s the source of Webster’s Dictionary, and once published all manner of secular educational texts – something of an innovation in the new nation.

While the baby name Noah wasn’t particularly common in the US, it never left the Top 1000.

Characters in Oliver Twist and the Grapes of Wrath answered to the name. It remains on the fringes across the years, for fictional and real people alike.

What explains the revival?

Searches for the Biblical ark were much in the public eye in the 1950s and 60s. In fact, 1966 marked a big screen movie featuring John Huston as Noah. It was titled The Bible: In the Beginning.

From 1968 to 1970, ABC’s It Takes a Thief chronicled the adventurers of a gentleman cat burglar turned government spy. A young Robert Wagner played the titular thief; his government contact was named Noah Bain.

The series tracks closely with the jump in the name’s use. But was that enough to put the baby name Noah on the path to the US Top Ten?

And in 1976 novel turned 1977 miniseries Roots, there’s a character named Noah. (He’s Kizzy’s boyfriend until tragedy strikes.) The character appears in the 2016 reboot, too.

The name slowly gained in use, up a bit and then down again, through the 1970s and 80s.

All that changed in the 1990s, almost certainly thanks to actor Noah Wyle. He played John Carter – usually called by his surname – on the wildly successful medical drama ER.

In 1993, the baby name Noah ranked #203. ER debuted in 1994, featuring a young Noah Wyle as John Carter. He’s a third year medical student in the pilot; his career progressed over the next eleven seasons. He returned periodically up through the fifteenth and final season.

One reason to give Wyle credit for the success of the baby name Noah? His character’s name, Carter, also dashed up the popularity charts in the same era.

But it wasn’t just ER. Soap opera characters wore the name. And the first generation of boys named Noah were growing up. Plus, the similar Joshua – another Biblical a-ender – had become a Top Ten staple.

So do real life stories. A favorite: parents Glenn and Rebekah Markham had frozen embryos at a New Orleans hospital, hoping to expand their family. Following Hurricane Katrina and the devestating floods, doctors rescued the embryos, and the couple eventually welcomed a son named – what else? – Noah.

The baby name Noah blends so many positive attributes. The sound is upbeat and modern. It’s a hopeful name, one about enduring crisis and trials.

No surprise that this Biblical favorite has become a modern staple for our sons.

Do you hear the baby name Noah often?