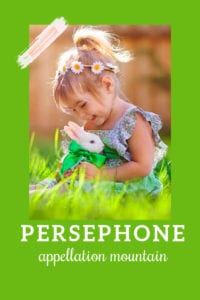 The baby name Persephone signals the changing of seasons, complete with an elaborate, stylish sound.

Thanks to Danielle, Sara, and Saranel for suggesting our Baby Name of the Day.

QUEEN OF THE UNDERWORLD

But the mythological figures reigns as Queen of the Underworld. At first glance it seems a little Goth.

Except the story is more complicated.

The daughter of Zeus and Demeter, Persephone is kidnapped by Hades – King of the Underworld. As his bride, she has dominion over the dead. The tale reads dark and gloomy. After all, she’s torn from her beloved mother.

But the goddess strikes a deal.

It’s also the original death and the maiden story. Renaissance paintings somtimes depict a young woman with a skeleton – the personification of death. Persephone’s story might be part of the inspiration.

The baby name Persephone becomes Proserpina in Roman mythology. The figure is sometimes called Kore – maiden, the forerunner of current favorite Cora. Her story has long been popular with artists and composers, writers and scientists. A number of creatures – moths, butterflies, even a sea snail – have been given the name.

While Persephone’s origins are debated, they can be rather dark, relating to death and destruction. But that’s not the meaning of the name as we understand it today.

Regardless of the mythological figure, the baby name Persephone never quite caught on in the US.

Things started to change in the 1960s.

Maybe it was the burgeoning environmental movement. There do seem to be more mentions of Persephone in popular culture – tiny ones, not nearly enough to explain a big increase in the name’s use.

The name does surface in a handful of places.

There’s a debutante by the name in the 2010 reboot of British television series Upstairs, Downstairs. A Hollyoaks character is another.

Many parents might also think of The Matrix series. The Merovingian operates a nightclub called Club Hel. Appropriately enough, his wife is Persephone.

But none of that explains the steady climb in the number of newborn girls named Persephone.

Instead, that seems to be all about the equally Greek Penelope. She’s the faithful, clever wife of Odysseus. The name – always relatively familiar – has become a twenty-first century style-star.

It’s not just Penelope. There’s Zoe (and Zoey), Chloe, and Phoebe, to name just a few of the gorgeous girl names ending with e.

Parents have sought out more options, like Top 1000 newcomers Calliope and yes, Persephone.

With ties to the natural world, like Willow and Daisy, and a sound that is popular with so many names right now, Persephone feels like a great choice for a stylish, seasonal name for a daughter.

Would you consider the baby name Persephone? 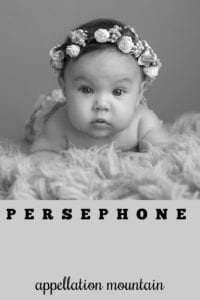