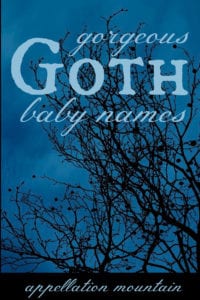 There’s a certain sophistication to these names. Sophia is too popular to really qualify, but otherwise it might. But bright and cheerful Sadie misses the mark entirely.

While brooding vampires and moody musicians don’t exactly make us think of babies, it’s surprisingly easy for Goth baby names to feel perfectly wearable. Even under the radar. You wouldn’t know that many of these qualify as Goth-inspired choices … unless you know.

And it’s certainly possible to love these poetic, romantic favorites without identifying with the subculture, too.

There’s something captivating about the story of Anastasia, youngest daughter of the last Tsar of Russia.  The entire imperial family met a grisly fate, but for decades, rumors circulated that Grand Duchess Anastasia had escaped. With the passing of time – and the 1997 musical with the happily-ever-after ending – Anastasia feels a little lighter. And yet, even without the historical story, the name means resurrection. That keeps Anastasia firmly on the list of Goth baby names.

Plenty of celestial objects have great names, and many of those names lean Goth. Bellatrix – a star in the constellation Orion – has a second association. The villainous, and wholly unrepentant, Bellatrix LeStrange from the Harry Potter series cements this name’s place on the Goth Baby Names list.  And just might make it unwearable, too, despite a richly appealing sound.

A sorceress who captivates Odysseus on his voyage, Circe is another Greek name pronounced with an ‘ee’ sound. That puts Circe in the company of Zoe, Chloe, and Penelope, but her bewitching nature earns her a place on this list.

An ancient name with a lot of strength, Claudia is rarer than Julia, but just as enduring. Characters like Monster High’s Clawdeen Wolf have worn forms of the name, but Claudia makes the Goth Baby Names list thanks to Anne Rice’s child-vampire in her Vampire Chronicles series.

The best known bearer of the name was Roman Emperor Caligula’s sister. Drusilla comes from a Roman family name, but makes the list for two reasons. First, there’s her association with her powerful and terrifying brother. More recently, Victorian vampire Drusilla terrorized California on Buffy the Vampire Slayer and its spinoffs.

Before it was the name of Sherlock Holmes’ little sister, Enola was “alone” spelled backwards. Nancy Springer’s engaging young sleuth puts a positive spin on her name – think “independent” rather than “abandoned.” But it was as a dark and forbidding choice, too, as in 2015 thriller Crimson Peak.

In Longfellow’s 1847 lament about the Acadian Expulsion, Evangeline Bellefontaine doesn’t die. But she’s separated from her beloved, Gabriel, and they spend their lives apart. Many years later they reunited, Evangeline as a Sister of Mercy nursing the sick in a hospital, and Gabriel on his deathbed. Romantic, tragic, dark.

We’ve loved Lily names in recent years, but Lilith is no elegant botanical. By tradition, she’s the first wife of Adam, cast out of Eden for her willfulness. Lilith comes from the Akkadian lilitu – night.  Lilith’s ties to Lily make her wearable; her connection to the night keeps her Goth.

Lucretia was a legendary Roman maiden, a third century saint, and a nineteenth century suffragette. Then there’s Lucrezia Borgia, of the Italian Renaissance.  Historical accounts vary, but most often we think of her as scheming and dangerous. In 2006 high school comedy John Tucker Must Die, a student in Goth-signature black and heavy eye makeup is called Kimmy, only to retort “My name is Lucretia!”

The tragic death of Ophelia in Hamlet lands this lovely name on the list. It reads darkly romantic and dramatic, too.

A character on Dynasty answered to Sable, probably chosen because their fur is used for coats – something the 1980s television extravaganza embraced. But the color is a dark brown-black, which makes it a perfect fit for this list, too.

2002 hit horror movie The Ring could be enough to put Samara on the list. But there’s a Babylonian legend about a man trying to evade death, which involves the place name Samarra. It’s been referenced by writers over the years, and it feels just right in the company of these names.

Tanith was the Phoenician goddess of the moon and stars – enough to land her on the Goth Baby Names list. Plus, her name means “serpent lady.” And lastly, Tanith is associated with human sacrifice in Ancient Carthage – though some historians argue that this is a tale told by Carthage’s enemies, not historical fact.  Add it up, and Tanith leans dark, indeed – though the name sounds perfectly reasonable today.

A Bond Girl name, but also the name for the evening star. Vespers is an evening prayer service. The name nods to religious faith, the night sky, and pop culture all at once. In our age of Harper and Piper, Vesper is also more wearable than ever before.

It might mean shadow, which feels quite Goth – but Zella’s exact origins and meaning are many. What’s certain: Zoe Marriott’s 2007 YA re-telling of a Hans Christian Andersen fairytale includes an evil enchantress. The Swan Kingdom makes Zella a villain. There’s also the Old Testament Zillah, which means “shade” in Hebrew, and might be the ultimate origin.

Bram is big in the Netherlands, short for Biblical Abraham and Abram. But Bram earns a place on the Goth Baby Names list thanks to Mr. Stoker, author of Dracula. The nineteenth century novelist created an entire genre of horror story and romantic anti-hero, and his original tale is constantly reinvented with every new generation.

Ravens are strongly associated with Goth imagery, and Corbin comes from the Old French corbeau.  Corbett is another surname-name associated with the bird; they probably started out as names for dark-haired people. High School Musical alum Corbin Bleu introduced it to a new generation.

Borrowed from Oscar Wilde’s novel The Picture of Dorian Gray, it’s a sleek, stylish name that fits with Julian and Adrian. But the image of a cursed portrait is just enough to earn it a spot on this list, too.

Another Harry Potter name, this time belonging to Harry’s chief schoolyard rival, the privileged and cruel Draco Malfoy. Unlike his aunt Bellatrix, Malfoy isn’t mad or all-bad. But he’s a villain for most of the tale. His name comes from the Latin draco, the source of our word dragon.  Danica McKellar – Winnie from The Wonder Years – named her son Draco in 2010, and who can argue with Winnie Cooper?

Or maybe this should be Gryphon, as in the majestic mythical beast.  Part-lion, part-eagle, the creature appears from Ancient Greece through medieval heraldry.  Griffin is also associated with the Welsh name Gruffudd. While it’s solidly established as a boys’ name, Griffin feels just Goth enough.

It’s Ciaran in Irish, but Kieran seems more familiar in the English-speaking world. It means “little dark one” which is pretty much the epitome of a Goth baby name for a boy.

From a religious perspective, the associations with Lazarus are positive. Christ raises one Lazarus from the dead.  Another is described as worthy to enter heaven, even though he was powerless and penniless in life. But because of that first Lazarus, we tend to associate this name with the reawakening of the dead, lending Lazarus a certain Goth vibe.

There are tons of Nick- names, and many of them have had a good run. There’s a Saint Nicodemus, a companion of Jesus during his lifetime, and several other men in the ancient world. Nicodemus is also a character in Mrs. Frisby and the Rats of NIMH.  This name makes the list almost purely on sound.  Nicodemus feels like it should be dark, or at least mysterious. A handful of fictional uses have capitalized on this potential.

A king of the fairies from the Middle Ages through Shakespeare’s A Midsummer Night’s Dream, and a moon of the planet Uranus. Like Nicodemus, Oberon makes this list partially on sound alone.

A gemstone name, Onyx might be one of the few that feels solidly masculine. Maybe that’s because the ending ‘x’ puts it in the company of Jax and Felix. The gem’s standard color – dark black – earns it a place on this list.

As in author Edgar Allan. A younger generation hears Poe as a Star Wars name, but it’s still wedded to the author.

It sounds almost like an invented name, a two-syllable, n-ender in the key of Callen. Except Talon is another word for the sharp claws on birds of prey. It’s a sharp and edgy choice for a son, a little more common that you might guess, but still distinctive.

If Hunter is too mainstream, how about Theron?  It’s the Greek equivalent, and a name that charted in the US Top 1000 for decades. In 1896, American author Harold Frederic penned The Damnation of Theron Ware, a story of a Methodist minister who struggles with his faith.  In 1968, author James Blish gave the same name to an evil magician in Black Easter. The name is wearable – especially with the rise of Theo and Theodore – but feels leans Goth, too.

A rook is a member of the crow family, and so another creature name.  But it is also the preferred name for the chess piece sometimes known as the tower. Both associations – with crows and siege towers – carry a hint of darkness.

Bear and Fox, Wren and Lark all feel like mainstream favorites. Wolf – as in Wolfgang – seems like an even more storied possibility. From werewolves to vampires, plenty of creatures are associated with wolves. The surprise isn’t that Wolf makes the list of Goth Baby Names – the surprise is how wearable this name seems today.

What do you think of Goth baby names? Would any of these make your own short list? What would you add? 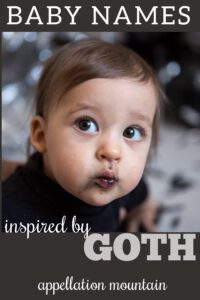 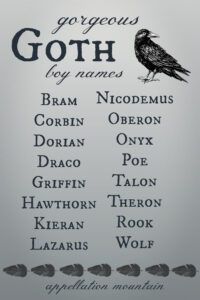 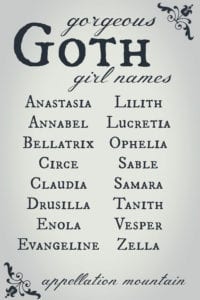