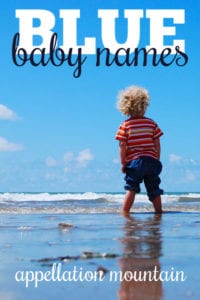 True blue baby names feel optimistic and bright. Sure, we can get the blues. But there’s also blue sky, true blue, and the wild blue yonder.

Plus, we’re wild for names inspired by color. Think Hunter and Olive, Scarlett and Rowan. But until now, shades of blue baby names have taken a back seat.

That feels like it’s changing. Navy made my list of Best Girl Names for 2020. And many of these have been heard on the fringes over the years.

Some of these immediately conjure a shade of blue. Others feel more obscure. And while many of these seem like great first name choices, other seem best suited as daring, adventurous middle names.

But they all belong in this part of the rainbow, true blue baby names that might wear beautifully for a child born now.

Sure, you might expect to find Tiffany on this list. The iconic jeweler uses a very specific shade of blue for their packaging. But Tiffany is more likely to be the mom than the daughter these days, so how ’bout Alice instead? It’s an icy white-blue, not named for the Wonderland girl, but for First Daughter Alice Roosevelt Longworth, a socialite and fashionista. This hit 1919 song is about her famous Alice blue dress.

The Spanish word for blue seems like an obvious possibility, with that zippy Z sound. It appears as a name a handful of times in the history books, and it’s been heard more recently, too. As with any import, pronunciation can be dicey. Still, this sound appeals, a name both rare and accessible – and oh so very blue!

Strictly speaking, azure is an English word for a shade of blue – though we rarely use it in everyday conversation. We borrowed it from the French, who translated the medieval Latin lazur as l’azur – as if the L were an article. It’s a specific shade of blue, the color of the sky on a clear day. And it’s used in heraldry, too, appearing on coats of arms. In 2020, 60 girls were named the elaborated Azura, too.

Beyonce and Jay-Z named their firstborn Blue Ivy, and Blue has history as a bold middle name stretching back decades. (Cher named her son Elijah Blue back in 1976.) With color names gone mainstream, Blue isn’t dramatically different from Grayson or Olive. It’s bold, but it’s a wearable one-syllable first, and a great middle.

Current US popularity: unranked; given to fewer than five girls in 2020

When Spice Girl Geri Halliwell named her daughter Bluebell in 2006, I thought it might catch on. It’s not so different from Annabelle, right? So far, it remains obscure – though perhaps it’s more familiar in the UK. I think it’s an obvious member of the blue baby names, but one that overlaps with nature names and all things botanical, too – plenty of reasons to embrace this obscurity.

Current US popularity: unranked; given to 40 girls in 2020

Greek myth gives this name to the enchantress who kept Odysseus captive seven long years. But it’s probably more familiar as a type of Caribbean music. From Harry Belafonte’s “Day-O” to “Under the Sea” from The Little Mermaid, it’s everywhere. And it’s the sound of the islands, a beguiling mix of history and rhythm, a style of music that immediately connects to its home.

There are plenty of shades of blue associated with colleges. This one ties to the University of North Carolina. But unlike Yale Blue or Columbia Blue, Carolina feels like a name. Well, it is a name, the Latinate feminine form of Charles, as in King Charles I of England. It’s a spin on classic Caroline, a name appearing in the US Top 1000 most years since 1900. That makes it among the most wearable of the blue baby names.

Like Azure, Celeste is sometimes used in heraldry, where it is known as bleu celeste – sky blue. It comes from the Latin caelestis – of the sky, or heaven. Nicole Kidman’s turn as Celeste in Big Little Lies has lifted the name in the rankings. But the layers of meaning – as a nature name and a spiritual one – feel very of the moment, too. Add in that it’s feminine, but tailored; familiar, but uncommon, and it’s an appealing option.

Current US popularity: unranked; given to fewer than five boys in 2020

At first, Cerulean sounds outlandish. But is it really that different from Adrian and Julian? It’s a different shade, but it shares roots with Celeste. It appears as a color name in England in the late 1500s; Crayola rolled out a Cerulean color crayon in 1990. It’s mentioned in 2006 blockbuster The Devil Wears Prada. But it’s not exactly a color we

Current US popularity: unranked; given to fewer than five boys or girls in 2020

Cobalt brings to mind Jacob and Cole, and it clearly belongs with blue baby names. But it has a wild backstory. First used to describe a type of rock that made miners sick, cobalt comes from kobold – the German word for goblin. It’s been a color name – and much less sinister – since the nineteenth century.

Cyan is a greenish-blue hue. It’s pronounced like Siam, only with an ‘n’ sound instead. Cian is a name from Irish myth, pronounced with a long ‘e’ sound. Given the popularity of Ryan, Cyan could be slightly confusing. And Kyan has seen some use, a sort of Kyle-Ryan mash-up. But Cyan belongs with blue baby names, a word familiar to anyone who has ever changed a printer cartridge.

Current US popularity: unranked; given to 41 girls in 2020

Delphine comes from Delphi, the ancient city. But I’ve added it here because of the delphinium flower. Also called larkspur, it’s most often blue or purple in color. I’ve seen Delphinia and Delfina, too, but Delphine remains most common as a given name. A second tie to the natural world – and to the ocean blue – comes from the meaning. Delphi and company come from the Greek word delphis – dolphin.

Denim fabric comes in lots of different colors, but we think of blue jeans as blue, the iconic Levi’s that took denim from heavy-duty work wear to everybody’s daily uniform. It feels rather name-like, a two-syllable choice akin to Declan or Callum, a more contemporary spin on Dennis. And no question, Denim belongs with blue baby names.

It’s the surprise in the ROY G BIV rainbow, a color name seldom used in everyday speech. The indigo plant has given us a dye to make all sorts of things blue for millennia. It remains in use today. There’s also a Canadian bookstore chain by the name, and a growing number of children, too.

Iris brings to mind a shade of blue-violet commonly associated with the flower, though they come in different colors. In Greek myth, Iris was goddess of the rainbow. But this color name feels thoroughly botanical. Vincent van Gogh painted them; in the Victorian language of flowers, the iris expresses faith and wisdom. It’s a powerful combination, all wrapped up in a colorful, ecovintage name.

Current US popularity: unranked; given to fewer than five girls born in 2020

If Larimar takes you to the Caribbean, that’s exactly right. Just like Calypso, this blue name has its roots in the island. In this case, the Dominican Republic. It’s the only place where blue pectolite – also known as larimar – is found. Miguel Mendez found it in 1974, and named it for his daughter Larissa, and the Spanish word for the sea – Larimar. It’s often a light green-blue color.

Current US popularity: unranked; given to 12 girls in 2020

Lazuli is cousin to Azure, both derived from the Arabic lazuward via the Latin lazulum. (Which eventually became l’azur.) Lapis lazuli was mined as far back as the 7th millennium BCE. During the Renaissance, it was ground up into pigments to create the most vivid blues in many a masterpiece. That’s a powerful set of associations, and yet, this unusual sound is among the rarest of the blue baby names.

Marina seems far more name-like than Lazuli or even Blue. It might come from Marius, or possibly from the Latin marinus – the sea. Since we all think of marine as an adjective for all things oceanic, and a marina as a place to dock boats, it’s equally effective as a blue baby name, too. It peaked in the US in the 1990s, but remains just familiar enough.

Navy benefits from the appealing color association, but also the middle ‘v’ it shares with Oliver and Ava and company. I called it one to watch for girls in 2020. But the associations with the military might make it an equal-opportunity choice. Another plus? It’s brief, but complete, a big sound in just four letters.

With River trending, Ocean makes a logical successor. Océane – pronounced oh SAY ahn – had a good run in France. It feels promising in the US, with a distinctive sound, and plenty of pleasant associations. Celebs have used it, with actor and fearless namer Forest Whitaker welcoming son Ocean way back in 1990.

The rise of Royal coincides with our love of King and Reign, epic choices that feel to the castle born. But Royal is every bit a color name, too, thanks to royal blue. It’s said that the hue was created for Queen Charlotte, wife of King William IV, in the 1800s. The British royal family is big on the color today, but then, who isn’t? It’s a staple choice, from suits to dresses to housewares and beyond.

Ruby ranks in the US Top 100, so how ’bout other gemstone names? Sapphire might sound a little less name-like, but it has every bit as much sparkle. We took the name straight from the Latin sapphirus – blue stone. As colors go, it’s a rich, intense shade of blue. A handful of fictional characters answer to the name, and more and more real girls, too.

Current US popularity: unranked; given to fewer than five girls or boys in 2020

We tend to think of the sea as green, but that’s not really right, is it? Both oceans and seas shift from vibrant blues to murky greens and everything in between. Sea sounds so much like an initial that it seems awkward as a child’s name – at first. But then, you might say the same of Kay or Jay, Dee or Bea – all choices that wear perfectly fine.

Few words so quickly conjure a shade of blue as sky. And it’s wildly popular – if you count surname-inspired Skylar and Skyler, plus Skye, Skyla, and other Sky-with-a-twist names. The imported Ciel and Cielo – the French and Spanish translations – make for even more sky blue baby names. It’s upbeat and optimistic, straightforward and strong. While it only ranks for girls, I think it’s a unisex option.

Midway between green and blue sits teal. We borrowed this color name from a bird. (More specifically, the stripe on the teal duck’s head.) We’ve only been using it to refer to the color since the early twentieth century. It’s a short, strong sound that seems like it would wear well for a child’s name. The nature tie-in probably feels like a plus for lots of parents, too.

True blue implies loyalty and trustworthiness. There’s no color True, but the word’s automatic association with the hue of blue puts it on this list. Reality star Khloe Kardashian gave the name to her daughter in 2018. A little bit virtuous, a tiny bit vintage – you can find Trues popping up over the years – and perfectly at home in the 2020s, True is a blue baby name with potential.

What blue baby names have I missed? Do you have any favorites on this list? 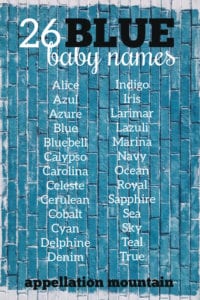 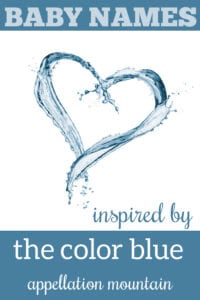 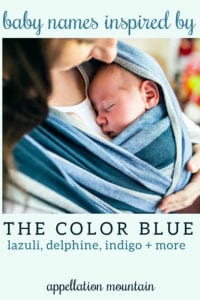