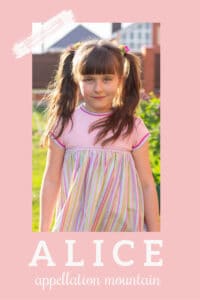 It’s tough to unravel the origins of the baby name Alice.

That’s because it’s one of many choice originating with the Germanic name Adalhaidis or Adalheidis. Adal means noble; heid or heit means type or kind. So Alice – and all of the related names – are the “noble type.” That feels like an auspicious meaning.

It shortened to Adelais and eventually Aalis in French. We know it as Adelaide, or Alice in English.

Besides Alice, there’s Ada and Adeline and Alicia and Alyssa, too, all still in use today.

A medieval favorite, the name was worn by saints and queens early days. Royals in Cyprus and Antioch answered to Alice as far back as the Middle Ages.

Plenty of related names caught on, too, across languages and cultures, with various forms remaining popular depending on language and culture.

PRINCESS ALICE OF THE UNITED KINGDOM

The name faded in popularity, but it eventually made a comeback.

Fans of royal history might appreciate the twisty turns that the baby name Alice took as various Victoria descendents gave the name to their equally well-born children.

Princess Alice of the United Kingdom married Grand Duke Louis IV and became Grand Duchess of Hesse and by Rhine.

Their daughter was also Alice, but she was known as Alix in German. Alix, strictly speaking, is a medieval French cousin to Aalis and company.

Princess Alix became Empress Alexandra of Russian when she married the future Tsar Nicholas II in 1894. Her life ended in tragedy.

Even more European princesses received the name in the 1800s, including Princess Alice of Battenberg, the mother of the future Prince Philip, Duke of Edinburgh.

Beyond royals and members of the nobility, the baby name Alice was wildly popular with parents from all walks of life during the era.

A storybook Alice would boost the name even more.

Lewis Carroll’s Alice’s Adventures in Wonderland was published in 1865. Carroll borrowed the character’s name from the daughter of a family friend, young Alice Liddell.

Even if you’ve never read the book, you know the famous scenes and players. We can picture the Mad Hatter’s Tea Party and the Queen of Heart’s chaotic croquet game, the slow fade of the Cheshire Cat to nothin’ but a grin.

Disney adapted the story in 1951, creating an animated classic. Tim Burton took on the tale for a 2010 live action update.

Countless re-tellings and reinventions of the story exist. There’s been a ballet, more than one stage production, a stained glass window in Lewis Carroll’s home church, and the famous Alice statue in New York City’s Central Park, to list just a few.

Millions upon millions of people have read the book. The original print run sold out; German and French translations quickly followed. Today, it can be found in nearly 200 languages. Since the original publication, the book has never gone out of print.

A sequel, Through the Looking Glass, was also a success.

This makes the name vintage, literary – and whimsical, too.

Born in 1861, Theodore Roosevelt’s wife was named Alice. The future president named his firstborn after his wife. When he took office, the seventeen year-old Alice Roosevelt became a celebrity. A fashion icon, the first daughter’s favorite shade of blue became known as “Alice blue.” Daring and unconventional, Miss Roosevelt was known as a nineteenth century wild child, partying, smoking cigarettes, gambling, and being seen in the company of men.

She joined the US diplomatic mission to Japan and the East in 1905, and her 1906 wedding to Congressman Nicholas Longworth III served as the social event of the season.

Suffragist Alice Paul was among the most influential of early activists for women’s rights. Born in 1885, she lived to see the Civil Rights Act passed in 1964.

Alice B. Toklas left San Francisco for Paris in 1907, where she met Gertrude Stein. The couple hosted a famous salon. Stein’s best-selllng book is 1933’s The Autobiography of Alice B. Toklas.

1880 marks the first year for which we have name popularity data in the US. At the time, the baby name Alice ranked in the Top Ten.

It remained in the Top 25 into the 1930s, doubtless boosted by the sweet storybook girl and the widely admired socialite.

As Alice faded, Allison/Alison and Alicia rose. In the 1970s, Alyssa joined them. By the 1990s, any of these forms beat out the original in the US rankings.

But look deeper, because those names represent just one branch of the family tree. All of the names come from the Germanic Adalheid, making this name cousin to Adelaide, Alix, Elke, Heidi, and others you might not guess.

As the name faded in favor of newer forms, the name’s image changed.

In 1967, Arlo Guthrie recorded “Alice’s Restaurant,” which inspired a 1969 movie. It was based on real-life restaurateur, born in 1941 – at the tail end of the name’s original popularity.

Remember Gertrude Stein’s partner? Years later, she became a 1960s counter culture icon, thanks in part a cookbook she published, complete with a recipe for cannabis brownies. The recipe features in the plot of 1968 movie I Love You, Alice B. Toklas.

A generation of future parents knew Alice as the faithful housekeeper on The Brady Bunch, and the hard-working diner waitress in a movie-turned-hit sitcom Alice.

And then Vincent Furnier took the traditional girls’ name as his stage name. Actually, first his band adopted Alice Cooper. But after they broke up, Furnier held on to the moniker. The “Welcome to My Nightmare” singer has said it was one of the best decisions he ever made.

Classic Alice might’ve stuck in style limbo, but women with the name continued to make their mark, particularly as writers.

But the best known writer by the name is doubtless Alice Walker. The author of 1982’s The Color Purple, as well as many other works, and a Pulitzer Prize winner, Walker’s career has spanned decades.

What explains the revival of the baby name Alice?

Beginning in 2002, Milla Jovovich starred as Alice in the Resident Evil films. It transformed the name from sweetly storybook to seriously powerful. The names are loosely based on video games, but the first film adaptation owes a little something to Lewis Carroll, too. Alice’s name is a nod to that fictional character.

That’s the same year that Twilight debuted, introducing the world to star-crossed lovers Edward and Bella, along with a host of supernatural characters. One of them? Edward’s fellow vegetarian vampire, Alice Cullen.

In 2015, Alice was top of many royal watchers’ contenders for the new princess born to Will and Kate. Inspired by the daughter of Queen Victoria – and Kate’s familiarity with Lewis Carroll – Alice was a possible name for the couple’s second child. (Though she was ultimately named Charlotte Elizabeth Diana.)

Even without so many prompts, chances are that the baby name Alice would’ve enjoyed more use. After all, a century had passed since it was last topping the charts.

And Alice fits with Emma and Abigail, Charlotte and Grace. They’re feminine, but don’t feel frilly. It marries a gentle sweetness with an undeniable strength.

What do you think of the baby name Alice? 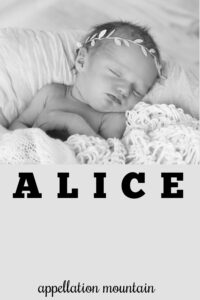 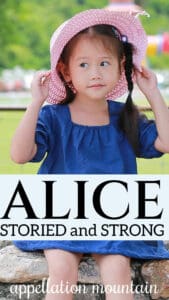