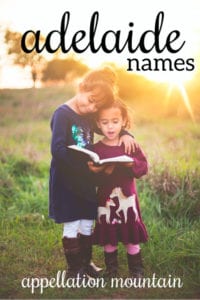 Adelaide names range from the wildly popular Adeline to rarities like Elke.

As girl names go, Adelaide remains a little outside the mainstream, barely in the US Top 300. But it makes a great alternative to Charlotte, a sister for Eleanor.

The name comes from Adalheidis, from the Germanic adal – noble – and heid – type. Names starting with the adal element abound, for both women and men. (Just check the As here.)

Royals and saints wore the name, including a wife of Holy Roman Emepror Otto I – who was both. Those are the ingredients required for a name to inspire many a variation: worn by royals and saints, baked for more than a millennium.

FROM THE HISTORY BOOKS

A -lace ending rather than a -lade one, this name appears in the history books. A handful of well-born medieval women answered to the name, from the 700s into the 1200s. Though, since many were French, it’s possible that they pronounced the name ah deh LAY.

They’re mostly confined to history books these days, but these evolutions of the name make it easier to trace the origins of Heidi.

Sister to William the Conqueror, she’s sometimes recorded as Adelaide. Adeliza held the title of countess in her own right.

An obscure variant, Aleydis garnered some attention when Tracy Chevalier gave it to a character in 1999’s Girl with a Pearl Earring. Though she’s not the girl in question; that was Griet, a servant. Aleydis was, in fiction and reality, one of Vermeer’s many children.

It’s a go-to nickname for lots of the Adelaide names, as well as nearly anything starting with Ad. But it also fits in with names like Sadie and Hattie.

A Dutch nickname for Adelaide.

Along with Ahlet, Aleit developed in German as a contracted form of Adelheit. The name was imported to Scandinavia, and continued to evolve.

Delia might be short for Cordelia, or possibly a cousin to Delilah. But Adelaide-called-Delia works every bit as well.

Ella, Stella, Bella … why not Della?

Adding a -ke or -ka forms a diminutive in several languages. It’s not a stretch from Adelke to Elke. The Germans pronounce it more like el keh, but it’s so rare in English that it might easily become el kee, which seems to be the Spanish version, too.

Part pig-tailed little girl in the Swiss Alps, part supermodel turned business mogul, Heidi packs a punch. After a good run in the 1970s and 80s, Heidi might be due for hibernation, but it’s holding steady so far.

Ada doesn’t feel like one of the Adelaide names. It stands on its own, a mini name with plenty of namesakes and an independent story.

Spare, tailored Adele re-entered the US popularity charts thanks to the powerhouse singer. But it doesn’t seem to have gained traction the way other Adelaide names have.

Just add -ina to any of the Adel- names.

A classic in its own right, storybook Alice brings to mind many a historical and fictional figure. It comes from contracting Adalheidis to Adalais, and then Alais … Alice.

There’s more than one backstory for Alina, but it certainly belongs with the Adelaide names – at least some of the time.

It’s tempting to lump Alison and Allison with surname names ending with -son. Except -on was sometimes used as a diminutive ending, like -ette or -ina. It survives in very few names, but this is one of the them.

Take Alicia, mix in a dose of the alyssum flower, and this 90s favorite is the result.

Add a stylish -ia ending to Adele, and suddenly Adelia feels like a cross between chart-topping Amelia and the Adelaide names.

You might hear this name in connection with penguins. French naval officer and amateur explorer Jules d’Urville named a species of smallish birds on the Antarctic coast after his wife, Adelie, back in 1840. It’s probably remained rare in English because it blurs with Natalie-hold-the-N, or maybe sounds like an Ada-Lee smoosh.

Pronounced AY leesh or sometimes AY lish, depending on your accent, Ailis is a Scottish and Irish form of Alice.

Parents might have invented either of these names, though they seem to have come from Ahlet.

Alix is a medieval French form of Alice, which puts it two generations removed from Adelaide, but still part of the same family.

What do you think of Adelaide names?  Are there any variations that you would use?  Which are your favorites?