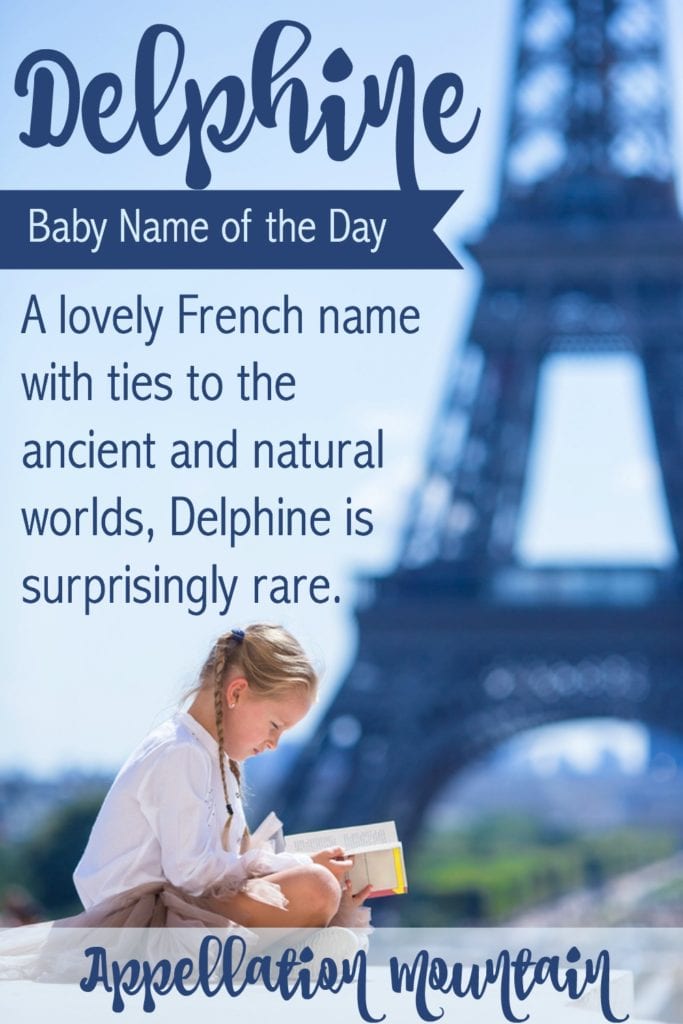 Delphine is a lovely French name for girls with ties to the ancient and natural worlds. Best of all? It’s completely under the radar!

This post was inspired by our conversation about rare 1895 Baby Names.

In the ancient world, Delphi was the home of an oracle dedicated to Apollo. The priestess would make her predictions from the temple. Delphi was considered the center of the world, and the name might come from the Greek word
delphys – womb.

Delphine: Add an A

Feminine forms of the name include Delphina, as in the fourteenth century Blessed Delphina of Glandeves. In Italian and Spanish, it’s Delfina.

Delphine is the French, and it sounds every bit as Parisian as Genevieve or Madeleine. In France, it’s actually in mom-name territory, having peaked in the late 1970s.

In the US, the name has one mark against it: in 1834, a New Orleans mansion caught fire. When rescuers responded, they discovered the family’s slaves living in exceptionally horrific conditions, with evidence of torture far exceeding what would have been considered acceptable. The lady of the house, Delphine LaLaurie, had been suspected of brutality for some time prior, and fled New Orleans ahead of an angry mob.

LaLaurie has become part of legend and ghost stories in New Orleans, and was part of American Horror Story: Coven – but I don’t believe it is so widely known that it is a problem.

In English, delphine is to dolphins as feline is to cats.

That’s because delphis or delphin means dolphin in Greek.

That makes this an under-the-radar animal name.

There’s a constellation in the night sky called Delphinus, named by Ptolemy in the second century. The story behind the constellation tells of Poseidon’s servant, Delphinus, who played matchmaker for the god and a beautiful sea nymph. The dolphin was placed in the sky as thanks.

In French, the word for dolphin is dauphin. It was the title of the French heir to the throne back in the day. His wife was la Dauphine.

Way back in the twelfth century, Guigues IV, Count of Vienne, was nicknamed Dauphin. That’s because he had the animal on his coat of arms, likely symbolizing charity.

The nickname stuck, and the land the family ruled became known as the Dauphiny. In 1349, the last count was heavily in debt and without an heir. He sold the lands to the King of France, on the condition that the heir to the throne would henceforth be known as le Dauphin.

A second nature name connection comes from the botanical world. While you probably know the plant as larkspur, the genus is called delphinium. It takes its name from its dolphin-like shape.

Delphine: By the Numbers

Delphine did have a brief burst of popularity in the 1920s. Perhaps that’s thanks to Madame de Staël’s 1802 novel by the name, which examined the question of women’s freedoms. Honoré de Balzac used the name for a character in Père Goriot, which inspired two film adaptations in the era.

There’s a character by the name on Orphan Black, and actors Majandra Delfino and David Walton have a Cecilia Delphine, born in 2012.

If you’re after a French name less common than Genevieve, but every bit as lovely, Delphine is a name to consider.

Would you consider Delphine for a daughter? Do you like Delfina/Delphina/Delphinia better?