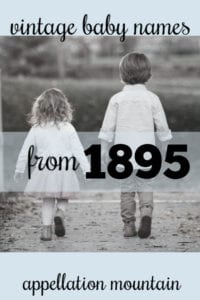 Were we really naming our sons Mayo and Vester? Were girls called Clifford and boys named Martha – or were both typos somewhere along the way? Did we really use Wm and Geo as boys’ names, or were they common abbreviations that made their way into the dataset? I’d bet money on the latter – but I don’t absolutely know.

My guess is that many of the rarest 1895 baby names will fade into oblivion, even though some would fit in beautifully today. This list includes one name that I’m watching closely, and a few others that I’m surprised don’t rank in the current US Top 1000.

To make this list a name must match the following criteria:

Lastly, most of the names on this list are not in the current US Top 1000.

Because these names were never common, it’s less likely that we’ll find them on our family trees, or spot the name in the historical record. They’re the opposite of favorites from the early 1900s, like Dorothy and Arthur – names that we’ve never really forgotten, even if they were briefly out of vogue for our children.

Read on for two dozen of my favorites finds from rare 1895 baby names.

In Verdi’s 1871 opera, Aida is the name of a princess held captive in Egypt. It was performed in the US as early as 1873, which seems like the right timing for the name’s popularity in 1895. Aida remained on the fringes of the US Top 1000 into the 1970s. Despite the popularity of Ava and Ada today, Aida remains rare.

Pan-botanical baby names like Petal and Fleur embrace the entire garden. While it’s easy to dismiss Blossom as a daffy 1990s sitcom name never intended for a real person, jazz singer Blossom Dearie was successful in the 1950s and beyond – and yes, it was her birth name. Blossom appeared in the US Top 1000 as early as 1882 and as late as 1931. It’s a great find among the baby names of 1895.

Delphia and Victorine made the 1885 list, so why not Delphine? It’s as delicate and French as Vivienne, and as tied to the natural world as Daphne. It comes from the ancient place name Delphi. But it’s associated with the Latin word for dolphin; delphine is the equivalent of canine or feline. Delphine ranked in the US Top 1000 in 1895, and continued to chart in the US through the 1960s.

Someone’s in the kitchen with Dinah! Or so goes the lyric from the 1894 song “I’ve Been Working on the Railroad.” This Old Testament name hugged the fringes of the US Top 1000 in the nineteenth century, and was even more popular from the 1940s through the 1960s. Credit the lovely Dinah Shore, who recorded more than eighty hits in those years, and also made appearances on movies and in television.

Torn between Genevieve and Isabella? Borrow the best of both with this Spanish form of Genevieve. Genoveva appeared in the US Top 1000 just three times: 1885, 1894, and 1895. But it’s a great name for a girl today, with the repeating V sounds and the potential nickname Evie. Genoveva is also operatic, thanks to Robert Schumann’s opera by the same name, based on a medieval legend. The name is romantic, elaborate – and perfectly wearable.

Don’t you love a good Leo name? There are some lovely, rare Leo names for girls, including Leontine. French in origin, it occasionally ranked in the US Top 1000 in the late nineteenth century through 1907.

We love place names for our children. Think Camden, London, Brooklyn, and Savannah. So why not Nevada? As with Genoveva, it’s the ‘v’ sound of Ava and Evelyn that makes this name so compelling.

Seldom heard today, Petra claims two origins. It serves as a feminine form of Peter. There’s also an ancient city called Petra. But from the 1880s through the 1960s, Petra hugged the fringes of the US Top 1000.

Between 1880 and 1908, Paralee often appeared in the US Top 1000. My theory is that Paralee evolved from a term in a card game that mean promises. William Faulkner used Paralee for a character; James Agee and Walker Evans chose it as a pseudonym for one of their subjects in Let Us Now Praise Famous Men. It’s a fascinating find, but one that has just about disappeared since the 1960s.

Harry Potter failed to revive Sybil. Downton Abbey missed, too. The ancient name means prophet, and the Sybil spelling has been more popular in the US. It’s tailored but feminine, and feels modern – but with roots that stretch back through millennia.

Thora sounds like favorites Cora and Nora, but it has different roots. The name comes from the Old Norse Thor, and Thora also appears as the wife of Viking king Ragnar Lodbrok in legends. If Thea is on the rise, why not Thora?

Zelda features on the list of Happy Names for Girls, though there’s more than one explanation for the name’s origins. Back in 1895, Zelda was a gently rising possibility. Perhaps Zelda Fitzgerald makes it feel more jazz age than nineteenth century. And, of course, to children of the 1990s and beyond, it’s a video game, too.

Italian, Spanish, and most Slavic languages include a form of Casimir, but in English? Not so much. Casimir belongs with the rare 1895 baby names because that’s the first year the name ever ranked in the US Top 1000 – but not the last! It remained on the edges of the US Top 1000 into the 1930s. It fits with names like Sebastian and Alexander, both so very popular today.

If Eben didn’t exist, we would have made it up. Instead, it comes from the same roots as Ebenezer – as in Scrooge! You’ll find Ebens in the historical record aplenty, but almost none on the playgrounds today.

Despite appearances, Evander is not an Evan-Alexander smoosh. Instead, it’s another ancient name – and another name that only ever charted in 1895. Evander of Pallene brought Greek culture, including writing and laws, to Rome some decades prior to the city’s founding. The name has been used periodically ever since, including boxing champ Evander Holyfield.

Depite the popularity of rhyming Miles, Giles remains overlooked. Maybe that’s because it lacks a famous bearer, like jazz musician Miles Davis. Or maybe it’s just waiting for discovery. Giles comes from the Late Latin Aegidius. Thanks to an eighth century saint, it spread throughout Europe, becoming Egidio in Italian, Gilles in French, and Giles in English. Saint Giles is one of the churches mentioned in the famous nursery rhyme that begins, “Oranges and lemons.”

Guthrie reads a little gruff, and a whole lot folksy (think Arlo Guthrie and Woody Guthrie). Back in 1895, Guthrie appeared in the US Top 1000 for the one and only time – ever! And yet, it’s a great Scottish heritage pick that’s just familiar enough.

Harley and Huxley are cool, edgy surname names today. How about Hurley, one of the rare 1895 baby names that feels pitch perfect in the twenty-first century? Hurley is most famous as a surfboard company turned clothing line. There’s also Lost’s Hugo “Hurley” Reyes.

While we’re talking ancient names, how about fiery Ignatius? Originally spelled with an E, the name was altered to resemble the Latin word ignis – fire. Saint Ignatius of Loyola makes this a famous saint’s name, and has kept it in use over the centuries. From 1895 through the 1930s, Ignatius hugged the edges of the US Top 1000. It’s been rare since.

A preppy surname name with an unusual ending, Jennings could be a great stands-out, fits-in choice. The surname originally comes from John, and was briefly very popular in the 1890s, reaching the US Top 300, likely due to populist presidential candidate William Jennings Bryan.

Larkin feels unisex, or possibly even feminine. But Larkin evolved as a nickname for Lawrence, or possibly an alternate form of Lorcan. Larkin ranked in the US Top 1000 for boys many years in the nineteenth century, but disappeared early in the twentieth. Today, it might substitute for Landon or Lawson.

Following Parker up the charts, Palmer has started to catch on. It refers to the palm branches brought back as a souvenir of the Holy Lands by pilgrims. The name was in steady use through the 1940s, before it started to fade.

One-part luxury automobile, two-parts short name for boys, Royce feels on trend. In fact, it ranks in the current US Top 500, proving that 1895 rarities can feel at home in the twenty-first century.

Walton combines the gentle nostalgia of the 1970s television series The Waltons, with a current sound. From the nineteenth century through the 1950s, Walton was sometimes used for boys. Today, it’s nearly forgotten.

What are your favorite rare 1895 baby names? Would you consider any of these for a child today? 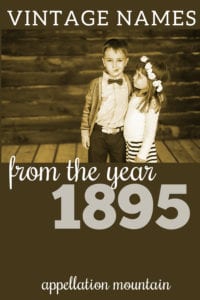 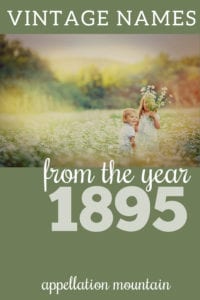