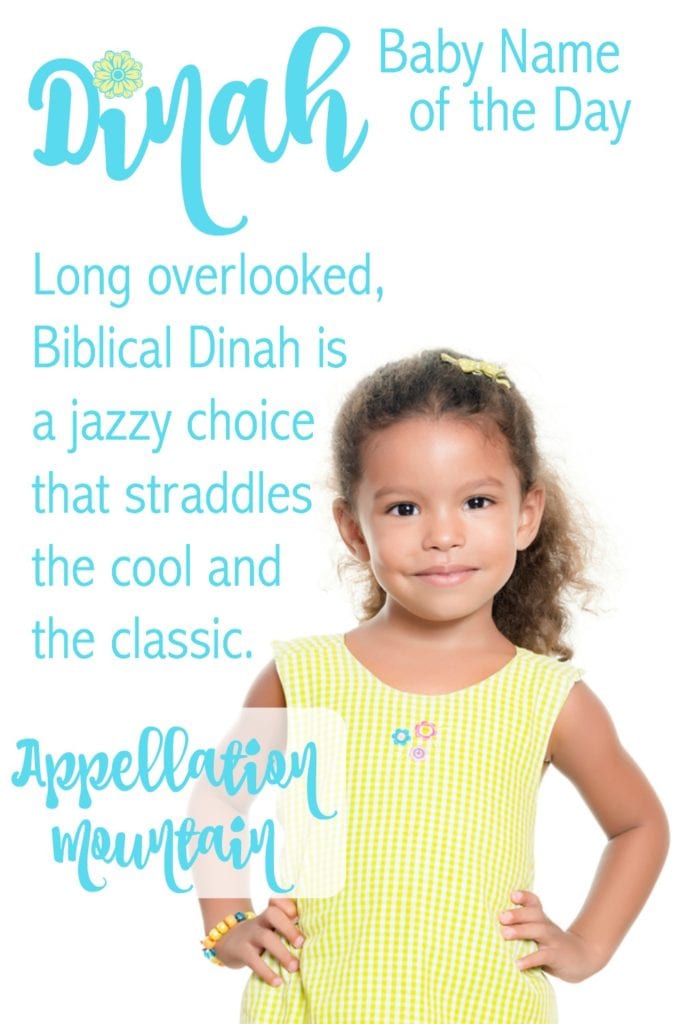 Long overlooked, Dinah could be a great alternative to some of today’s favorites.

Our Baby Name of the Day was inspired by this post on 1895 baby names. Thanks to Nessa for making the original suggestion!

Dinah: In the Beginning …

The Book of Genesis tells us that Dinah, daughter of Jacob and Leah, was raped by a prince of Shechem. Dinah’s brothers retaliated with force.

Anita Diamant’s 1997 bestseller The Red Tent imagines an intelligent, capable figure and a very different interpretation. In her story, the couple is in love, and wishes to marry.

The name comes from a Hebrew word meaning judged, or perhaps vindicated.

Like many a Biblical name, more girls were christened Dinah following the Protestant Reformation.

By the nineteenth century in the US, it became a generic term to refer to all enslaved women. Sojourner Truth used it in an 1850 speech. The New York Times referred to freed slaves by the name in an 1865 article.

The song “I’ve Been Working on the Railroad” dates to the 1890s, complete with pleas for Dinah to blow her horn. However, some lyrics are even older, dating to the 1830s. The name seems to be a generic term for an African American woman, at least in the earliest versions of the song.

Fast forward to 1923, though, and the name’s image had changed. The Broadway musical Kid Boots – and the movie version it inspired – struck gold with the song “Dinah,” a jazz standard that you’d probably recognize today. Louis Armstrong, Cab Calloway, and Dean Martin were among the many to cover the tune. 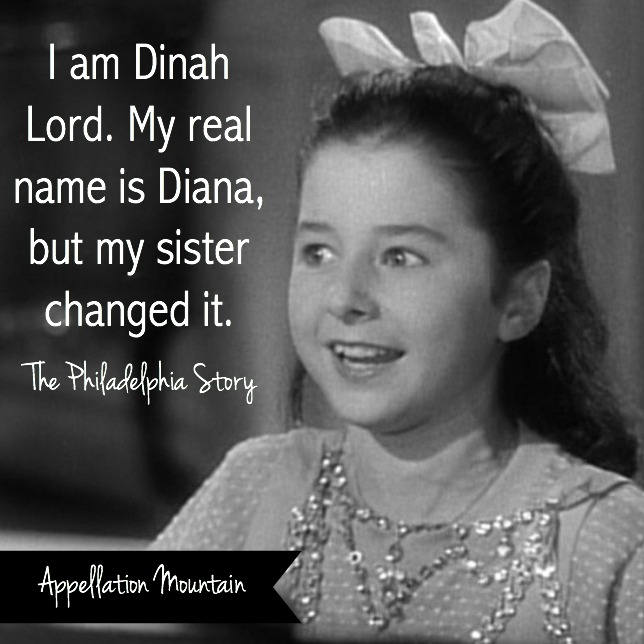 The Philadelphia Story started on Broadway in 1939, and became a big screen hit starring Katharine Hepburn in 1940.

The younger sister introduces herself as Dinah, noting that she was born Diana, “… but my sister changed it.”

And so I assumed that the name became fashionable in the 1920s.

Instead, the name appears on the edge of the US Top 1000 in the nineteenth century, then disappears until 1941.

The blockbuster film put the name back in circulation. In 1939, a mere 35 newborn girls were given the name. By 1942, that figure more than quadrupled, to 142.

More than the movie boosted this name.

A younger singer, born Frances Shore, performed the jazz standard “Dinah” during an early radio appearance. It stuck, and by 1939, she was appearing on national radio under her stage name.

Shore became a successful singer, and went on to host two television shows, the first in the 1950s, and another in the 1970s.

Other notable bearers of the name include:

It’s also the name of Alice in Wonderland’s cat, and it’s been heard on CBS soap opera Guiding Light.

Dina – hold the ‘h’ – is more likely to sound like Deena.

Dinah: By the Numbers

Today the name remains rare – almost shockingly so. A mere 60 girls were given the name in 2015.

This could make for the perfect fits-in/stands-out choice. Far less common than Nora or Clara, this one combines a vintage vibe with a certain spark.

Do you think this name can make a comeback?

This post was originally published on January 2, 2009. It was substantially revised and re-posted on July 11, 2016.