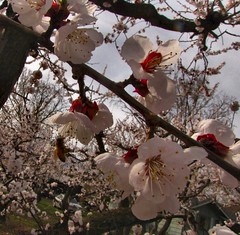 She’s a cousin to Flora, an all-encompassing botanical name with a surprisingly robust history of use.

Thanks to Gwen for suggesting our Baby Name of the Day: Blossom.

Plenty of outlandish names first surface on television – think of Boy Meets World’s Topanga, or too many soap opera characters to count.  Blossom was boosted by the eponymous 1990s television sitcom, but she wasn’t a true novelty.

Instead, Blossom ranked at the edges or just inside the US Top 1000 from the 1880s into the 1930s.  If the 100 year rule applies, she could be making a comeback right about now.

She’s a good candidate for a noun name.  Blossom comes from the same root as the words meaning to inflate or swell.  It was blotsma in thirteenth century English and blomi in Old Norse.  She’s clearly a nature name with a hippie twist, but she isn’t necessarily an impossible noun name.  It isn’t any stranger a choice than Azalea or Meadow.

But when the television series debuted, Blossom was fairly implausible as a given name.  She’d been out of use for more than a generation, and the character’s family was clearly meant to be at least a little bit offbeat.  While her brothers answered to the conventional classics Anthony and Joseph, their little sister was named after jazz singer Blossom Dearie.

Yes, Blossom Dearie.  You might not recognize the name, but listen to a track or three and you’ll probably find her distinctive voice familiar.  Born Margrete Blossom Dearie, she made her career on the supper club circuit.

Besides the singer, there was:

Maybe it is that last trio that puts Blossom in the right context – she was as unlikely an appellation as Bubbles by the 1990s, as much an oddity as Blossom Russo’s BFF, Six LeMeure.

But how ’bout now, circa 2012, the era of Harper and Serenity and Lake?  A Luella Blossom surfaced on a 2012 Babyberry Quarterly Report.  She feels the tiniest bit fusty – a cousin to Florence.  But Florence also sounds strangely appealing to the American ear these days, and she’s in the midst of a serious revival in the UK.  Factor in our affection for Lily and Autumn, and it is worth wondering: could Blossom follow the same trajectory?