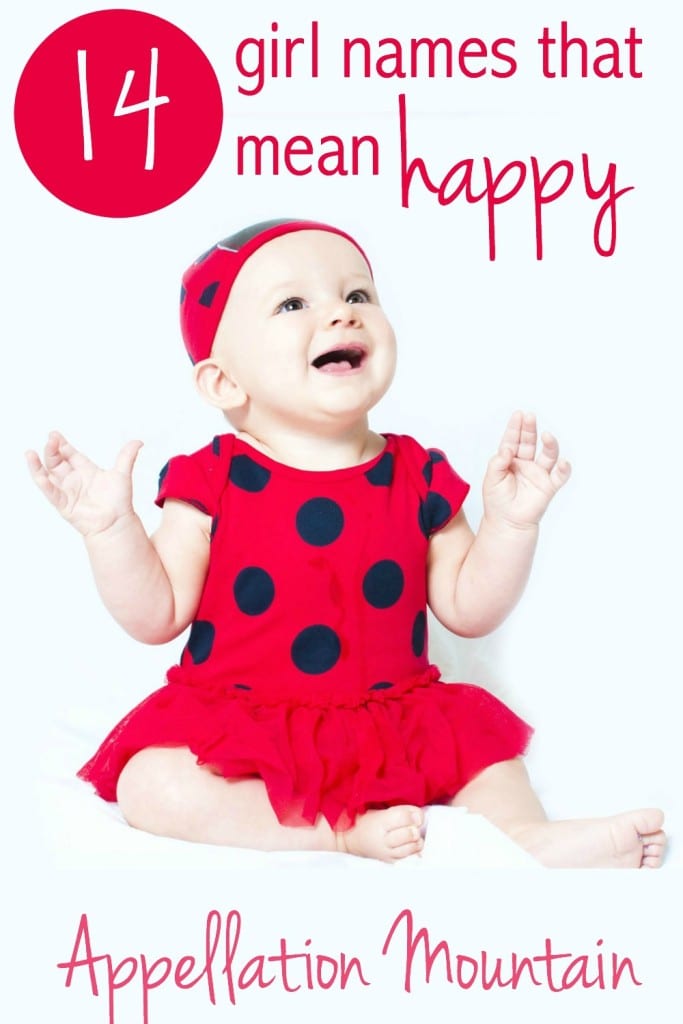 Some names just feel happy. Names like Lulu and Bonnie and Bree are joyful to day. I can’t imagine Elsie having a bad day or Betty being a grouch. Pop culture makes Pollyanna an optimist.

That’s all subject to opinion and experience, but there are happy names for girls by definition – names that mean cheerful or happy or joyous.

If you like the idea of happy names for girls, here are fourteen baby names that deliver.

Happy Names for Girls: A through H

ALLEGRA – Yes, Allegra is an allergy medication in the US, one with a seemingly bottomless advertising budget. But it is also a given name used by the stylish, from Lord Byron to Donatella Versace. Allegra Kent was a famous ballerina, muse to legendary choreographer George Balanchine. In music, the term allegro means cheerful, bright, lively, ultimately from the Latin alacer. If you’ve been watching The Little Einsteins, you know all about allegro. With nickname options Allie and Aggie, it’s the kind of name that should wipe out any thought of fenofexadine. 68 girls were named Allegra in 2014.

ANANDA– At first glance, this is just a spin on 80s staple Amanda. But Ananda comes from the Sanskrit word for bliss. The original (male) Ananda was an early disciple of Buddha, known as Guardian of the Dharma. Now Anand is the more familiar masculine form, and Ananda is an obvious culture-crossing possibility, boosted by MTV alum Ananda Lewis.

BEATA– I always thought of Beata as meaning blessed. And that’s true. Except if you follow the thread back a little farther, Beata ultimately comes from beatus – supremely happy; blessed. Beata could be a twist on Beatrice, but the names are not related. While it’s seldom heard in the English-speaking world, it’s reasonably common in Eastern Europe.

BLYTHE– This name is brief, even brisk. It comes from the same Old English soup that led to our word bliss came the word blithe. Blithe means happy – though it can also imply carelessness. Actress Blythe Danner has won Tony and Emmy awards in her own right, but you know her best as mom to Gwyneth Paltrow. If Brooke and Blair are mainstream options for girls, why not Blythe?

FELICITY– The list would be incomplete without this mix of modern television heroine and Colonial girl in calico. Nicknames like Fliss and even Flick have a certain retro cool. Felicity comes from a cluster of related names all derived from the Latin word for fortunate. Brother Felix is hotter than hot. Felicity seems like the most likely feminine form to catch on, but there’s also Felicia, and even the medieval Felice (which is masculine in Italian) might have possibilities as a middle name.

GIOIA– Celebrity chef Giada DeLaurentis reminded us about the many great Italian appellations that start with Gi – Gianna, Giovanna, even Giuliana. Gioia is literally the Italian word for delight, usually translated joy.

HANA – Hannah is a Biblical name for girls that was recently among the most popular in the US. Today it’s falling. Does that open the door for Hana? It’s as international as they come, with roots in Japanese, Arabic, Slavic, Korean, and, of course, English. It’s the Arabic Hana that puts this one on the list of happy names for girls. It literally means happiness or bliss.

JOY– Joy was in style limbo for years, but 2016 might be the moment for a comeback. First, we love our word names today, and happy names for girls like Blythe have attracted attention. Second, Joy is associated with two successful movies. There’s 2015’s biopic of entrepreneur Joy Mangano, titled Joy. And, of course, earlier that year, we all met Joy of Disney-Pixar’s Inside Out fame. 687 girls were named Joy in 2014, up slightly from previous years – so it’s likely we’ll see another increase in the future.

LETA– There’s more than one possible origin for Leta, but the Latin leatus – glad – puts Leta on the list of happy names for girls. Leta might also be spelled Leda, Lida, and Lita. The Leda spelling brings to mind the story from Greek myth of Leda and the Swan.

MERRILY– Merry might be too literal, but Merrily is an intriguing ends-in-ly name that might have potential.

NAOMI, NEOMI, NOEMIE– The Biblical Naomi comes from a Hebrew name meaning pleasant, so it belongs on a list of happy names for girls. And yet, I don’t find Naomi an especially light-hearted name. I think the Italian and French versions of the name, with the ‘oe’ spelling feel a little lighter – and perhaps happier, too.

SEELEY– Seeley is the given name of a male FBI agent on long-time television drama Bones, but it started out as a surname – and I’ve heard that it has some use as a given name, too. Seeley shares roots with Selig and Zelig, all from the Yiddish word for happy or blessed. And this brings me to my bonus addition to the list of happy names for girls …

ZELDA– Why didn’t I think of this one sooner? Zelda is another feminine form of Selig and Zelig, and one that feels very accessible as a girl’s name in 2016. Can’t you imagine twins called Zelda and Allegra, or Zelda and Leta?

Are there other happy names that come to mind? Or maybe names that just plain feel happy and joyful to you?