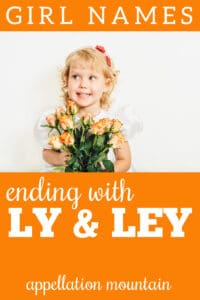 Girl names ending in LY and LEY range from chart-topping favorites, like Lily, to rare possibilities like Lively. Add in the former Top 100 choices, including Beverly and Kimberly, then stir in up-and-comers like Blakely and Oakley, and it’s quite the collection.

Plenty of names in this category most often end with LIE or even LEE, but they all share the “lee” sound, no mater the spelling.

Some of the most interesting choices might not be names at all. They’re a mix of places, archaic or poetic words, and adverbs and adjectives.

Ghastly doesn’t work. Neither does Vaguely or Suddenly. Unlikely is just that.

But in our age of Harper and Willow, Journey and Sloane, these girl names ending in LY all feel like options to consider, no matter your preferred style.

An obscure Adele/Adelaide variant, and also a type of penguin. That’s because nineteenth century French explorer Jules Dumont d’Urville named part of Antarctica Adélie Land, after his wife. When he discovered the penguins, they also took his wife’s name.

Most likely a cousin to Hadley.

As a surname, it’s also spelled Annesley and Ainslie, though the -LEY ending is most popular for our daughters.

A smoosh of Anna and Lee, dozens of possible spellings are seen.

Poetic Aracely means “alter of the sky,” from a Latin phrase. It’s also a title of the Virgin Mary.

One of the top names of the 1980s, Ashley started out as a surname meaning “ash tree clearing.” It was sometimes heard for boys, often because it was a family name. But then it became a generation-defining staple for our daughters.

Way back in 1978, America met the cast of soon-to-be-hit sitcom WKRP in Cincinatti, including Bailey Quarters. The name caught on for girls in the 1980s, then followed for boys, but ultimately proved a sister for Madison and Taylor.

Another English surname turned stylish first for our daughters – circa 1935. Today, Beverly’s granddaughter (or even great-granddaughter) would probably be Everly instead.

A feminine form of William, or a nod to one of the many accomplished women to answer to the name.

Blakely is a legit English surname name, but it also feels a bit like Blake + lee.

A Top 100 favorite for boys from 1960s into the 90s, Bradley feels fresher for our daughters today, thanks in part to Reese Witherpoon’s character on The Morning Show.

Another surname, Brinkley brings to mind former supermodel Christie Brinkley. She spent a record 25 years as the face of Cover Girl cosmetics, as well as too many other high profile appearances to list.

A casual nickname name most often associated with Caroline, Callie also feels like a stand-alone name.

Another Caroline spin-off, this one boosted by long-running Nickelodeon series iCarly.

The original English form of Cecilia, now quite rare.

A French place name associated with a type of lace traditionally made there, as well as a 1958 smash hit song titled “Chantilly Lace,” which made it clear the song was about a girl.

A boyish nickname for Charlotte, a unisex possibility in the key of Billie, and, of course, another girls’ name ending in the LEE sound.

Like Rosalie, Coralie is French – and also tied to the natural world, this time via coral.

A sweet nickname name that could be short for Dorothy or Dolores, Dolly feels vintage and unexpected.

One of those word names we’re not using – but maybe we should consider. Because it’s a surname, too, Early saw quite a bit of use earlier in the 1900s.

A cousin to Ailey and Isley, Eiley is one of several possible spellings of this surname-style name.

A synthetic surname, Emberly is simply nature name Ember + the -ley ending, modeled on Amberly and others.

A classic favorite and long-time #1 name in the US, Emily feels literary and refined.

Among the fastest rising baby girl names in recent years, Everly combines the sounds of traditional names like Evelyn and Emily, but with a twenty-first century sensibility.

Surname name Hadley was launched by bestseller The Paris Wife, the fictionalized account of Ernest Hemingway’s first wife, Hadley Richardson, during their time in France. It’s since followed choices like Hailey and Harper straight up the charts.

Speaking of Hailey, with multiple spellings, it’s tough to pin down this name’s true popularity. Some spellings blur the line with Hallie/Halle, but plenty of them work beautifully. There’s Hailee, as in Steinfeld, as well as girl names ending in LY, like Hayley (as in Mills, the Disney child star who launched the name in the 1960s), and spare Haley, too. As for the comment? That’s Halley.

Invented by the pop star, Halsey was inspired by both a New York street name and an anagram of the singer’s birth name, Ashley.

A surname name long associated with motorcycles and the open road.

Along with Isele and Eisele, this could be either an English place name or a German occupational surname for an ironworker. Either way, it’s a stylish, on-trend sound that fits with girl names ending in LY.

As a place name, Italy predates the Romans, and the meaning and origin are much disputed. Well over 5 million Italians immigrated to the US beginning in the nineteenth century, meaning that there are plenty of Italian-Americans, and maybe even more who just plain love the language, cuisine, and all things Italian. Italy has seen some use as a given name, as far back as the 1910s.

The French form of Julia, Julie sounds like a nickname, but it’s actually complete.

This month name fits right between traditional favorites June and August on the calendar, so why not on baby name lists, too?

Another Irish import, this one as kelly green as a shamrock.

One more surname name, this time English or possibly Scottish.

The 1960s made Kimberly a hit for our daughters, and Kim has been well-established as a feminine favorite ever since.

A cousin to Kenley and McKinley, and a modern favorite for our girls.

Yet another surname possibility.

Initially an Australian import, possibly with roots in an aboriginal language, Kylie caught on in the same era as Kyle.

Like Ashley, a great many of the girl names ending in LY and LEY refer to a clearing. In Langley’s case, it might also come from a name with Norse roots, meaning “long life.”

Lillie was once the most common. Now it’s the more botanical Lily.

It sounds like Lynn plus Lee, but Linley is another surname option.

Blake Lively graduated from Gossip Girl to Hollywood A-lister. She was born Blake Ellender Brown; Lively was her mother’s maiden name. It means energetic or vivacious, and sounds like an appealing rarity – almost a virtue name.

A cousin to Magdalene.

Familiar to most of us thanks to the lyrics of “Row, Row, Row Your Boat,” which has been around since at least the middle of the nineteenth century, Merrily is a cheerful word name option. From 1942 through 1944, it even ranked in the US Top 1000. Why? Nancy has the answer: Normandie Drake was a popular comic book character from Terry and the Pirates. In 1942, Normandie’s daughter, Merrily, was introduced. Nancy reports that the character Merrily was named for a real life Mary Lee.

Miley rhymes with Kylie, but it was inspired by just one woman. Child star Miley Cyrus was born Destiny Hope Cyrus. But as a baby, she was so “smiley” that she earned Miley as a nickname – and eventually adopted it as her first name. Cyrus has graduated from Hannah Montana to pop superstardom, establishing her name as a possibility along the way.

So many nickname names can be spelled multiple ways. Millie is no exception.

Originally a Mary nickname, Molly now stands on its own.

A Top 100 staple in the US in recent years, Natalie has a seasonal meaning: it refers to Christmas Day.

1995 novel turned 2000 movie Where the Heart Is made Novalee an option for American parents.

Take the oak tree, add the ever-popular LEY ending, and you’ll arrive at Oakley. (Oaklie and Oakleigh) are options, too. It’s also a popular brand of sunglasses.

The name of a Paris suburb ultimately derived from the Latin word for gold, Orly is also a Hebrew name meaning “light for me.”

A French feminine form of Otto.

A fabric pattern with Scottish roots and a lush, bohemian vibe.

Like Molly, Polly started out as a nickname for Mary.

A rock star surname name with that stylish LEY ending.

An upbeat Irish surname, it’s also spelled Reilly – as well as Rylie, Rylee, and Rileigh, to list just a few.

Origiinally a French surname, Romilly feels like a Ro-Milly mash-up.

Vintage, French and ever so stylish.

Sally started out as a nickname for Sarah, but all these years later, it’s a stand-alone girl’s name ending with LY.

Either a surname – think Mary Shelley, author of Frankenstein – or a Michelle nickname.

The biggest island in the Mediterranean, off the coast of Italy, Sicily is named for an ancient tribe, and has been ruled by many over the millennia – the Greeks and Romans governed it, the Byzantines, Arabs, and Normans conquered it. Sicily became a kingdom in its own right in the 1130, but we know it best as part of modern Italy.

A region of Greece, and maybe a place name with potential as a first, too.

A bold floral name, made more familiar by a character in JM Barrie’s Peter Pan.

A Matilda nickname that feels familiar in our age of Millie.

From Chitty Chitty Bang Bang to Sister Wives, Truly and Truely have a long history of sparing use, a virtue name with a stylish sound.

An archaic English word meaning truly, Verily is a nearly forgotten word that might be prime for revival as a given name.

A successor to 1980s favorite Whitney.

A saintly short name, sometimes pronounced Zaylee, boosted by our love of the initial Z.

What do you think of these girl names ending in LY? Are there any other possibilities you would add to this list?