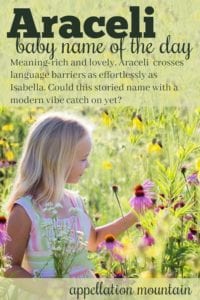 Araceli sounds fresh, modern, and ethereal. Two of those three things are true.

Thanks to Kathleen for suggesting our Baby Name of the Day.

This name feels like a modern invention, doesn’t it? But nothing could be further from the truth! Instead, it’s a Marian name, associated with a title traditionally given to the mother of Jesus.

In Latin, the phrase Ara Caeli means “the altar in heaven.” I’ve also heard it translated as “the altar in the sky.” Either way, we have to head to Spain to learn more.

Lucena, Spain sits in Andalusia. It’s said the settlement was founded by Jews; it certainly became a center of Jewish life in the Middle Ages. The original name might have been Eliossana, from the Hebrew phrase “God save us.” The community focused on trade and industry and grew wealthy.

Others attempted to take over the city; first, the Moors. Then King Ferdinand of Castile, who conquered Lucena in the thirteenth century. That means that Catholicism came late to Lucena.

It wasn’t until the 1400s that a parish church was constructed. In the 1500s, an image of Our Lady of Araceli was brought from Rome, and she became the patron of Lucena in 1948 – in church terms, that’s pretty much yesterday.

Visit Rome, and you’ll still find the Basilica of St. Mary of the Altar of Heaven – Basilica di Santa Maria in Ara coeli al Campidoglio in Italian. It’s a shrine, located atop the Capitoline Hill. It’s a shrine, packed with relics, especially those from Saint Helena, mother of Emperor Constantine.

I’m a little fuzzy on the first use of the Marian title. The church took its present name sometime in the 1400s; a piece of artwork in the church by the name dates to 1636. But the site is far older, and has a history that predates Christianity by centuries. It’s Rome, after all!

A second church in Vicenza, Italy, also bears the name. It dates to the late 1600s.

They weren’t the first. There’s an artist by the name, born in Ecuador in 1913. The beginning of her career coincides with the name’s rise, but that feels a little obscure.

It seems to be used in the Philippines, too, where there’s also a city and parish by the name.

Depending on your background, you might want to pronounce this name in Latin: ah rah KEL ee, or Italian: ah rah CHEL ee.

But because the overwhelming majority of Aracelis are Latina, you’ll hear that third syllable pronounced like sell, rhymes with bell.

That pronunciation makes Araceli a lovely, liquid name. It flows, just like Ariana and Alaina and Liliana. It’s easy to imagine it fitting right in with so many names in favor today, a sister for Isabella, an alternative to Cecilia or Lorelei.

And yet, I’d guess that the majority of parents aware of this name fall into one of two categories. Either they’re Spanish speakers, or they’re Catholic. Or maybe both.

But does that mean it’s off limits for other families. Names like Elena and Camila aren’t exclusive to Latina families.

All of this adds up to a name that could be going places. Except that the numbers? They suggest that Araceli’s best days are in the past. The name appeared in the US Top 1000 from the late 1960s onward, briefly reaching the the Top 500. But it’s fallen out of the rankings since then.

Of course, that might cement Araceli’s status as an underused gem, meaning-rich and stylish, a modern-sounding name that isn’t novel at all.

Do you think this name works for non-Spanish-speaking families, or is it open to all? Would you consider Araceli for a daughter?