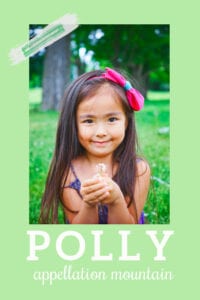 We’ve overlooked the baby name Polly, even as Molly has become a modern staple.

Thanks to Claire for suggesting our Baby Name of the Day, and to Nicky for requesting an update.

Everyone knows a Mary or three.

Long a go-to name for girls, Mary became so popular that nicknames were required. Malle and Molle became short forms in medieval English. Those led to Molly, and Molly? Rhymes with Polly.

Rhyming nicknames might seem like a stretch from a twenty-first century perspective, but Margaret led to Meg and Peg and Peggy. William became Will and Bill.

We don’t do this today – imagine introducing your son Benjamin as Ken, or shortening Lillian to Millie. You could. But it strikes us as odd. But centuries ago? Names worked differently.

This means, of course, that the baby name Polly picks up all of Mary’s possible and debated meanings: beloved, of the sea, bitterness, wished-for child, rebellious.

It’s been associated with parrots – and crackers – since at least 1616. And while it’s not a negative association – after all, we’re naming our daughters Birdie and Wren – it’s a widely-known one.

As for the nursery rhyme “Polly Put the Kettle On,” it dates to the late 1700s an published around the turn of the century. Some versions used the name Molly instead.

There’s a folk song called “Polly Wee” which seems to live on as children’s song and another, darker tale of heartbreak and murder called “Pretty Polly.” Both were recorded in early twentieth century America, but are mostly forgotten today.

“Polly Wolly Doodle,” on the other hand, seems to remain familiar. Shirley Temple belted it out on the big screen in 1935, and it’s been sampled and reinvented well into the 2000s.

And then there’s Pollyanna.

In 1913, Eleanor Porter gave the name to main character in her novel. Porter’s orphaned Pollyanna always behaved selflessly and did her best to look on the bright side. Child star Hayley Mills played the role most recently, way back in 1960.

You might hear the term Pollyanna used dismissively. It can suggest misplaced optimism. But the original character used positive thinking to deal with real life difficulties, which was a little different.

CS Lewis’ Chronicles of Narnia series includes a character by the name, as does Margaret Sidney’s Five Little Peppers.

All of this cements the baby name Polly as a sweetly innocent name from the past.

In the 1990s, a small English company was taken over by international toy powerhouse Mattel. The English company’s signature toy, Polly Pocket, became a worldwide hit.

Polly Pocket dolls were tiny – less than an inch tall – and all of their accessories and living spaces folded up into various cases and contraptions, like jewelry. Mattel soon made them slightly larger – though still under four inches. An animated web series followed.

While the dolls were discontinued relatively recently, rumors of a re-launch are already circulating.

This means, of course, that many of today’s parents grew up with the baby name Polly firmly associated with a favorite toy.

POLLY WITH AN EDGE

Not every Polly was as sunshiny as the orphan or as sweet as the nursery rhyme.

Piper’s best friend, pre-prison, in Orange is the New Black, also answers to the name Polly.

Meg, the heroine of A Wrinkle in Time, grows up over several books and has a daughter named Polyhymnia – as in the Greek muse – who prefers Polly as a nickname.

Proof that the name can – and does! – grow up nicely.

But it’s music that lends the baby name Polly an edge.

In 1728, John Gay penned The Beggar’s Opera, a satirical take on the Italian operas popular in London at the time. His Polly is the virtuous daughter of a criminal mastermind. After a whirlwind romance, she plans to marry Mack the Knife – also a crook.

Bertolt Brecht adapted it as The Threepenny Opera in 1928. Threepenny was originally German, but translations quickly followed.

None of this changes the sweet, sepia-toned image of the baby name Polly.

But the name continues to surface in music and lyrics.

It’s the given name of alt rock musician PJ Harvey.

The Kinks also recorded a song by the name.

So did Nirvana. First released on their wildly successful 1991 album Nevermind, it’s based on a real-life tragedy. It’s a mournful song, about as far from a lullaby as you can get. In 1993, not long after the song’s release, the horrific kidnapping and murder of Polly Klaas dominated headlines. The song was performed on MTV Unplugged in 1993, and released on the live album version of the show a year later.

The song’s haunting imagery shifted a generation’s perception of the name, just slightly.

Even as Molly surged into the US Top 100 during the late 1980s, the baby name Polly faded.

In fact, the name last appeared in the US Top 1000 way back in 1977. 1980 marked the last year more than 100 girls were given the name. In 2015, we welcomed just 50 newborn Pollys. Polly Cooper is Betty’s troubled big sister on hit teen drama Riverdale.

That’s more than enough to keep the name in the public eye.

All of this opens the door to seeing the baby name Polly as a fresh possibility. It could substitute for Top 100 favorites like Ellie and Sadie.

It might even offer a fresh nickname option for popular Penelope or rare Pomeline and Apolline. Honoring a Paul with a Polly seems reasonable, and again, it might be short for Paula or Paulina.

But the baby name Polly could easily stand on its own, a sweetly vintage name with more strength and edge than we might initially guess. Instantly recognizable and surprisingly rare, it offers a combination that many parents seek.

What do you think of the baby name Polly? 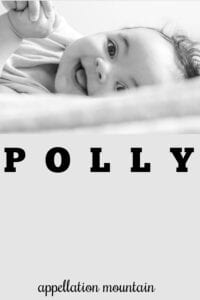