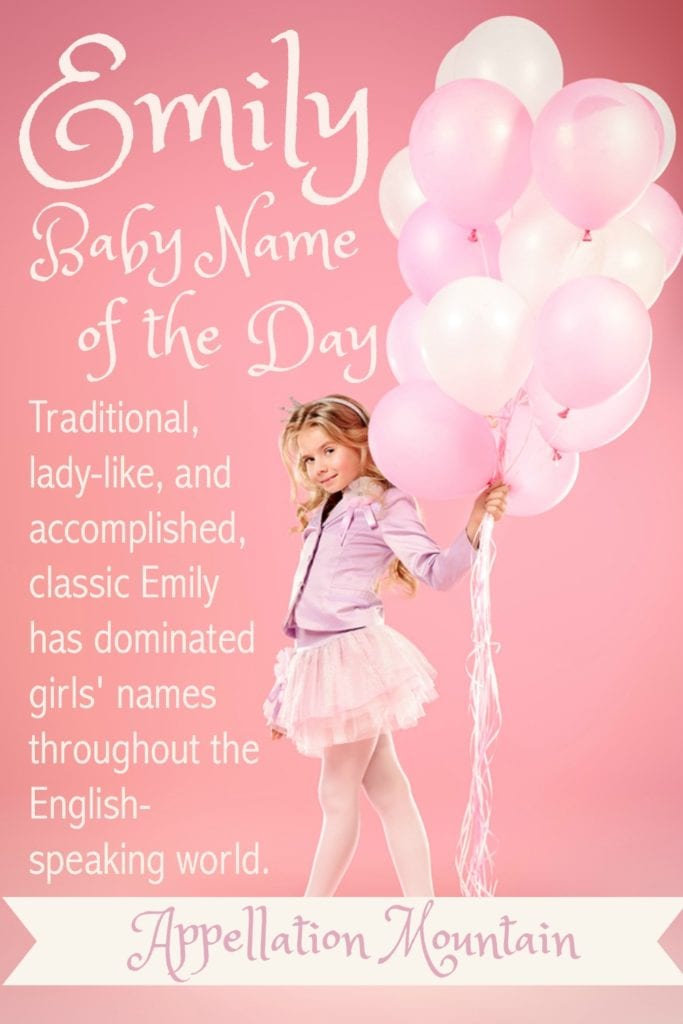 Emily reigned as the #1 name for a decade, and remains very popular today.

Thanks to Lulu for suggesting our Baby Name of the Day.

Unravelling the threads between Emily and Amelia presents some challenges, but they’re not directly related.

Emily, on the other hand, starts out as a feminine form of the old Roman family name Aemilius, via the masculine name Emil. In Latin, aemulus means rival.

But in real life, those lines blur.

Royalty gets credit for reviving the name in the eighteenth century.

The future King George II welcomed a daughter in 1911. Her name? Amelia Sophia Eleanor. George may have become King of Great Britain, but he was born and grew up in northern Germany. His daughter Amelia was born in Germany, too.

Her family called her Emily.

George II’s grandson ascended the throne as George III in 1760. He, too, named his daughter Amelia, honoring his aunt. Both Amelias shared the same affectionate nickname, too.

The two princesses helped revive the name in their adopted land.

The first wave of late eighteenth and nineteenth century women by the name accomplished much.

Texas gives us Emily Austin Perry. At one point, she was considered the wealthiest woman in Texas, at a time when few women owned any property. Mrs. Perry established educational institutions, helped secure railroad service, and more.

Then came 1964 movie The Americanization of Emily, set during World War II and starring Julie Andrews as an Englishwoman who falls in love with an American soldier. The movie included a title song, simply “Emily,” which became quite popular. Tony Bennett and Frank Sinatra both recorded it.

The song could easily inspire parents. It tells us that the name “… has the murmuring sound of May … All silver bells, coral shells, carousels …”

We also met Emily Elizabeth, the young owner of Clifford, the Big Red Dog. The duo has starred in more than six dozen books, a television series, and may still get a full-length feature film. Norman Bidwell wrote the first book in 1963.

Emily: Name of a Generation

The name remains equally popular throughout the English-speaking world.

Other spellings appear in the current US Top 1000, including Emilie, Emmalee, Emmilee, and Emely. And, of course, dozens of other Em- names, like Emerson, have risen in recent years, too.

Today, actresses like Blunt and Deschanel, songs from Simon & Garfunkel and Lady Antebellum, and fictional characters on shows like Revenge, Pretty Little Liars, and Criminal Minds combine to make this something of an everywoman name.

All of this makes Emily an indisputable classic, as traditional and enduring as Elizabeth. The downside is that the name can feel anonymous; almost the Jennifer of the 1990s.

Today the name is fading, and probably seems ready for a rest. But it has achieved such traditional status that it will almost certainly remain in heavy use – and one day, even feel fashionable again.