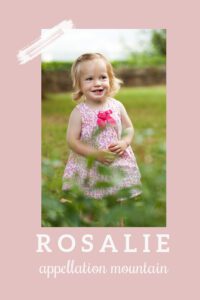 That gives us the name Rosalia.

Back in twelfth century Sicily, the well-born Rosalia withdrew to live and pray alone in a cave. She eventually died there, too.

When a plague struck Palermo in 1624, a local hunter claimed that he’d had a vision of the forgotten Rosalia.

Following her directions, he found her cave, rescued her relics and brought them back for a procession through the town.

Legend tells that it worked, and Rosalia became a saint.

The festival is still celebrated annually in Palermo, as well as other communities – including in Brooklyn’s Bensonhurst neighborhood.

The name Rosalia was pretty rare in the US, though not unknown.

The baby name Rosalie is simply the French form of Rosalia. It’s heard elsewhere in Europe, too.

In France, the name peaked early in the 1900s. It’s enjoying a modest comeback in recent years.

But let’s go back to the early twentieth century for now.

Over the next few decades, Rosalie gained in use, entering the Top 200. It was the age of Dorothy and Marjorie, Jacqueline and Josephine. Rosalie mixed French influence, with that enduring three-syllables, ending-in-ie/y pattern.

It might have continued to be heard in steady numbers, but then came Rosalie on Broadway in 1928.

The musical turned into a big screen extravaganza, released in December 1937.

It’s about a princess from afar – Rosalie Romanikov of Romanza – who comes to the US. She falls hard for a soldier, a football player at West Point. Heartache and hilarity follow, but everyone lives happily ever after. Nelson Eddy played the boyfriend; Eleanor Powell, the princess.

MGM’s film jettisoned the original Gershwin score for songs by Cole Porter, but the title track – also called “Rosalie” – was unchanged, and also popular in the era.

Not only did Hollywood brush up the score, they also added dancing – lots of it, to cater to leading lady Eleanor Powell’s status as one of the era’s most famous dancers. An elaborate scene features Rosalie tapping atop a giant drum – if you’ve ever seen the 1974 MGM retrospective That’s Entertainment, it’s included.

While Rosalie isn’t a familiar movie today, it was a hit then – and propelled the baby name Rosalie to #66 in 1938.

By the 1940s, the baby name Rosalie was falling. After 1988, the name left the rankings entirely.

And yet, it’s heard steadily across the ages. A nineteenth century Swedish feminist, a 1960s American folk singer, a British character actress, and Dutch model also answered to Rosalie.

It would be a few years post-Gold before Rosalie enjoyed a revival, though.

And for that, it would take Hollywood once more.

Stephenie Meyer created an early twenty-first century pop culture sensation with Twilight, the story of a family of vegetarian vampires. It’s a love story, featuring Bella and Edward – as well as Edward’s rival, the werewolf Jacob.

Much was made of Isabella and Jacob as popularity baby names, influenced by the series. Except that the first Twilight novel in the trilogy debuted in 2005. Isabella already ranked in the US Top Ten, and Jacob stood at #1.

But the series proved influential for naming nonetheless. Other vampires in the Cullen family included Esme, Jasper, Alice, Emmett, and yes, Rosalie.

Each of those names increased in use, often sharply, particularly after the first movie adaptation came in 2008.

In the books and movies, Rosalie Hale is beautiful and suspicious of human Bella – at least at first. She grows to become one of Bella’s fiercest protectors.

While many have credited Meyer for starting the trend, it’s a little more complicated. Meyer had a knack for choosing vintage names – after all, her vampires were supposed to be antiques. The story told us that Rosalie Hale was born in 1915. Meyer zeroed in on under-used names that felt period-appropriate for her characters, and promising for the twenty-first century, too.

There’s no question that Twilight turbo-charged the names, including Rosalie.

By 2012, the year the final installment in the Twilight series debuted on the big screen, the baby name Rosalie ranked #404.

The baby name Rosalie last peaked in the 1930s. If the one hundred year rule applies, this name’s revival is right on time.

And why not? It combines several trends and patterns.

We love a floral name, and Rosalie is both clearly tied to Rose and a little distinct, too.

For parents after a name mixing strength and femininity, vintage status and current sound, the baby name Rosalie is an obvious choice.

What do you think of the baby name Rosalie? 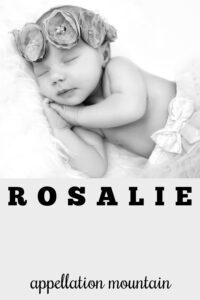