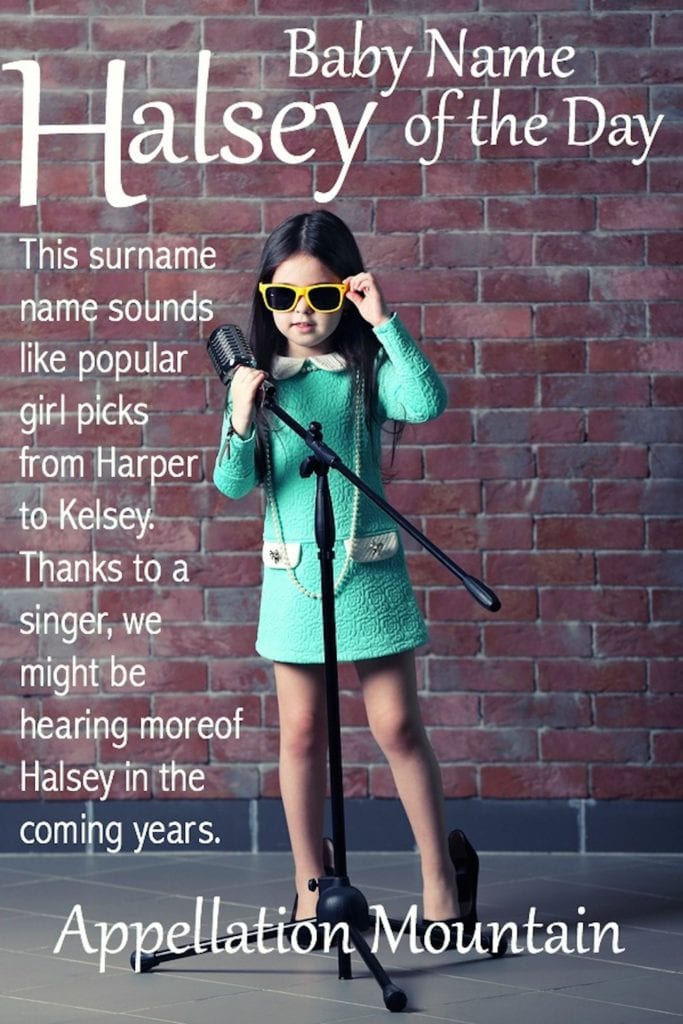 Love surname names for girls? Looking for something fresh and new? Halsey might belong on your list.

Our Baby Name of the Day is inspired by the pop singer.

Halsey is a surname, but the origins aren’t clear. It’s almost certainly derived from a place name, possibly in Essex or maybe Somerset.

Like many a surname, you can find a handful of people who wear it as a first name through the years.

In the US, a handful of places bear the name, along with a historic home or two.

If this surname is familiar, it might be thanks to a famous admiral.

William Frederick Halsey, Jr. – better known as Bill or Bull – served during World War II. He served in the Pacific, becoming commander of the Third Fleet.

This made for a tough gig. We’re talking Guadalcanal. But he got the job done, ultimately taking command of Pacific. More than one battleship has been named in his honor.

A very different William also answered to the surname.

But this name is in the spotlight thanks to Ashley Frangipane.

Who, you might ask? You know her by the mono-name Halsey.

Ashley played all sorts of instruments as a child, started writing songs as a teenager, landed her first contract in 2014, and released her first studio album in 2015.

Where did she find her unusual name?

It’s an anagram of Ashley, but the singer also noted that there’s a street by the name in Brooklyn. A New York City subway station bears the name.

Halsey: By the Numbers

The singer released her debut studio album in 2015. That is much too recent to show an impact on the popularity charts. Fewer than five girls received the name in 2015.

But here’s why I plan to watch this name:

Interestingly, the trendlines suggest this name has been going girl for decades.

Until the 1980s, the very few bearers of the name tended to be male. But the numbers suggest that parents changed their minds during the decade. Over the last forty years or so, Halsey has become far more common for girls.

Credit Ashley and Hailey and Kelsey, too. Famous admiral aside, this just plain sounds like a girl’s name.

And yet, it’s too soon to declare this name unwearable for a son. A biopic of the admiral, or a fictional character by the name could just as easily push Halsey into broader use for boys.

Do you like this name better for a son or daughter?