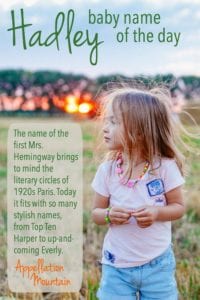 Hadley soared as the world fell in love with a real-life literary figure from a New York Times bestseller.

Our Baby Name of the Day comes from the Sweet Spot Girl Names list.

Elizabeth Hadley Richardson married the young Ernest Hemingway in 1921. Her first name had disappeared by the time she met Ernest; it’s not mentioned in his memoir, A Moveable Feast. She’s just plain Hadley in the dedication to his 1926 novel, The Sun Also Rises, too.

A Moveable Feast was published posthumously in 1964. During Ernest’s lifetime, his first wife kept a low profile. It makes her even more fascinating all these years later. A major biography dedicated to her appeared in 1992. 2011’s The Paris Wife built on details surrounding the couple’s courtship and marriage, as well as their early days as struggling ex-pat newlyweds in Paris.

The tale feels romantic and authentic, though much of it is fiction.

We do know that the couple handed down the name to their only child, son John Hadley Nicanor Hemingway.

Between A Moveable Feast in 1964 and Paula McLain’s The Paris Wife in 2011, Hadley slowly became a possibility for girls. It debuted in the girls’ data set in 1964 with 7 births, though it had been used for boys in small numbers long before then.

The timing worked out perfectly. Holly and Heidi were gaining for girls in the 60s; Hayley and Haley would follow within a decade. 1964 marked the year Ashley debuted in the girls’ Top 1000 and started a long, steady ascent towards the Top Ten.

By 2011, of course, surname names for girls had gone mainstream. The darling of our moment, Harper, claims a literary connection, too. And other H choices, like Henley and Harlow, have gained in use.

The name originally referred to a field of heather, which must have been abundant in the UK. Plenty of places answer to the name, not just in England, but throughout the English-speaking world.

Notables bearing the surname are plentiful, though the one that sticks out in my mind is Tony Hadley, the lead singer of 1980s band Spandau Ballet. Cue the soulful sounds of True.

Eighteenth century mathematician John Hadley might make the more enduring reference. A massif on the moon is named Mons Hadley in his honor.

You’ll find a few men in the history books bearing with this as a first name, as well as a few born in recent years. It’s not exclusively masculine, either. Family surnames made common middle names for girls, too, during the twentieth century. Think of Nelle Harper Lee or Mary Flannery O’Connor.

Not only does it bring to mind Harper and Harlow, and sound like all of those popular ends-in-ley names, it also comes close to Addie and Hattie.

A handful of other references might come to mind. True Blood gave the name to a faerie. Barbie original movies have used it, too, for princesses in Barbie: Princess Charm School as well as Barbie in the 12 Dancing Princesses. Still, none of those references transforms the name into a pop culture powerhouse – or replaces the literary associations for many people.

Word is that The Paris Wife might be adapted as a movie. Should that happen, this name might experience a resurgence.

Reasons abound to consider this name. It feels tailored and feminine; might honor a Heather or even a Heath; and fits in with so many surname names for girls without being too very popular. That’s why it makes the list of Sweet Spot Girl Names – not too trendy, not too traditional. It makes a great name for a daughter born today.

What do you think of Hadley? Do you like it better for a boy or a girl?