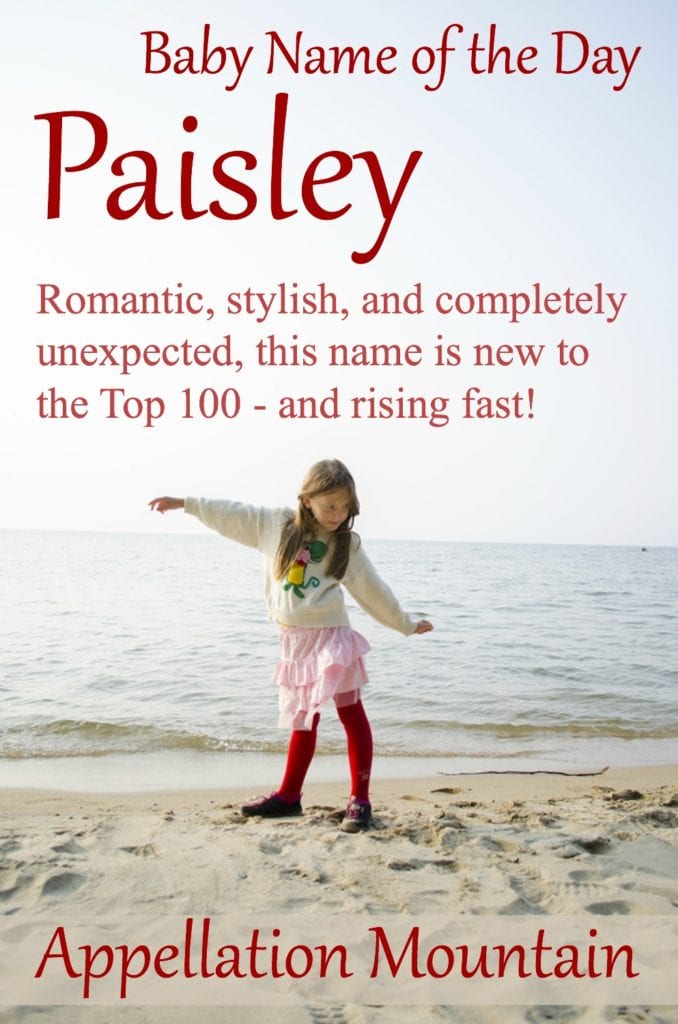 Romantic Paisley traveled from the ancient world to the 1960s. Now this unexpected name is heading towards the top of the popularity charts.

Thanks to Jamie for suggesting her friend’s name as our Baby Name of the Day.

Paisley: On the Map

Long before this name was linked to a pattern, Paisley was simply the name of a Scottish town. The town may have been religiously significant as far back as the seventh century, thanks to a community established by St. Mirren. By the 1100s, the town included an abbey, which still stands today.

By the 1800s, it served as a center for the weaving industry. More on that in a minute, because even though the mills closed by the 1990s, the name remains linked to textiles.

Paisley probably comes from passeleg or balsec, older words used to refer to a basilica, or church, though other possibilities abound.

The design we now call paisley started out in the ancient world. The pattern caught on in the West in the 1700s. That’s because the East India Company started importing fabric decorated with the motif.

Persia is often cited as the birthplace of the design, while others suggest ancient Babylon. However, we generally describe it as Indian, though the design’s popularity extends beyond.

The teardrop shape may symbolize eternity, or it may simply represent a bent cedar, a mango, or a floral motif.

Regardless of meaning, early importers couldn’t meet demand. So fabric mills began to produce their own versions. Thousands of weavers reproduced the designs in Paisley, and the pattern and the town came to share the name.

Place names often become surnames, and Paisley is no exception.

Country singer Brad is a well-known bearer of the name. Born in 1972, he recorded his first album in 1999. The singer appears to get credit for the name’s rise. That 1999 album included Brad’s first #1 single, “He Didn’t Have to Be,” a song about fatherhood. In 2001, the name was given to more than 100 girls for the first time ever. It has continued to gain since.

But Brad didn’t put the name on the map in the first place – so what did?

Paisley: By the Numbers

The name was first given to five girls in 1966.

That coincides with 1960s style, and the popularity of the pattern. But it also matches up with the career of Reverend Ian Paisley, the founder of Northern Ireland’s Democratic Unionist Party. 1966 marked the fiftieth anniversary of the Easter Uprising, an event that catapulted the minister into the spotlight.

Could the headline-making reverend actually have inspired parents? His positions were divisive, opposing civil rights for Catholics and sparking three decades of violence known as “The Troubles.”

So which influence explains the name’s rise? The summer of love, or the start of political unrest?

Or could it be:

Regardless of the cause, today it is simply among the hottest of the new 21st century names for girls. Since entering the US Top 1000 in 2006, Paisley has soared, reaching #45 last year.

How high will this name climb? Any guesses?