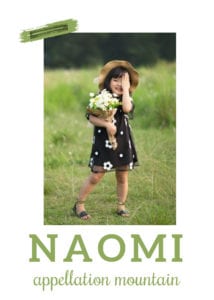 Thanks to Sassy for our Baby Name of the Day.

Chances are you know the bones of Naomi’s story. Her husband dies, as do her sons. But her daughter-in-law, Ruth, insists on staying by Naomi’s side. The widows travel to Naomi’s home, Judea, together. Ruth eventually remarries, and Naomi is finally a grandmother.

It’s easy to dismiss Naomi as bitter – after all, that’s what she tells everyone to call her. But she’s also a noble figure, earning Ruth’s loyalty. And she encourages Ruth’s marriage to Boaz.

There are many readings of Naomi’s story, some favorable to the figure. Others, not so much. Ultimately, she endures significant heartache and adversity to find a happy ending. That feels noteworthy.

While the name’s exact origins are uncertain, it’s probably cousin to the masculine Noam, meaning pleasantness.

Like many Old Testament gems, the baby name Naomi was rare for Christian families until the Protestant Reformation.

In fact, American parents have long embraced the name. Naomi has ranked in the US Top 1000 every single year since, dating back to the the charts’ beginnings in 1880. The name typically appears in the Top 300, and it has always made the Top 400.

Call it an almost, not-quite classic.

And yet that also makes the baby name Naomi feel less pinned to any one decade. It has been in steady use while Rebecca and Rachel, Sarah and Abigail, have trended.

Along the way, plenty of notable women have answered to the name, including:

Other figures, including athletes and writers, round out the list. 90210 and Private Practice both gave us fictional Naomis on the small screen.

Nao can mean honest or straight; the second syllable might mean beautiful or self. It’s unisex in Japanese; in fact, you might think of the explorer Naomi Uemura, famous for traveling to the North Pole, rafting the Amazon, peaking Denali – all on his own.

Speaking of mountains, the Wasatch-Cache National Forest stretches across Utah and Idaho. Mount Naomi sits in the forest, the highest peak in the Bear River Mountains.

Like many a Biblical name, Naomi occurs in many European languages. The Italian use Noemi; in French, the name becomes Noémie. The pronunciation changes slightly, but Noemi also appears in the US Top 1000.

Despite rising popularity, this name remains nicely distinctive. It feels feminine and substantial, traditional but not too expected.

Would you consider the baby name Naomi for a daughter?