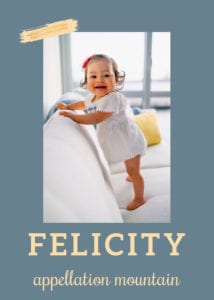 The baby name Felicity combines a gentle, antique appeal with an upbeat meaning.

At heart, the baby name Felicity belongs with the virtue names. It’s not quite as familiar as Grace, Hope, and Faith.

But neither is Felicity a newcomer, a new age virtue like Destiny or Journey.

Instead, like Felix, this name comes from the Latin felicitas, which means – as any Harry Potter fan knows – lucky or happy.

A minor Roman goddess known as Felicitas served as a symbol of Imperial Rome’s success.

Then there are the saints:

All of this lends cheerful Felicity quite a bit of substance.

The saints’ renown ensured that the names endured.

In the Middle Ages, the name became Felice in English. The Latin Felicia was also heard.

The lacy, elaborate Felicity developed a little later. We can thank the Puritans for this one. As they searched out names to set them apart from the rest of society, virtues appealed to them.

Data on given names pre-1880 is elusive. But we tend to think of Felicity as a historical favorite. That’s probably thanks to Felicity Merriman, the American Girl character introduced in a series of books in 1991.

And, of course, the American Girl doll was released the same year. The character grows up during the American Revolution. She’s a fiercely independent, horse-riding ten-year-old.

Just a few years later – right as those American Girl fans grew up and headed for high school – another fictional Felicity captured our imaginations.

In 1998, fictional Felicity Porter ditched Stanford to move clear across the county to New York. For four seasons,  we followed her adventures at the University of New York on Felicity, a break-out hit for The WB and for actor Keri Russell.

It pushed the name into the US Top 1000 for the very first time.

1999 also gave us Heather Graham as a Bond girl-esque character named Felicity in Austin Powers: The Spy Who Shagged Me.

After all of those late-90s pop culture references, the name peaked in 1999, only to slowly decline.

But then it made a comeback, rising again. Today it ranks in the 300s – meaning the baby name Felicity is at its most popular.

Overall, Felicity combines so many appealing traits. Take a great meaning, add in a stylish sound, and make it all nicely familiar, but still relatively uncommon. What’s not to love?

Would you consider the baby name Felicity? Do you think it will be more popular in the future?

Editor’s note: This post was originally published on July 2, 2008, and substantially revised and re-posted on June 4, 2012. Thanks to Saranel for the suggestion! Additional revisions took place on June 4, 2020.