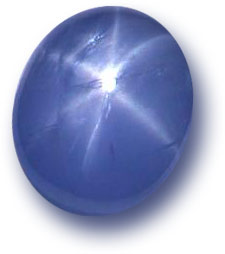 The 182 carat (36.4 g) Star of Bombay, housed in the National Museum of Natural History, Washington D.C., is a good example of a blue star sapphire. (Photo credit: Wikipedia)

We’re calling our daughters Ruby and Pearl … why not this gemstone names?

Thanks to Chante for suggesting Sapphire as our Baby Name of the Day.

It isn’t just Sapphire’s status as a gemstone, but her potential as a color name that intrigues.  There’s Beyonce’s baby girl Blue Ivy, plus mainstream favorites Scarlett, Violet, and Jade.  Other baby blue possibilities include Indigo, Azure, and Azura.  Color names are having a good run, and blue is a hue to watch.  Of course, sapphires can also be green and yellow and pink, but most of the time we think of them as, well, sapphire blue.

Sapphire comes from the Latin sapphirus, from the Greek word for blue stone.  The word has a long history of use, but it may not have always applied exclusively to the stone we know today.  There’s speculation that sapphirus comes from a Sanskrit word meaning sacred to Saturn.

Women named Sapphire are quite rare.  There was a minor character in Amos ‘n’ Andy, and a superhero in the DC Comics universe, born Candace Gennaro.

And yet there are some in US Census records.  Those parents may have been inspired by the Bible.  Sapphira appears with her husband Ananias in Acts of the Apostles.  Only she’s not exactly a role model.  First Ananias lies to Peter about money and falls dead.  Then Sapphira repeats the lie and meets the same fate.

Willa Cather wrote a novel called Sapphira and the Slave Girl, but her Sapphira isn’t admirable, either.

But sapphires themselves symbolize lots of positive attributes – heaven in the Middle Ages, truth, sincerity, and loyalty.  It is the birthstone for September and common in engagement rings – Prince Charles proposed to Lady Diana with a sapphire, the same ring Prince William passed on to Kate Middleton.  The gems are big with royals, and many notable sapphires have been part of crown jewels.

By now I might have convinced you to wear sapphires, but the case for the stone as a baby name is elusive.  And yet, Emerald seems wearable because of the easy short form Emme.  Could Sapphire benefit from the sound-alike names in favor today?

All of this suggests that while Sapphire is a daring name, it isn’t an outlandish one.  In the middle spot, she’d be brilliant.  As a given name, as long as she’s anchored with something more conventional in the middle, she’d wear reasonably well.  Not sure you dare bestow a gemstone as a given name?  Sapphira seems like an equally attractive option, just one step removed from the stone.