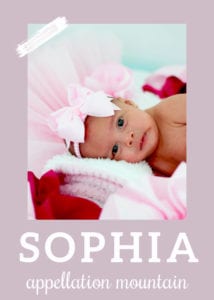 The baby name Sophia ranks among the most popular choices for girls worldwide. But did it all start with a big ol’ misunderstanding?

Despite flirting with obscurity in the 1940s and 50s, Sophia feels nearly as enduring as Katherine, Mary, Elizabeth, or Anne.

It entered the US Top Ten in 2006, and held the #1 spot from 2011 through 2013. Factor in Top 20 Sofia and Top 100 Sophie, and it’s easy to imagine this is a generation-defining name. And yet, that doesn’t diminish the sense that the baby name Sophia will endure.

After all, it appears in royal families beginning in the 1300s; is used as a character name in eighteenth century literature; and belongs to twentieth century notables like Sofia Loren.

Not only does the baby name Sophia come with all that history, but it also offers a great meaning: wisdom. It survives in our vocabulary today. Think of the word philosophy – philo (love) plus sophos (wisdom).

A feminine name with a strong meaning – feels like an unbeatable combination, right?

That’s the source of the error, too.

We list Saint Sophia among the earliest martyrs, usually dating to the second century, but sometimes later. Her story goes like this: she had three daughters: Faith, Hope, and Charity, their names inspired by St. Paul’s letter to the Corinthians. They converted to Christianity, back when such beliefs carried a death sentence. The sisters were tortured to death, while Sophia died of her grief.

But here’s the twist.

In 360, a basilica in Istanbul was named Hagia Sophia – holy wisdom. For more than eleven centuries it served as a Christian church, and then became a mosque for five centuries more. (Today it is a museum.)

Along the way, it was assumed that the structure was dedicated to Saint Sophia.

At the same time, we know that early Christian women often took theological virtue names like Sophia or Fides (faith). It’s easy to imagine, just a few centuries later, reading these and assuming they’d been given names in commemoration of a saint.

But by the sixth century, the veneration of the mother and daughters was spreading.

Pilgrims to the Holy Land learned their names. The pious – and powerful – Queen Theodelinda of the Lombards was gifted some of Sophia’s relics by the pope, spreading the story farther.

German and Austrian nobles may have been the first to embrace the name. It spread across Europe. The most famous royal of the moment might be the Countess of Wessex, born Sophie Rhys-Jones. The former Queen of Spain is also Sofia; as is her granddaughter, Infanta Sofia, second in line to the throne.

Sophia Jex-Blake advocated for women’s access to university educations in the UK, and became the first practicing female doctor in Scotland. And the nineteenth century also gave us Sofya Kovalevskaya, a Russian mathematician who became the first woman appointed to a full professorship in Northern Europe.

In the 1980s, Sophia became – appropriately enough – the most senior of the Golden Girls. Sophia, mom to Dorothy, was known for her blunt, merciless one-liners. (Fun fact: Estelle Getty, who played Sophia, was actually one year younger than Bea Arthur, who played her daughter.) If a little old lady sounds like a deal-breaker, consider this: Sophia wasn’t a grandmother; she was a great-grandmother, supposedly eighty years young when the series debuted. That makes Sophia prime for rediscovery. It’s likely that many who came of age when the Golden Girls still aired on prime time eventually gave the name to their daughters.

More recently, you might think of actor Sofia Vergara and director Sofia Coppola.

A number of places bear the name Sophia, too. Bulgarian capital Sofia started out as Serdica and Sredets. But as early as the 1300s, it took the name of Saint Sofia Church. The church site dates to the fourth century, and the current building was constructed in the 600s.

Speaking of maps, it’s worth noting that the name is sometimes pronounced with a long ‘i’ sound rather than an ‘ee’ sound. But today, that’s quite rare.

A picture emerges of Sophia: a name widely used across cultures and over time, with a great meaning and plenty of appealing associations. It sounds vintage and sophisticated.

So it’s surprising to realize that the baby name Sophia never appeared in the US Top 100 until 1997.

Sofia spent years in obscurity, barely cracking the Top 1000 much of the time. It gained in use beginning in the 1970s, and entered the Top 100 in 2003, just a few years after Sophia.

It’s actually Sophie – the French form – that enjoyed more popularity around the 1910s, though it, too spent many years hibernating. Sophie followed Sophia and Sofia into the Top 100 in 2007, but remains the least popular of the three. That reverses the trends of a century ago.

One key to the baby name Sophia’s success? It cross cultures seamlessly. Combine the ‘ph’ and ‘f’ spellings, and the name is popular throughout Europe, as well as the English- and the Spanish-speaking worlds. Like Isabella, the name’s ability to work in English and Spanish makes it particularly popular with many bilingual families.

Despite this wild run of popularity, Sophia feels more classic than trendy. Yes, a lot of girls share the name. But it’s easy to see how it appeals to so many families.

Would you consider the baby name Sophia for a daughter? Do you prefer Sophia, Sofia, or Sophie? 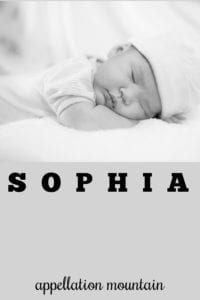