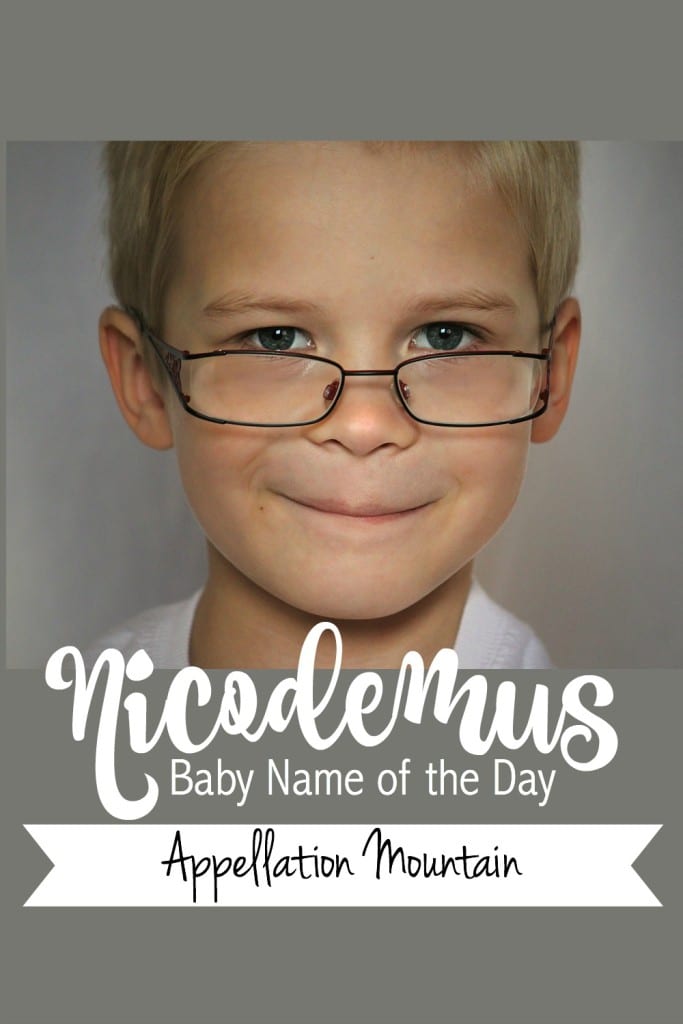 Nicodemus is a rarity with Biblical roots and go-to nicknames. Is this the perfect stands-out/fits-in choice?

If you know your Nic- names, then you probably guessed that this name means victory, as in the Greek nike. The second element is demos – the people. It’s a triumphant, bold meaning.

But Nicodemus doesn’t necessarily sound bold. Unlike brisk, modern names like Jax or Archer, it has a reserved, even scholarly. tone. I’d almost call it a Neville name.

Or maybe that’s the New Testament figure’s influence. The Biblical Nicodemus is known for helping bury Jesus. Speculation suggests that he’s an older man, though the Gospel of John doesn’t specify. It’s also possible that he’s the same figure as a holy man mentioned in the Talmud.

San Nicodemo da Ciro is a saint from Calabria, Italy, who lived in the tenth century. He established at least one new monastic community.

The name is also found on the other side of Europe, in Sweden, seven hundred years later. Nicodemus Tessin was an Pomeranian-born architect who made his name in Sweden before studying and working throughout Europe. Drottningholm Palace, which he designed, is a world heritage site. His son, known as Nicodemus Tessin the Younger, picked up where his dad left off.

The name continues to surface, in Serbia and Germany, Greece and Russia and Quebec, over the centuries. It’s never a very common name, but neither does it become extinct.

There’s a character by the name in Charles Dickens’ Our Mutual Friend, though he’s called Noddy, and another in one of his short stories.

If you’ve heard the name any place other than the Bible, it’s probably from Mrs. Frisby and the Rats of NIMH, first published in 1971. It won a Newbery Medal, and then was adapted as a movie in 1982, retitled The Secret of NIMH.

Mrs. Frisby is a field mouse trying to save her home from the farmer’s plow. A group of former lab rats come to her aid. The rats were part of experiments at the National Institute of Mental Health – NIMH – and learned a tremendous amount from the human scientists. The rats can read and write and engineer – they got smart enough to escape the lab, and they are able to come to Mrs. Frisby’s aid. Nicodemus is one of the rats.

In 1877, following the end of the Civil War, a group of former slaves established a community in Kansas, a safe haven for those fleeing the South.

Where did the name come from? Possibly from the Biblical figure, but others say that it’s from abolitionist Henry Clay’s 1864 poem “Wake, Nicodemus.”

While the settlement never developed into a city, the original buildings are part of the National Park Service, and there’s something compelling about the story – it matches up with the name’s meaning quite nicely.

Despite all of this history, Nicodemus remains rare.

It’s much rarer than Nicholas, which peaked in the 1990s, but remains a Top 100 pick for boys. Many a long, Biblical boy’s name has cracked the Top 1000, including Hezekiah (#774 in 2014) and Zechariah (#671). The equally ancient Atticus became a literary darling, and other long names, like Sebastian and Nathaniel, are well-estabslihed.

Would you consider Nicodemus for a son?