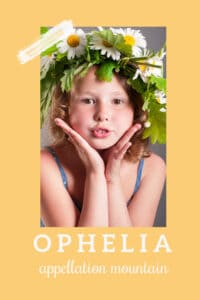 The baby name Ophelia is an elaborate, literary gem, continuing to rise in popularity.

Chances are you know something about William Shakespeare’s Hamlet, if only famous snippets like “To thine own self be true.”

You probably also know that Ophelia is the ill-fated girlfriend of the Prince of Denmark.

The name means help or aid, from the Greek word ophelos.

Italian poet Jacopo Sannazaro used it for his 1480 poem Arcadia, with the spelling Ofelia. Sannazaro wrote about leaving the city for the countryside.

Sannazaro was widely read, and it is likely that Shakespeare borrowed the name from Arcadia.

After all, Hamlet’s Ophelia needed a lot of help.

Her story is one of an innocent girl, who suffers mightily, goes mad, and ends the story in a watery grave.

Some suggest that Shakespeare based part of the story on an accidental drowning of another girl in the Avon River. (There are two candidates, though their names are Jane and Katherine.)

The tragic character has been painted by artists, referenced in novels, and ultimately became the symbol of teenage girls’ struggles in Mary Pipher’s 1994 bestseller Reviving Ophelia: Saving the Selves of Adolescent Girls.

The name speaks volumes – about the hazards of love, the nature of young women, romantic ideas about death, and depictions of insanity.

This Ophelia is capable of offering the Greek ophelos to the enslaved characters in Stowe’s novel. She’s white and wealthy, a Vermont native who opposes slavery when she arrives in the New Orleans household of her cousin. And she does tutor a young enslaved girl in their household.

During the course of the novel, Ophelia changes, committing to shedding her prejudices. Stowe likely intended Ophelia as a model for her readers, showing how Northerners content to accept slavery in the South could revisit their beliefs.

The baby name Ophelia wasn’t all that unusual back in the day.

It wasn’t until the 1960s that the name fell into disuse.

It’s not that adaptations of Hamlet slowed. Indeed, Richard Burton famously played the prince during the 1960s. A television adaptation cast popular folk singer Marianne Faithfull in the role.

But the name changed, now sounding fusty and antique or even outlandish.

The name might’ve been forgotten entirely, at least in English.

But it wasn’t so elsewhere.

In fact, the French form of the name – Ophelie – peaked in popularity during the 1990s, rising in use in France just as Ophelia cratered in the US.

Other potential variations include Ofilia and Ovelia, though they’ve never caught on as baby girl names in the US.

And then along came a movie, using the Spanish and Italian version of the name – Ofelia. Pronunciation is different. In Spanish, it’s oh FAY lee uh.

Her life becomes entangled with a fairy tale against the backdrop of 1940s Spain.

The movie became a sensation, garnering international acclaim and making many best-of lists.

There’s a small uptick in the use of the name Ofelia in the US following the movie’s release. But it’s even more true for the baby name Ophelia. In 2006, 47 girls received the name. By 2008, there were 101 newborn Ophelias.

English actress Ophelia Lovibond helped raise the name’s profile, too.  She played Carina in Guardians of the Galaxy in 2014, and later appeared in Elementary, Minx, and This Sceptered Isle.

Dave Grohl gave the name to his youngest daughter in 2014.

In 2015, E!’s first original series, The Royals, featured a character by the name. The series was originally based on a 2011 novel by Michelle Ray, Falling for Hamlet, which updates the doomed couple’s story and tells it from Ophelia’s perspective. The E! series quickly moved past the original plot, and sent Ophelia to America.

The biggest boost came in 2016, when folk rock band The Lumineers released “Ophelia” as a single from their sophomore album Cleopatra.

“Oh Ophelia, you’ve been on my mind girl, since the flood.”

It was a big enough hit to boost the name.

But it’s not just the success of the song.

It’s also the name’s stylish sound. We’re in the era of Olivia and Amelia. Feminine, ends with -lia names are favorites today.

A lack of nicknames might hold Ophelia back just a little. Ophie is a non-starter. Lia – or Leah –  works, but isn’t quite as obvious. Phelia sounds just like Feel-Ya. In the Flavia de Luce mystery novels, her sister Ophelia is called Feely, taking it even further.

But that’s a minor consideration.

With an impeccable literary pedigree and long history of use, Ophelia almost reads like a neglected classic name. It’s distinctive, elaborate, and unforgettable.

If you’re after a literary name with presence, the baby name Ophelia is one to consider.

Would you consider the baby name Opehlia for a daughter? 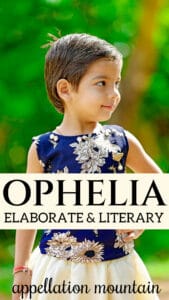 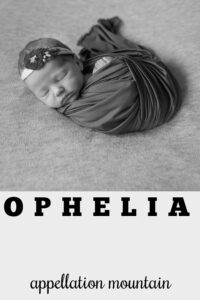