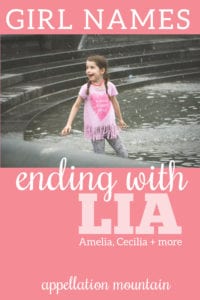 Girl names ending in LIA dot the popularity charts. There’s Amelia, of course, and Emilia, too.

But beyond those two powerfully popular picks, dozens of alternatives await.

Like Amelia, girl names ending in LIA often feels vintage and feminine. They offer plenty of history. But unlike Amelia and Emilia, they’re far less likely to repeat on the playground.

Of course, the LIA ending doesn’t sound exactly the same in every name. (And some names can be pronounced more than one way!) Some sound like lee-uh, others lay-uh, and others, too.

And, of course, just Lia is a name, too. It’s a romance language take on Biblical Leah or a logical nickname option for many of the girl names ending in lia.

From the familiar but not common, to the truly rare, there’s something on this list for every namer.

The most traditional spelling of this name might be the Arabic Aaliyah, introduced to the world by a tragically short-lived pop singer. Plenty of other spellings are in use: Aliah, Aleah, Aliyah, Aleaha. The more classic Aaliyah has ranked in the US Top 100 since 2001. Alia Shawkat played Maeby on Arrested Development.

The scientific name for honeysuckle, and an unconventional way to get to Abby. It could also serve as a feminine form of Abel.

Myth gives us the founders of Rome, twins Romulus and Remus. This name belonged to their seldom-mentioned foster mother.

An unusual form of Adelaide and company.

Back to Ancient Roman for Aelia, a feminine form of the family name Aelius.

Three similar-sounding names with intertwined roots, Amelia leads the pack. But Emilia has gained in recent years, and Amalia is on parents’ radar, too.

According to legend, Saint Anatolia was a third century Christian who resisted marriage to a pagan man. While she was popular in Italy, her name brings to mind Turkey – it’s another name for Asia Minor.  It offers a great meaning: sunrise.

Araceli is a Spanish epithet for the Virgin Mary, from the Latin phrase “altar of the sky.” There’s a tiny town called Arcelia in Mexico. But while Araceli has seen some steady use, the LIA ending versions of the name remain uncommon.

An Old Testament Queen of Judah, Athaliah went to great lengths to preserve her family’s reign.

Remember the Amelia Bedelia books, about a bumbling, but good-hearted, housekeeper? Bedelia was once an affectionate form of Bridget – though today it’s quite rare.

A cousin to Calla – as in the lily – as well as the Greek mythological name Callisto.

A bold botanical with the easy nicknames Cammie and Cam. The similar-sounding Camila is far more popular, but that could help these LIA-ending names seem like something just slightly different.

From the rollicking Simon and Garfunkel song to the vintage sound and easy nickname Cece, Cecilia could be a great alternative to Amelia.

Celia looks like a cousin to Cecilia. But the shorter Celia has a different origin and a literary sheen, thanks to Shakespeare’s As You Like It.

It looks like the proto-Chloe.  Except a sharp-eyed reader pointed out that Cloelia would have been pronounced without the ‘o’ – Clelia. That might be a little less appealing. Then again, Cloelia was quite the figure in the ancient world.  A Roman taken hostage during war, she led a successful escape, impressing both her captor and the people of Rome with her bravery.

Lear’s loyal daughter, and another Shakespearean name. How can it be that Cordelia doesn’t rank in the US Top 1000?

In the Star Wars universe, Corellia is Han Solo’s home planet. But names like Corelia and Caralia have been heard over the years, too, making Corellia ony slightly sci fi.

Dahlia is a straight-up floral choice, inspired by the Swedish botanist, Anders Dahl. It’s the national flower of Mexico, which leads to Dalia – the Spanish spelling of the name.

Then there’s Delia, a goddess name related to Artemis and sometimes used in poetry and made famous by a tragic tale immortalized in song by Johnny Cash.

An almost inevitable creation in our age of Ella and Amelia.

The Greek ‘eu’ means good – leading to lots of names, from Eugene to Eudoxia.  Eulalia means good talker, and Saint Eulalia is the patron saint of Barcelona. Eulala and Eulalie are heard, too.

Take the spare, Biblical Eve and the Latinate Eva, take on -lia, and the girl names ending in LIA list gets a little longer. With so many Ev names in favor, they’d be very wearable, if quite rare.

Along with Bedelia, this one isn’t likely to be heard anytime soon. And yet, her meaning is lovely – faithful, from the Latin fidelis. Beethoven’s only opera was called Fidelio.

Among the most classic and enduring names on this list, Julia is yet another Roman name. Timeless and elegant, Julia has never left the US Top 200. Giulia is the Italian spelling.

Oh, all the Lily names! While Lilia and Lillia remain relatively rare, they fit right in with Lily and Lillian, as well as all these LIA enders.

A romantic floral, recently back in the US Top 1000 after a long hiatus.

A straight-up hero name, thanks to Mahalia Jackson, civil rights activist and the Queen of Gospel. It comes from the Old Testament Mahlah, used for both men and women.

Former First Daughter Malia Obama put this name on parents’ radar. It could be an invention from so many similar-sounding choice, but it also acknowledges the Obama family’s Hawaiian roots, as it is the equivalent of Mary.

A pan-European choice, Natalia comes from a Latin name meaning “Christmas Day.” American parents have tended to use French form Natalie instead, but Natalia has caught on in recent years.

Natalia is the obvious Christmas season choice, but Noelia carries the same meaning.

Two names related to Otto, Odelia and Odilia fit with other rarities like Odette and Ottilie. For the right family, they could be perfect.

Shakespeare made her tragic, but Ophelia’s gorgeous sound and stylish LIA ending makes it worth reconsidering.

A rare Ro- name that brings to Romeo and Roman.

A rare Rose name, Rosalia belongs to a twelfth century Italian saint, said to be descended from Charlemagne himself.

With roots in Hebrew and Greek, it’s tough to pin down this appealing name. Thalia was one of the nine Muses in Greek myth; Talia Shire played Rocky’s beloved wife Adrian in the long-running movie franchise.

We typically think of Wilhelmina and Willa – and lately even Willow – as feminine forms of William. But drop the ‘m’ and this name works for a daughter, too.