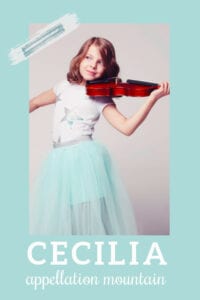 Thanks to Dan for suggesting our Baby Name of the Day.

If meaning matters, the baby name Cecilia comes up a little short.

It comes from the Roman family name Caecilius, from a Latin word meaning blind.

The first Caeculus was the son of Vulcan in Roman myth, abandoned by his mother as a child, but eventually growing up to be a king. The family claimed descent from Caeculus, and female members of the family answered to Caecilia.

Among their members were many consuls and other powerful leaders of the late Roman republic.

The Roman clan name is also one possible source for Cecil. Though chances are Cecil comes from a Welsh given name. And it’s the surname – and the noble Cecil family – that inspired the surname’s adoption as a first. The family’s roots are Welsh, and the name started out as Seisyll, from another Roman family name, meaning sixth.

Cecilia might also be used as a feminine form of Cecil.

But this name’s popularity has far more to do with the saint.

Saint Cecilia also deserves credit for reshaping our perception of the name’s meaning.

According to legend, Cecilia was a faultless noblewoman of Rome – born blind – sometimes in the second or third century. A devout Christian, she convinced her pagan husband to convert. Both died for their faith under persecution.

So where does music come in? During their wedding, Cecilia said that she sang to God in her heart.

Legends around the martyr saint were firmly established by the Middle Ages, and she’s been strongly associated for at least a millennia, and possibly twice as long. Cecilia is considered the patron saint of music.

Other associated meanings include:

Handel composed the Ode for St. Cecilia’s Day, one of many works dedicated to her. Rome is home to the Accademia Nazionale di Santa Cecilia – one of the oldest musical institutions, founded in 1585.

But even outside of a religious context, we tend to associate the baby name Cecilia with music.

When it comes to names in song titles, most of us will think of Simon & Garfunkel’s enduring single “Cecilia” from their 1970 album Bridge Over Troubled Water. It’s a bouncy, upbeat song. And while it’s not exactly a lullaby or a sing-along for your toddler, it’s the kind of song that adds to the name’s appeal.

While the baby name Cecilia doesn’t appear on lists of classic girl names, it has a long and steady history of use across languages and cultures.

History lists Cecilia of Normandy as the eldest daughter of William the Conqueror and Matilda of Flanders, born around 1056.

The Normans brought the name to England, where the everyday use form would’ve been Cecily, while the Latinate form Cecilia would’ve been reserved for written records.

In twelfth century Sweden, King Canute I married Cecilia Johansdotter. Her biography – in fact even her name – is poorly documented. But other Swedish royals have answered to the name since then.

Factor in Cecile and Cecilie, and plenty of royal families have used variations of the name.

In more recent years, characters named Cecilia have appeared in novels-turned-movies The Virgin Suicides and Atonement. It’s also the name Jim and Pam gave their daughter on The Office.

The name has enjoyed steady, if sparing, use, across the English-speaking world.

One notable Cecilia? The grandmother of the current Queen Elizabeth II.

Their firstborn daughter, Princess Elizabeth of York, became her father’s heir. When she assumed the throne in 1952, her mother became known as Queen Elizabeth the Queen Mother, to avoid confusion.

The Bowes-Lyon family has used the name Cecilia for succeeding generations, but it’s yet to be heard in the royal family.

Strictly speaking, Celia is a separate name. It comes from yet another Roman clan name, this one meaning heaven. But it is sometimes heard as a short form of Cecilia.

Cece – or Ceci or Cici – are options, too. So are Celie and Sissie/Cissie.

Sheila is the Irish form of the name.

With names like Olivia and Amelia and Sophia and in the current US Top Ten, it’s not surprising that Cecilia, too, is on the rise.

One factor may be spelling. A century ago, Cecelia and Cecilia were used in nearly equal numbers. That makes true popularity tough to gauge.

As Catholic saint names go, the 3rd-century martyr is accessible – both for current style and for the connection to music. That may influence some families to consider the name.

But with Cecilia’s timeless style and on-trend sound, long history of use and relatively uncommon status? It’s not surprising to hear more parents considering this lovely, musical choice.

What do you think of the baby name Cecilia? 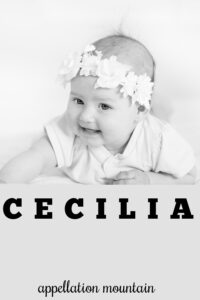 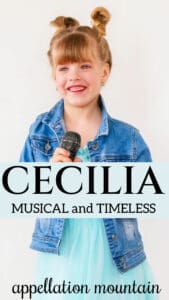