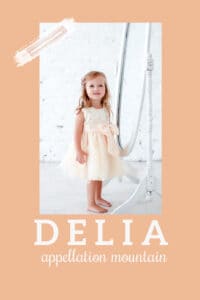 Thanks to Haley and Caroline for suggesting our Baby Name of the Day.

When names like Savannah and Brooklyn entered the US Top 1000, some called it a new trend. Except we’ve been naming our children after places for millennia.

The Greek island of Delos lies in the Aegean Sea. It means brilliant. Greek myth made Delos the birthplace of the twins Artemis and Apollo. Temples were built in their honor, and today the island and its ruins appear on UNESCO’s World Heritage List.

The goddess Artemis sometimes answered to Delia, a reference to her birthplace. The goddess of the moon, a famous huntress, and more, she remains one of the best known figures from Greek mythology.

First century poet Tibullus composed works dedicated to Delia. In that case, the given name Delia appears to be a pseudonym for a (possibly married) woman he loved.

William the Conqueror brought an entire class of names to England, used in what would become the Anglo-Norman language, a dialect of Old Norman French the invaders brought with them to their new home. It changed and evolved over time, and with it, names.

Adelia doesn’t seem to appear specifically in the historical record. But two daughters of King William answered to Adel- names: Adeliza, or maybe Adelida, about whom little is known, and Adela, who became a countess through marriage, ended her days in a convent, and is now considered  a saint.

There’s no question that Adel- names, like Adeline, were well-used throughout Europe, including England, for centuries.

During the Renaissance, poet Samuel Daniel chose the ancient name for his idealized beloved. Maybe Daniel was inspired by the ancient poet.

Or perhaps Artemis, a perpetual maiden who protected mothers and children but swore to remain single herself, served as inspiration.

At some point, the name caught on. US Social Security birth records begin in 1880, when the name ranked its highest ever. It remained in the US Top 200 for another fifteen years.

Edith Wharton gave the name to a character. So did James Joyce.

There’s a controversial Shakespeare scholar named Delia Bacon who was, perhaps, the first person to suggest that someone other than the Bard wrote his plays.

During the nineteenth and early twentieth centuries, we find British composer Derbyshire, Italian ballerina Scalla, and Argentine actress Garces. The variety suggests sparing, but steady and global use of the baby name Delia.

A song gives us one possible reason.

Johnny Cash recorded “Delia’s Gone.” He even made a video for the song in 1994, featuring Kate Moss. He wasn’t the first, either. Versions of the song have circulated for decades, with everyone from Cash to Bob Dylan to Pete Seeger covering it in one form or another. It

You would expect a song might boost a name, especially a name with this much appeal. But the lyrics tell a tragic tale.

As a result, this Greek girl name feels sweetly Southern, but also, perhaps, a bit mournful.

Songs about the tragedy date to at least the 1920s, and the name’s popularity clearly declines during the twentieth century. But is it all down to this sad story?

Except it might not have anything to do with the song.

Celia fell in use during the same time period. Other names ending in -elia also decline during the twentieth century: Shakespeare’s tragic Ophelia, ancient Cornelia, the British(ish) Cordelia, Adelia, and Odelia – possibly more.

The grand dame of girls’ names ending with ELIA? It’s Amelia, of course, that vintage favorite. Just like the rarer names, Amelia fell in use steadily most years into the 1970s. It didn’t really recover until the late 1990s/early twenty-first century.

Led by Amelia, many of these names have made a comeback in recent years. Some hibernated for so long that they feel like complete discoveries.

Speaking of discoveries, lush and romantic flower name Dahlia sounds vintage, but actually debuted in the US Top 1000 in 2006. It sounds very similar to Delia, so maybe that opens the door for Delia’s comeback, too.

Likewise, Biblical Delilah has never been more popular than it is today.

DELIA from the 90s to NOW

Some of it is the rise of Amelia/Delilah/Dahlia. Plus, ends with LIA names are having a moment.

But it’s also true that the 100-Year Rule suggests that any name big a century ago should sound fresh and new today.

The numbers aren’t there yet; 221 girls were named Delia in the year 2000. As of 2021, that number had continued to drop, reaching 146 girls given the first name Delia.

One good fictional character, celebrity birth announcement, or pop song could change that. But, for now, Delia remains an overlooked vintage charmer, rich in history, but seldom heard.

That might make it the perfect choice for parents seeking a feminine names with deep roots that fits in, while still standing out.

Would you consider the baby name Delia for a daughter? 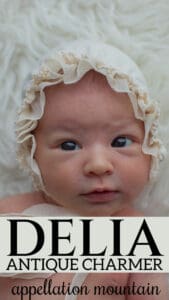 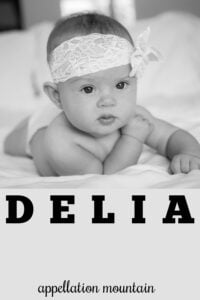