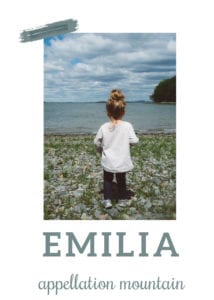 The baby name Emilia has been among the fastest rising names in recent years.

With history galore, a stylish sound, and a famous actor to boost it, no surprise we’re hearing more and more of this on-trend name.

Strictly speaking, the baby name Emilia – this spelling – comes from the Latin aemulus – rival. We know it as Emil and Emily.

In English, we’ve conflated Emily and Amelia since at least the 1700s. That’s when George I, of the German House of Hanover, became King of England. His granddaughter, Princess Amelia Sophia Eleanor, became known as Emily in their family’s new home.

The names continue to tangle their roots. Amalia is pronounced differently in American English than Amelia. But Emilia? It sounds exactly like the latter.

From the 1880s into the 1940s, the baby name Emilia appeared in the US Top 1000 in relatively small numbers. Amelia nearly always ranked higher, as did Emma, Emily, Amy, and lots of other names with shared sounds.

It’s not clear if the names were understood as separate. We know that Emilia – this spelling – has notable uses, including:

You’ll find the name in use across Europe, as well as South America. Notable women by the name might be Swedish or Slovak, Chilean or Finnish.

In fact, it’s been crossing cultural and linguistic barriers for centuries. Way back in 1569, a Venetian musician at the court of Queen Elizabeth I married an Englishwoman. They named their daughter Aemilia Bassano, and she became Emilia Lanier, the first Englishwoman to become a professional poet.

Despite all of this, the name had nearly disappeared in the US until the 1980s.

What explains the baby name Emilia’s rediscovery? Credit goes to the rise of Emily, and later Emma. They opened the door for similar names to be considered. By the late 1980s, Emily had joined the Top 20, and Emma was marching towards the Top 100, and, of course, eventually the #1 spot.

Amelia shows signs of a comeback in the same era, though it lagged behind the Em- names.

Girls’ names ending with -lia have become a sensation in recent years. Factor in the -ias, and they’re among the most dominant sounds of our age.

Then along came an actor by the name. Emilia Clarke became a household name in 2011, as Daenerys Targaryen in HBO’s Game of Thrones. Even if you’ve never seen an episode, you almost certainly recognize the white-blonde hair character, who evolves from timid princess to warrior Mother of Dragons, and earns the title Khaleesi.

Clarke’s not slowing down, either. From Solo: A Star Wars Story and Me Before You to Last Christmas and the upcoming Murder Manual, she’s frequently seen on the silver screen.

No question that the baby name Emilia rivals its sound-alike cousin. An alternative to any of the Em- names, with more history than some, it’s easy to imagine parents seizing on this name as similar, but just different enough.

And yet, lots of similar names are on the rise at the moment. So call this out on a playground, and your daughter may not be the only one to answer.

Still, there’s one thing about Emilia that might especially appeal to parents. Rival sounds rather intense, but some sites interpret it differently. Rather than the name meaning “rival” it could mean “to rival” as in “trying to equal; to excel.”

THE NEXT BIG THING?

Amelia ranks in the Top Ten. Could Emilia reach such heights, too? Maybe. Some pronounce the names differently; others see Emilia as a fresh spelling alternative.

While both share nickname options, like Mia, Millie, and Lia, Emilia also opens the door to Emme.

Overall, it’s a name that feels like as sophisticated as Sophia, as current as Emma, and as romantic as Isabella. No surprise that it’s entered the US Top 100. The only question is how high it might climb.

What do you think of the baby name Emilia? Do you prefer it to Amelia?